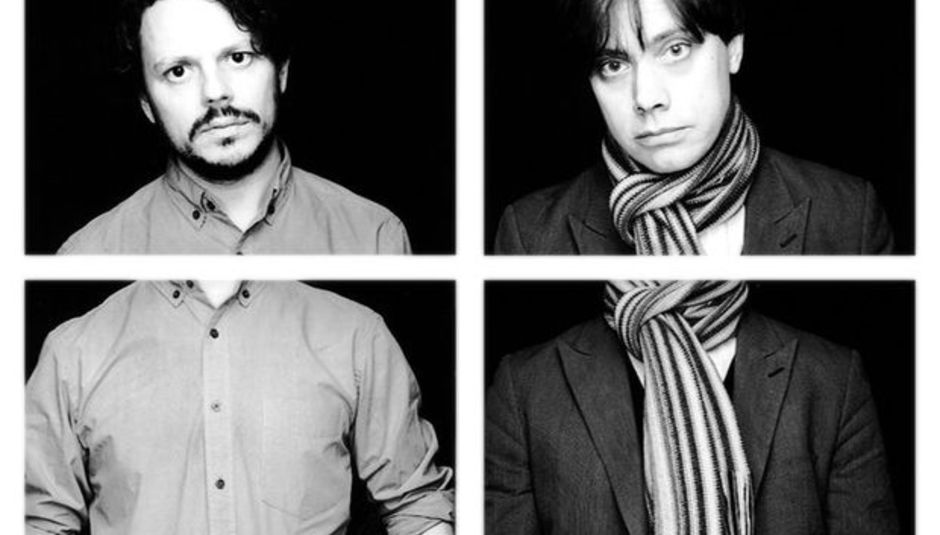 Planet Gear: The Boy Least Likely To on recording The Great Perhaps

Planet Gear: The Boy Least Likely To on recording The Great Perhaps

'Planet Gear' is an irregular feature on DiS in which we ask musicians to get a bit geeky and talk us through the equipment that makes the 'magic' happen... Here, The Boy Least Likely To talk us through the making of their fourth album, 'The Great Perhaps'.

Eighteen months ago, Jof and I opened negotiations about making the fourth Boy Least Likely To album. The band was 8 years and 3 albums old and I didn’t want to make a record that sounded like anything we’d done before. Without a second thought, the banjos, glockenspiels, recorders and guiros were all consigned to the dustbin. Jof, being a practical type of guy was worried.

“What are we going to make music with?” he asked.

“Don’t worry” I said confidently. “Something will turn up”.

I started off tinkering with a Korg Monotribe. The fact that I wasn’t constrained to a Mac and a mouse made a huge difference to me, and being able to alter stuff in real time meant that I was playing an instrument instead of programming automation. The studio runs Pro Tools 8 HD and the first track we recorded was “I Keep Falling In Love With You Again”.

Featuring the Monotribe and an overload of Casiotone and Casio CZ101 keyboards with a fun Omnichord arpeggiator bubbling throughout, it felt like an age in experimenting - but we’d finally got the fresh start we were looking for. The mix was particularly tricky; I basically buggered it up first time round. I was mixing on a new pair of Barefoot Sound MM35 monitors and couldn’t get my bearings, which left us with a timid bass lite dribble of a track. Lessons had to be learnt. The two other major sonic contributors to this album were the Moog Voyager and Dave Smith Instruments Tempest drum machine. For me, the sound coming out of these boxes was a revelation. Head and shoulders above anything I could get from a soft synth - using them was a real eye (or ear) opener. I didn’t have to work hard to make it sound good- it was just there. I guess that’s what you pay for. I used a Telefunken AK47 going through a Retro Instruments Powerstrip to record all of Jof’s vocals to basic backing tracks (acoustic guitar and click track). When it was clear which tracks were to make the final album, we drafted in engineer Jamie Johnson to help me finish off the rest of the recordings. We first worked with Jamie on Law Of The Playground and having that fresh perspective from someone you trust is invaluable.

The Tempest was on everything apart from two tracks, “Michael Collins” and the first single “Climbing Out Of Love”. I’d wanted to make the entire album with a drum machine but was seriously struggling to get some vibe into these two numbers. Ben Chetwood saved the day with some amazing drumming, bringing the tracks alive when I had all but given up hope.

We recorded a string trio for two tracks – “Michael Collins” and “It Could’ve Been Me”. Inter stellar greatness was added to “Michael Collins” but as good as the part and playing was on “It Could’ve Been Me” I just couldn’t reconcile myself to the sonic juxtaposition of real strings with the analogue and synthetic backing. It really disturbed me, so they had to go (along with a chunk of the recording budget).

I ended up playing all the bass lines on a bass guitar, loading them into Melodyne and exporting them as midi files and then running them through the moog. This gave me some lovely fat even sounds that I just couldn’t get by playing them on my squeaky old Squier bass.

As for outboard gear, I love putting the vocals through the Empirical Labs Distressor, and all the acoustics go through the UA 1176. The spring reverb on the RE201 was used a lot, but I couldn’t have done without Alti Verb . The Great Perhaps is out on April 29th.

In Photos: James Blake @ Manchester A...