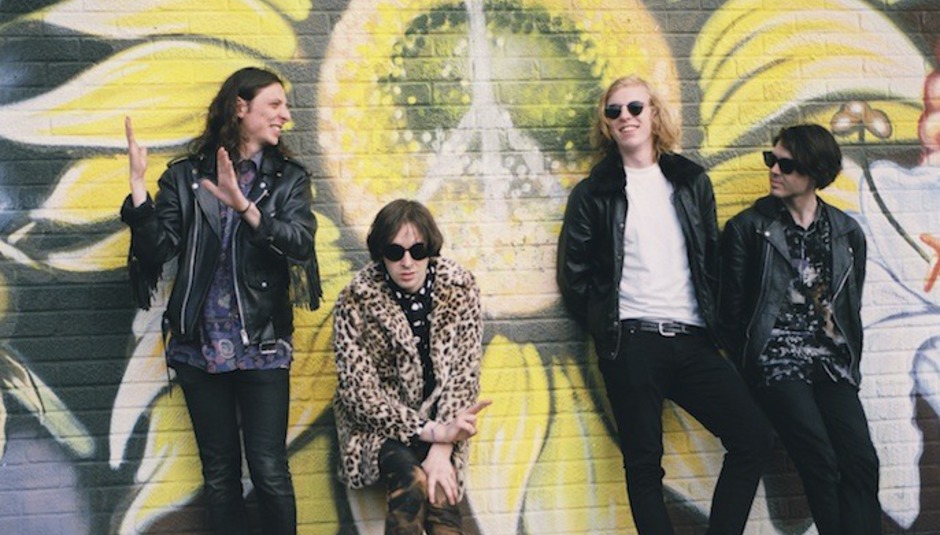 Hello. It's Monday, which means it's time to put the binge drinking, kebab noshing and other acts of weekend hedonism on hold in order to crack on with important spreadsheets and stuff. Salvation is at hand however, in the form of seven stonking singles. Our favourite is by Peace but they're all special in their own unique ways. Apart from the Azelia Banks track - that one's rubbish.

Every band worth cherishing reeks of one irrepressible trait: the overwhelming impression they could fall apart at any given moment. Judging from scurrilous second-hand gossip and the way they fill their videos with gratuitous arse shots, there's no doubting that Peace are a complete liability to themselves and others. Somehow, they've released the best trio of singles by a British band since lord knows when.

This golden run will be finite. Given 'Follow Baby' is technically a re-release, it may already be over. Harry Koisser's howl of "we gon' live forever" is a fitting manifesto for a band who deem leopard fur jackets and bowl-shaped haircuts to be acceptable lifestyle choices.

Give Peace a chance and you'll be gurning along too, like an unruly schoolboy with a fag in one hand and a detention slip in the other. Their swaggering tidal wave of grunge power chords and blithe harmonies is an open invitation to bask in the glow of youthful decadence. As Birmingham's new vanguard cavort along the sonic Richter scale, there's not a spare moment to second-guess their influences or question their intentions. Time is something Peace are short on anyway, their implosion will be spectacular but so is 'Follow Baby'. What was the first single you bought?
I can remember going to WHSmith and buying Elvis vs JXL - 'A Little Less Conversation'. I haven't listened to it for a long time. I think I bought something on cassette before then.

Where did the idea for 'Follow Baby' come from?
It was just stuck in my head from nowhere when I woke up one day like, 'What's that song, wait this isn't a song.'

I recorded a really, really rough demo; I've still got it somewhere. It's the same chords and roughly the same vocals. It sounds really weird but I just woke up and recorded the demo because I was just like, 'Shit! I need to remember this.'

What's the difference between this version of 'Follow Baby' and the original?
When we recorded the album, we recorded all four of us in the room at the same time. When I hear the original version, I hear five different studios and it just seems like a mess to me.

We recorded with whoever would give us some free studio time. We recorded as much as we could and ended up with lots of different versions of parts. It was a nightmare because we had no money and were trying to make a single for free.

How did having Jim Abbiss as a producer affect the new version of the track?
Jim has always made us sound like us sound like us. With production you can completely change your sound into something you're actually not. Jim just said to us, 'You're a band. Why would you want to sound like anyone else?'

You reference 'Live Forever' in the track's chorus. Was that an intentional homage to Oasis or a happy coincidence?
I only realised afterwards and then I didn't really care. That's what usually happens. I was like, 'Do you know what? Whatever.'

You've got to write a song for a popstar. Who's it for and what's it about?
Bieber. He's an angry young boy at the moment and it's about him struggling with himself. Like, 'I am a sweet little boy but also, I am an adolescent and I wanna fuck shit up and fight.' He's got a beast inside, he can feel it in his bones waiting to break out and if he has to smash some lenses along the way he will do. 'Pappanazis'. That's what it's called, 'Papanazis'.

What was the last single you bought?
The last single I bought was Bruno Mars 'Locked Out of Heaven' because we're doing it for the Radio 1 Live Lounge tomorrow. We were going to do Fleetwood Mac but we had to do something that locked in with the target audience and that was the closest thing to the Fleet... So YOLO.

Whereas Morrissey makes a big show of his intelligence by rhyming words like 'stars' and 'reservoirs', Vampire Weekend like to downplay the collective power of their Ivy League brain trust. In the case of 'Diane Young', they've wrapped up a breathless, three minute rockabilly wig out in one of the worst puns you will ever lay eyes on. Even by the standards of The Beatles' 'Lucy In The Sky With Diamonds' and The Fall's 'No Xmas for John Quays', the title of this ode to terminal folly is more cringe-tastic than Adam Sandler's filmography.

Despite Ezra Koenig's best intentions, he still shows his band up as a bunch of towering smartarses by referencing the Kennedy family and a Swedish automobile manufacturer in a song you can only dance to by acting like an utter twerp. Show offs!

Savages vs. the patriarchy pt. III

Savages - She Will (Pop Noire/Matador)

By now you should be familiar with formula behind a Savages song. There will be a surging post-punk guitar riff, there will be a central female protagonist who is not having a great time of life and there will be no happily ever after. This cold, unflinching aesthetic isn't built to last and yet 'She Will' bites harder than any track Jehnny Beth and her band of scathing nihilists have so far thrust into existence.

Every cacophony of clawing noise sounds like the sharpening of knives and every break in the tension has you skewered with an unshakable sense of despair. As the first cut from Savages debut album, Silence Yourself, this bodes well for those who enjoy artifice best when its chorus stalks you on the bus to work and back again.

Owen Brinley used to be the lead singer/guitarist in Grammatics. Now he's the lead singer/synth-player in Department M. How times have changed. 'I'll Fax You An Apology' is the debut single from this new project and it's thoroughly enjoyable, especially the bit where Brinley sings "there's no interim parade" in a whimpering falsetto. You won't find this sort of lyrical dexterity on the new Justin Timberlake album.

Speaking of Ye Olde Trousersnake, Jamie Lidell's video for 'You Naked', is more than a little reminiscent of JT's promo clip for 'Rock Your Body'. That's a tough comparison to invite since this ode to all things sexy contains not a jot of self-indulgent beatboxing. On the plus side, there is a slathering of funkalicious guitar and Mr Lidell throws the kind of disco shapes that were last seen when Jimmy Saville was presenting Top of the Pops. This is what happens when a man who knows writing about 'intercourse' is a faintly ridiculous and decides to push the boat out anyway.

Kurt Vile is not a bloke you'd associate with ruthless business practices. Having spunked the marketing budget for Walkin On A Pretty Haze on a late night TV advertising slot, he was faced with a stark choice: star in the video for 'Never Run Away' himself or source some free labour to do the job instead. Predictably, the lazy toe rag lured his daughter Awlida into the spotlight using the irresistible charms of a dressing up box. Zebra mask or no zebra mask, this kind of behaviour is unacceptable.

There's a fine line between affectionate pastiche and a wholesale rip off. Gabriel Bruce has speed so far over this line that you'll never be able to catch up and warn him that MOR rock hasn't been on trend for 20 years or so. What rescues 'Cars Not Leaving' from utter catastrophe is its undeniable sincerity. When your only real concern is: 'what The Boss would do in this situation?' You can't go too far wrong with the inevitable saxophone solo that follows.

The sound of a Polydor A&R executive being fired, a former hype starlet self-destructing in the most garish fashion imaginable and Angel Haze cackling herself to an early night's sleep. Dreadful.

In Photos: Willy Mason @ The Wardrobe...