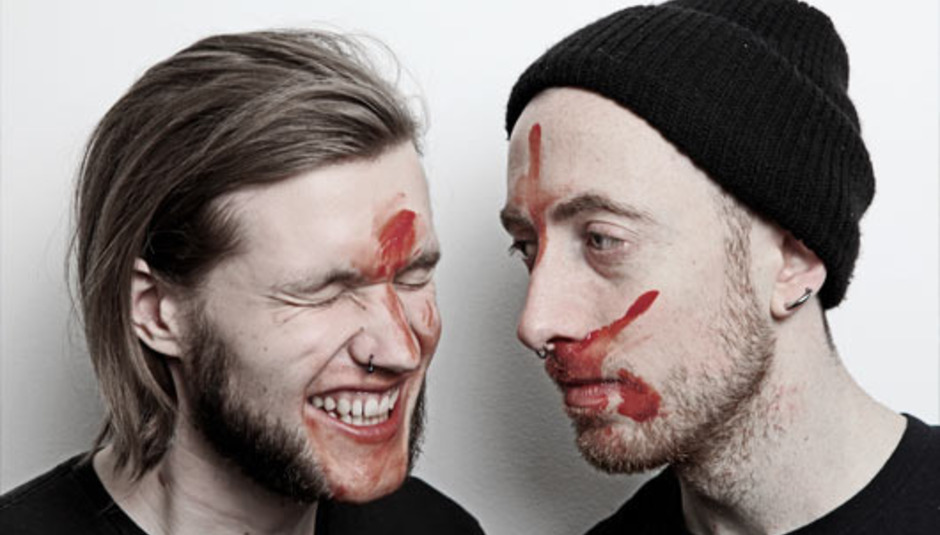 "If we made it big we'd move to LA and buy motorbikes &amp; guns" - DIS meets Wet Nuns

Their singles, ‘Heavens Below’, ‘Why You So Cold’ and the Broken Teeth are all filthy fat riffs and hellish howls, and their shows - more an exorcism than a gig - are as legendary as the tracks, with Gotts and Graham engage in a brawl of riffs, rum and sweat under the foreboding shadow of a gigantic skull and crossbones.

We caught up with drummer Alexis to talk about the band’s story so far, why Sheffield is home, and what it’s like to be dissected half-naked in an ice cold warehouse.

What were your aspirations when you started out as Wet Nuns?

Very little, because Wet Nuns started off as a joke band. Now we take being silly very seriously.

You've probably been asked this a million times before, but why the name Wet Nuns? Whenever I've mentioned your name it's met with equal measures of revulsion and humour.

It's not something we put much thought into. We are masters of making up band names. On a particular day, Wet Nuns was the one that made us laugh the most, and now it's stuck, despite bearing no relevance whatsoever to our sound or influence. Actually, it's a pretty rubbish name, but it does make people take notice....

Last year seemed like a great year for you as you were tipped by everyone from the Guardian to the BBC, you played phenomenal sets at Reading and Leeds and won the Artrocker Video Of The Year award. How was last year for you?

Last year was unbelievable. Neither of us ever dreamed that we'd play Leeds, Reading, Bestival, loads of other festivals... Record Store Day at Rough Trade and do two headline tours. Now it's made us work harder, and we're determined to make 2013 an even busier and sillier year.

You released the Broken Teeth EP in March. How would you describe it? You worked on it with producer Ross Orton [MIA, The Fall]. How has he helped you as a band?

The EP is two old tunes and two new ones. We basically wanted to get some more tunes out there before we finish working on our album (also with Ross). Before the EP, we only had three or four tunes available to people, and somehow did two tours off the back of that. So we've put four of our heaviest and rawest pop numbers out for everyone. Ross Orton recorded and produced it all for us, which is great as he's currently a very busy man. He's a good friend so basically we have a really funny time with him. In fact, we spend more time eating and laughing than working on music. The man's a total legend and he makes us sound as heavy as fuck.

The EP cover art has your name draw inside someone's lip. Who's lip is it? Tattoo or biro?

The lip belongs to my housemate the Rev, Nik Peach. He's also a great friend and has supported me through lots of tough times. He originally offered to get our logo tattooed on his dick, but we settled for inside lip. The poor chap had to have it done twice because the ink didn't settle the first time.

When are you going to start work on an album?

We're almost through with it. We have a couple of vocal parts to do but now we've written more songs, so we'll do another short session and hopefully whack an album out later this year. Assuming neither of us dies or quits or anything.

The videos for your singles ‘Why You So Cold’ and ‘Throttle’ seem to have had a lot of care and attention put into them. ‘Why You So Cold’, for example, involved six months of hardcore embroidery. How important are the videos to you? Do you see the music and the video as one piece of art?

Our first video was by Darren Topliss for 'Heavens Below'. We thought it was so incredible, and then he topped that with the 'Throttle' video. So now each video gets better, we feel it's really important to keep up a high standard of budget entertainment. The music is totally separate, but it's vital for the video to fit with it, and we think (hope) that they've all complemented each other so far....

In the video for ‘Throttle’ you and Rob and being operated on by two cloaked women. Whose idea was it to carve you up? What was it like to shoot?

Darren and I came up with the idea, and it was one of the worst days of mine and Rob's lives. It was filmed in a freezing warehouse in January 2012. The only heating was the make-up artist's hairdryer and every time we had to lay on the floor we thought our hearts would stop, additionally the blood fucking stank.

It's similar to surgical horror films like Excision and American Mary. What inspired it?

There's a series of Japanese gore horror films called 'Guinea Pig'. The director had to prove that no-one was actually hurt because Charlie Sheen saw one and reported it to some kind of authority; obviously he didn't see our video. We'd actually hoped for some publicity from getting banned from YouTube, but no such thing occurred. You can't show tits on YouTube, but you can view actual surgery. What's the world come to?

From your videos, to you name, to your stage show and even your press images you seem to have a fascination with religious iconography. What draws you to this?

Neither of us are religious (actually I'm anti-religion) but we both appreciate the power and beauty of religious art. We're also influenced by heavy music and the imagery that goes with that. In fact, Rob and I will be summoning a demon for his fine art degree show in May, which will be a treat.

You've become somewhat renowned for your live performances. When you play, what do you want to get out of the show?

We just enjoy playing. If there's lots of people there, that's brilliant. If they dance, even better. It's best when there's good interaction from the crowd, when Rob calls people out and feeds them rum from the stage. Actually, he once offered to fight someone in Brighton because of a particularly pedantic heckle. Luckily, the guy saw the funny side as Rob is soft as shite.

Do you ever worry that the reputation of your live show will overshadow your music?

Not at all. If anything, we need to try harder at our live shows. Live music is so different to recorded music. We play our tunes differently on stage, and we sometimes have a little jam too. Recording music is about making use of a studio and doing things we might not be able to at a gig. Playing live is about going hell for leather.

You supported Blood Red Shoes at Norwich Arts Centre and Shepherd's Bush at the start of the year. What was that like?

That was an absolute honour. They're such lovely people, and it was great to play at Shepherd's Bush.

You seem to have a close friendship with the band. How did that come about?

We have mutual friends in Pulled Apart By Horses, but actually Steve [Ansell, Blood Red Shoes] came to see us at our last Brighton gig and took a chance on bringing us with them on their only two UK dates this year. Hopefully, we'll do more with them soon.

You put on your own festival, Detestival. What made you decide to do it?

It's an idea we've always talked about... We basically wanted to put on a load of bands that we really like. We've played with many of them before, and some we just happened to see at other gigs and decided to book them.

What would be your ideal festival?

Probably like the one we're doing, but where we get paid so much that we can buy an island.

The festival took place in your hometown of Sheffield. From the Arctic Monkeys to Pulp to Richard Hawley Sheffield seems to remain a place close to artist's hearts that are from there. Why do you think that is?

Sheffield's just a beautiful place, with beautiful surrounding countryside and very friendly people. Neither of us are from Sheffield, but we are based here and we've always had loads of support. There's also a very healthy music scene here, which means there's lots of very good bands, and lots of crap ones too.

Would you ever move out of Sheffield?

We'll have to see where things take us. I've thought about moving several times, but as yet I haven't found anywhere I'd rather live. However, if we made it big in the US, then obviously we'd move to LA and buy motorbikes and guns.

A lot has been made in the past few months about guitar music being dead and festivals being over – your existence contradicts both things. What do you have to say to the people that are saying guitar music and festivals are over?

It's not over, it's harder and there's less money involved. We struggle so much with money. We both desperately need new instruments, but we simply cannot afford them, which is incredibly depressing. We exist on a knife edge. There are too many young bands who have all their gear and tours paid for by rich parents and record companies. It's boring and unimpressive. It's more exciting to see bands work really hard and get better through struggling.

What are your plans for the rest of the year?

Ultimately, we hope to release an album and secure our financial futures so we can retire by Christmas.