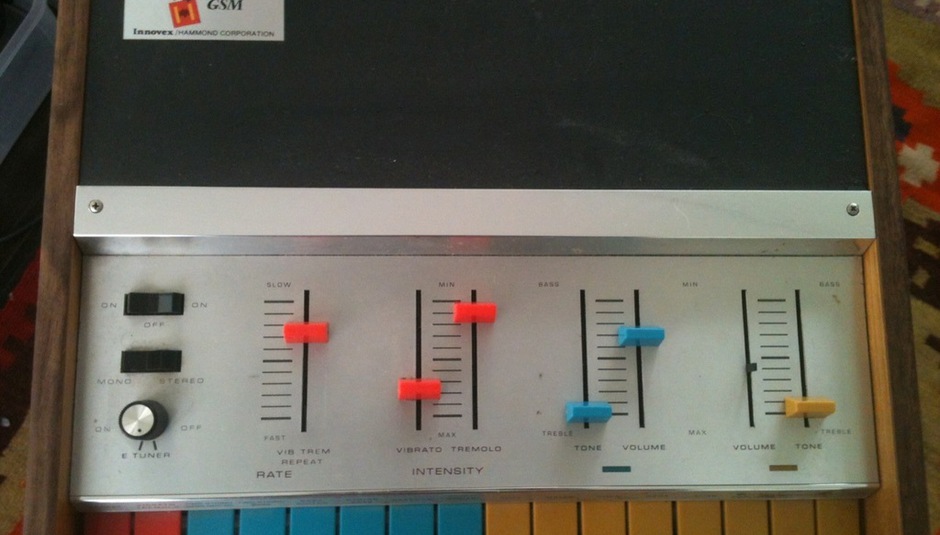 NY/LA genre-hopping duo Javelin return with their third album, Hi Beams, on 15th April 2013, via Luaka Bop - the record label started by David Byrne. Here, Tom Van Buskirk from the band talks about one of the essential ingredients that went into making the album...

"Some years ago my mom (who is an avid instrument collector) unveiled this to me with some relish. She didn't quite know what it was, but she had a feeling I would be pretty into it. "The Condor" was the first mass marketed guitar synth, made in 1969 by the Hammond corporation and some mysterious subdivision known as Innovex.

1969 says about all you need to know about the sounds that come out of this thing. Each guitar string has its own pick-up and thus can be treated separately once it enters the organ-like circuitry of the main brain. Each yellow tab represents a particular "instrument" which as far as I can tell is achieved by running the guitar signal through extreme musical EQ and distortion. I am really not sure if it is also triggering The Condor's own organic circuitry, or if it merely sculpts the guitar sound. Each blue tab represents other instruments one octave down. My favorite sound in the lower register is "bassoon" -- favorite upper register is a tie between "fuzz" or "harpsichord." You can combine instruments by having multiple tabs down.

It also has a setting where the bottom two strings are pitched down to a nice bass guitar tone. Or choose Bass + guitar and get these perfect bass guitar and regular register guitar couplings for perfectly simultaneous lines. Also you get a vibrato and tremolo, and a repeater, which is the most organ-like thing about the thing. I once had a Kraftwerk cover band that only played one show and played 'Neon Lights' using the repeater.

Most people I've talked to who know this thing say the sound is way too harsh and annoying for any regular use. Perhaps it says something about me that I try to make it work on almost any recording that needs guitar… I know nothing about getting good guitar sound so I just limit myself to what I can get out of the condor (and a few pedals / amps). One of the best sounds it can do is the classic electric 12-string sound of The Byrds or the opening octave guitar in 'Be My Baby'.

We've used it on a dozen songs on our last two albums. It is temperamental and there have been times when I thought it was completely broken. It came with a nice Italian hollow body guitar that looks like the Ventures played on the Ed Sullivan show. I love The Condor and will probably never be able to part with it. This thing goes in my grave." From Seattle to SXSW: Frightened Rabb...