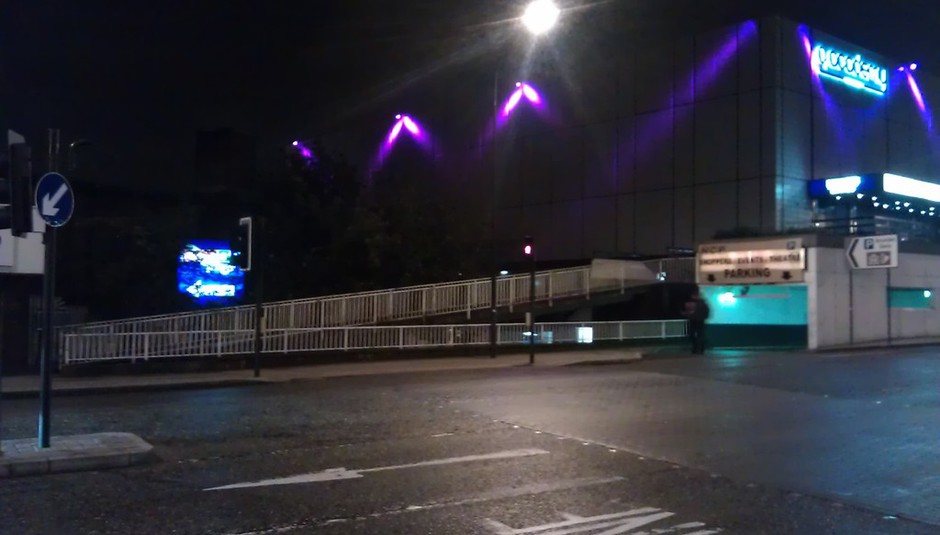 When it comes to writing this column, we spend an awful lot of time researching on the internet. Facebook, Twitter, Soundcloud and Bandcamp – that’s how we find all the bands we feature here. It's also where we learned the sad news recently that several of those bands – Standard Fare, Likes Lions and Les Oeuf Pourri – have called it a day. It’s where we found this surprising video of Lewis from Best Friends being dead good at skateboarding. It’s where we saw whoever runs the Tye Die Tapes Twitter account be a bit rude about another band, and a member of said band not take it that well. It’s where Tye Die Tapes have, hilariously, turned the accusation that they’re hipsters into a very funny bit of DIY branding. And it’s where Offbeat was resurrected.

For 13 years, Offbeat was the night that every indie kid in Sheffield looked forward to on sporadic Fridays during term-time, where they’d hear all their favourite C86, post-punk and leftfield pop songs and shuffle awkwardly around a dancefloor in time with them. In June 2011, Offbeat became OffBOAT for the night, but for reasons that were never made clear no more dates were booked when the students’ union it called home reopened in September. This eventually led to a post in the Offbeat Facebook group in which one of the old regulars asked for the night to return. Chris, who runs Offbeat, said he’d do it if the post got 150 ‘likes’. Within a few hours, it had 208, and true to his word Chris is planning a night for some time after Easter. What we’re saying, in short, is that as well as finding new music, the internet is great for three things: 1) Mobilising a community behind an important cause such as bringing back your favourite club night, 2) Band beefs, and 3) Hilarious videos such as this one of Sheffield’s Temple Of Coke doing All Saints' ‘Pure Shores’ on Cleethorpes beach.

At the risk of sounding like that guy, we’ve been going on about Drenge for aaaaages (see). It turns out someone was listening because in the past few weeks they’ve had their new single ‘Bloodsports’ named Hottest Record In The World by Zane Lowe (Hi Zane, thanks for reading!) and had full pages with their faces on them in The Fly and the NME. That song, ‘Bloodsports’, marks the point at which Drenge stop looking like Wet Nuns’ little brothers and become just about the most exciting rock duo in Britain. It’s class, and just when you think it couldn’t get any more class, at 1m58s it gets even classer. It’s out on iTunes now and you can see Drenge live at the Queens Social Club on February 23rd. In the meantime, have a look at their new video which was filmed at Owlerton dog track and stars, fittingly, the boyos from Blood Sport.

Now, album news. Screaming Maldini have made one, it’s called Screaming Maldini and it’s just about the most uplifting thing you’ll ever hear coming from this grey ol’ city of ours. We’ve been big fans of the band's last couple of singles – ‘Summer, Somewhere’ and ‘Life In Glorious Stereo – thanks to their ambitious instrumentation, ludicrous levels of catchiness and their ability to be a little bit twee without making us want to vomit out our own pancreas. You can hear the album on Bandcamp and Screaming Maldini will finish their current UK tour with a show at The Harley on March 2nd. Their new video, for album opener ‘The Awakening’, is bloody lovely too, by the way.

Also with an album on the way are Dead Sons, whose The Holler & The Hmyns will basically be the opposite of Screaming Maldini’s record – dark, angry and very loud. If you follow the band on Twitter this won’t be news to you, as they seem to re-Tweet LITERALLY. EVERY. DAMN. PIECE. OF. PRAISE. that comes their way. But despite their rather aggressive PR strategy, we have to say we like where Dead Sons are going with this album preview track, ‘Ghost Train’. Their album launch show at the Library Theatre on February 16th is sold out, but the record’s out two days later.

Moving back down the scale of musical format durations, Low Duo have a mini album coming out on March 31st which will stick within the band’s strict parameters – one guitar, one voice and stacks of intense emotion. A single from the almost-LP, ‘Born Into A Spider'/'Winter’, is available to download now and has a rather sinister video to go with it.

All of which leads us nicely to this month’s EPs. Nutty blues-punk duo Wet Nuns have one called Broken Teeth coming out on February 18th but we have to say we’re rather taken with this little gem from off-kilter emo two-piece Pjaro. Why Is No One Here was recorded at Tye Die Tapes HQ and was released in mid-January. Hear it on Bandcamp .

As every discerning gig-goer knows, February is always a silly-busy month for shows, and there’s loads of great ones coming up at all the usual places. But one thing we’re particularly looking forward to comes in March, when the aforementioned Wet Nuns take over the Queens Social Club for their own festival, Detestival. As well as themselves, they’ve managed to book tons of great bands to play March 30th-31st including Wolf People, Hawk Eyes, Toy, Bo Ningen, Hookworms, Temples and Blood Sport. Earplugs advised.

May 6th – Malcolm Middleton – The Harley

Keep an eye out

Increasingly living up to their huge potential, smoky shoegazers Blessa have a new track for you to stream on Soundcloud. For us, ‘Unfurl’, is the best thing they’ve done yet – gorgeously atmospheric with a genuinely gripping hook. We only wish they’d get round to putting out a proper release so that we didn’t have to keep sneaking their demos down at the bottom of this column. You can see them live with Veronica Falls and Fear Of Men at The Harley on February 25th and with Fiction at Bungalows And Bears on March 28th.

Pet Rock seem to share a similar infatuation with My Bloody Valentine, but render it in a completely different way. They’ve got a shitload of new songs up on Soundcloud which build on Dinosaur Jr’s fuzziness with interesting electronics and some genuinely very clever production. See them at The Washington on Thursday, if you like.

Also with a few gigs lined up locally are Radical Boy, who ask us to imagine “a lo-fi punk nirvana meets pavement, meets a strong throaty shouting vocal over a thrashy drums and distorted guitar”, which we like. Apparently they’re only 17, which is insane given how great they are and the fact that they put out their second EP of sneering slapdash college rock, Smut, back in October. You can hear that over on Bandcamp and see them at Tye Die Tapes HQ or at DAda in the coming weeks.

They’re joined on that bill at DAda by Brazinskas, who play really sludgy proto-punk that sounds like it was recorded in Iggy Pop’s shed. Here’s a funny video for a great song of theirs called ‘Legz’.

What have I missed? Email me at rob_cooke1@hotmail.com or find me on Tumblr and Twitter.