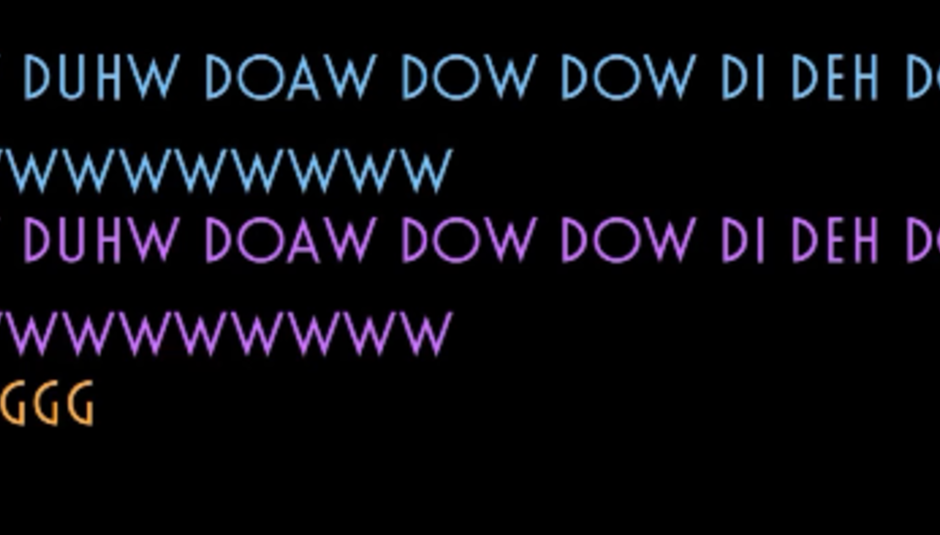 I don't just love Randan Discotheque's Craig Coulthard for his Forest Pitch project, nor do I only love his band Randan Discotheque for their (perfect) concept single 'Daily Record May 18th 1993'. And I don't just love 'Grandad's Coffin' for its lyric video, in which every single drum noise has been spelled out with perfect phonetics. No, I love it for its verve and concision, its neat-as-a-ping, bright-as-a-button construction. And for how, in making a song about calamity at a funeral, it highlights just how absurd the end of our lives can be.

The wonderful video for 'Flexxin'' has Duncan Wallis flinging himself about. And it's the best kind of dancing, because Wallis is paying no heed to the bum-in-air, all-fours poses so beloved of popular music. I mean, as anyone who has ever had a happy time with no clothes on will know, there is more to sex appeal than doing non-U yoga poses or merrily waggling your rump - the key to it all is abandon; people who do not care for the approval of the crowd, are nearly always the most attractive. Better still, 'Flexxin'' is the kind of joyful noise that makes you want to ape him.

'Atomium' had me at 'world's fair' - the 'Atomium' being the enormous model of an iron crystal which was built as part of the Brussels World Fair in 1958. And it's odd, because I was in a junk shop only yesterday looking at Viewmaster slides of that precise event; wondering why I wanted them, and then remembering that every world fair was about hope, modernity and human endeavour. And this, of course, is what 'Atomium' (the single) reminds me of - with its ominous, onward-march, synth runs and its air of the batcave.

If you want, you can listen to 'Repetition' as a nursery rhyme about adulthood, and all the mindless, endless trudge it entails; with its paying of bills and its getting on the bus and its not stabbing people who abuse the CC field. It helps that Raisa sounds a little bit arch, with a delivery not dissimilar to Girls At Our Best's Jo Evans or - at a real, but in-a-good-way, push - Shampoo. Such stroppiness becomes a song on which telephones sound like alarm bells, so you are put in mind of time as the oppressor - on it marches, as Raisa asks 'Why've you not done that?' and 'Why've you not done this?'. It should be annoying to be asked - in the form of a pop song - to account for yourself. But you get the feeling that 'Repetition' is having its cake and eating it, in order to make you realise just how odd our ideas about achievement can be.

The first twenty seconds of Spectral Park's 'Ornaments' is brilliant, because it sounds like a broken-down, wind-up toy and/or a sample of the Magic Roundabout theme tune at dizzying speed. Then it becomes dreamily-ethereal, screechily-hazy, driftily-gazey celestial rock of the sort that provokes non-specific feelings of not very much. False hopes, dashed dreams, man!

This is what all the cool people are listening to and if you do not like it or get it everyone will think you are well daggy and you will die alone and not even your friends will see the flicker of your prior form in their heads, not even enough to go 'Where's whatshisname, um, John...was that his name?' and also AS WELL RIGHT no one will come to your funeral, bloo hoo.