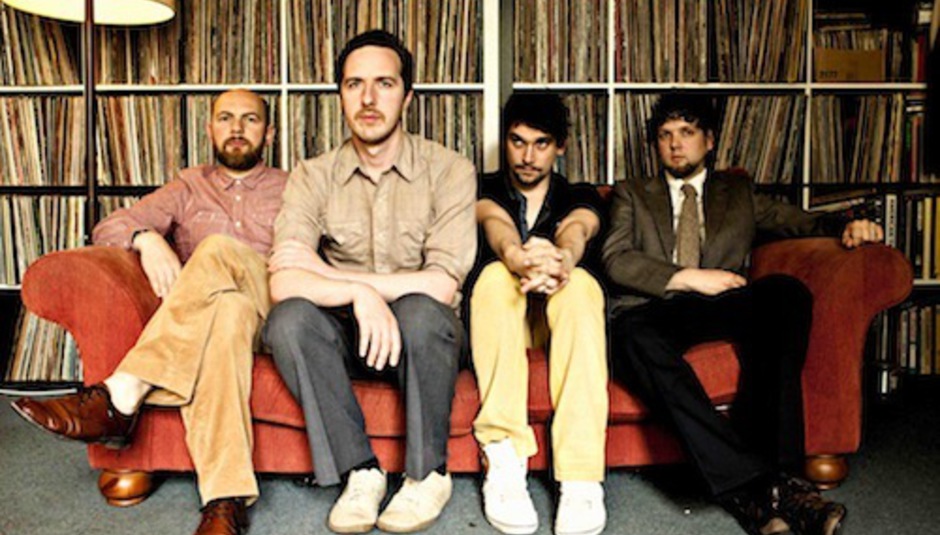 It’s been 3 years since the release of their debut album Wave If You’re Really There. "We’ve been very productive in that time”, says Carl Brown of Wave Machines. Three babies, two weddings and an engagement are just some of the ‘extra curricular’ activities that have occupied the band since then.

Their followup, Pollen, took shape in the eaves of St Brides Church in the shadow of Liverpool’s Anglican Cathedral. Tim and the band worked through initial ideas in this self-made rehearsal space, then, with a hard drive full of tracks, Tim would take trips to a studio in London, where their efforts were laid bare before producer Lexxx (Arcade Fire, Bjork, Goldfrapp). The pair would then chop and change, approve or discard, edit or overdub, before Tim set off back to Liverpool.

Here, Tim Bruzon and Lexxx (co-Producer) talk us through the making of the new album....

Tim: This tune was our reference point for the album while we were making it. We liked the moodiness, it wasn't too frivolous, the groove was a bit off key and uneven. It represented the progression we wanted to make from the previous record.

Lex: The structure of the song was very much complete when we started work on this - in fact the arrangement changed very little, it was probably the most fully formed arrangement on the record at demo stage. Many of the rhythmical elements were transferred to cassette or tape, to create a thicker tone and add some subtle changes to the groove. I remember wanting the overall mood of the track to feel darker, and once we added the sub bass with the Wasp it seemed to tie all the other elements together, underpinning both the high doubled bass and the rhythm in exactly the right way.

Tim: I had this idea about your dark side wrestling with itself ('to make your shadow fight your silhouette') as it might in the moments right before you decide whether or not to do something wrong. I ran with it and completed the verses quite quickly but got stuck on the chorus. It was chopped and changed over the course of about a year. The "Ill Fit" idea didn't land until just a few weeks before we mixed the song but now it seems completely at home with the rest of it.

Lex: This track more than any other went through a lot of versions before the we finally found the right direction. The track ended up being a sample of one of the earlier versions and was re-arranged around this. I remember when I mixed it wanting the whole thing to feel a bit like a broken sampler, almost like parts of the track were stumbling over each other - trying to feature all the really abrupt changes in the rhythm and the strange sample edits.

Tim: We had a lot of big, longer songs on the table towards the end of the process and we realised we needed something snappier, something a little more instant. The chorus lyrics and melody had been part of another demo so I pulled them out and wrote a new groove and verses. Sometimes a song's not ready to be finished until it says so.

Lex: This was probably the most fun track to work on - I remember tying the Jupiter up to my Max Msp sequencer and having an hour long synth jam - unfortunately the synth solo never made the final version but a lot of the other synth bits remained. I wanted the beat and bassline to feel really dirty and unrefined - I think we spent a lot of time re-amping and transferring a lot of those elements to tape.

Tim: I had been following the phone hacking scandal with great interest and couldn't believe how thick and fast the revelations were coming. I really didn't want to write about something that was so obviously there on the front page, it seemed too obvious but it just kept coming back again and again, day after day till I couldn't ignore it. In the end it's not explicitly about Rupert Murdoch et al, but is about power and the complicated process of trying to control it. The good folks at News International simply helped me focus the ideas.

Lex: Getting the rhythm section right was definitely the most challenging aspect of putting this track together. The original demo had a programmed beat, and we just couldn't get the groove to sit right, it's an awkward pattern, but it really propelled the track along. We tracked live drums, and as soon as they had some looseness to them it started working well. I remember in the mix wanting the vocals to feel almost lost in the chaos, like the rhythm was just incessant and overbearing almost, with all the other elements swirling around them.

Lex: I remember trying every trick in the book trying not to make the second verse sound like the Rocky theme tune...

Tim: I wrote this after watching Duncan Jones' film Moon. Occasionally the mood of a film stays right with you well after the event and this was one of those times. I loved the idea of total isolation, total loss and that somehow, even then, you can have one final shot at redemption.

Tim: I was moved by the tragic loss of 21 migrant cockle pickers in 2004 on Morecambe bay. Whenever I take walks along the long flat sands at low tide here in the North West of England I'm reminded of those people. I don't know why that particular story has stuck with me for so many years, perhaps because it felt so incongruous, more like a headline from a crueler, Victorian England.

Lex: We used the very first demo guitar on this track - Tim tried re-tracking it a few times but we always went back to the demo. It always felt better than anything else we could come up with. I suggested recording harmonium on it which I think replaced a synth part - all the creaks and inconsistencies of that instrument seemed to lend itself to the mood. It used to be owned be George Harrison, it's the best sounding harmonium I've ever recorded. All the brass parts had really wide tuning but it really helped the feel of the ending in particular - I don't think it would have worked so well if those parts had been played precisely.

Tim: Sometimes it feels like a battle to live in the moment and not worry about the things we are supposed to worry about. I have to remind myself that the media is like a big hungry baby that feeds on misery and paranoia, throwing scraps around without a care. It picks you up each morning, chews you up and drops you back in front of your computer before you even realise what's happened.

Lex: This originally had live drums on it. I remember Tim recording a new version with his drum machine and ditching the live drums and suddenly the track came to life - it didn't feel like part of the record before that. I remember a lot of the sections feeling a bit disjointed and Tim and I working hard on making those transitions feel as musical as possible.

8. Walk Before I Run

Lex: I always had a feeling that this track could easily feel overblown if we treated it the wrong way - I think Tim may have re-tracked the vocals a few times to get the dynamic development of the vocal performance to feel right.

Tim: I wanted to write a sort yearning, love song, something a bit more traditional in form and subject matter. Setting a goal and some self-imposed restrictions stops me running off in too many directions The chorus line "I never learned to walk before I run" seemed, for a long time, far too obvious and clichéd to be useable. Eventually I came to the conclusion that sometimes a bit of plain speaking is just what's needed.

Tim: This is about a friend getting messed around by a girl like a mouse being pawed by a kitten. I have always thought that this song won't be for everyone but I really like the oddness it brings to the album.

Lex: This always felt like a moment of chaos for the record - when I mixed it I wanted all the parts to feel like they were fighting with each other, with the verses feeling like a brief pause for breath. The middle 8 and ending was even more of a development of this - like the whole song was was collapsing and folding in on itself.

10. Sitting In A Chair, Blinking

Tim: the band had recorded an entirely different set of parts for this one at an earlier session. When we sat down to work on it Lex made the difficult decision to scrap everything but the vocal. The song is really just about one of those moments when you drift unconsciously into a daydream and start musing on where you're up to, what you're doing, what could be better and what's just right.

Lex: I think we just worked this out from the demo acapella up. The rhythm was almost entirely the MS20 again triggered by the Max sequencer. Most of the synth sounds are actually reprocessed vocals from the acapella. I remember both of us really trying hard not to add anything to the track that would remove the space it had, every element that made it through had to be an essential part of the track.