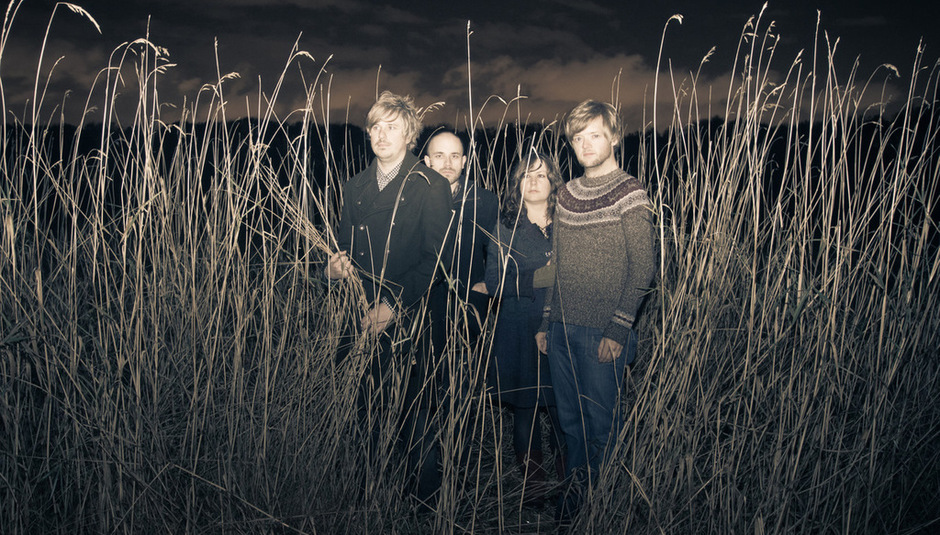 As another year rises over the skyline of Manchester’s oddly juxtaposed city centre, it’s a new dawn and a new day for Drowned in Manchester also. After doing some sterling work over the past few years, it’s with sorrow that we bid farewell to Simon Catling who is heading off to other exciting ventures. I’m sure that everyone here will miss him and a great deal of thanks is due from the streets of the city towards him: having been instrumental in supporting and giving nationwide coverage to some of Manchester’s newer bands. We really do wish him all the best.

But as one of Manchester’s most famous musical sons once said: “There is a light and it never goes out”. And indeed, the pleasure and the privilege is all mine to be taking over this column from Simon and hopefully continuing to bring you some of the newest and most exciting bands from the basements and backstreets of England’s rainiest and strangest musical city. The great pleasure of living and following the music scene in Manchester over the last few years has been to see the city shake off the tag of the ladbands and the beerboys to fully embrace the progressive nature of modern electronica, while continuing to fashion thrillingly out-of-step guitar bands. With new independent venues and promoters setting up all the time and the dreaded pay-to-play largely eradicated from the city, it’s arguably never been a better time to be in a band in Manchester. Sadly however, the end of 2012 saw the final demise of Manchester Music Online – Manchester’s longest running and most respected online music publication. From their remarkable attendance at 250+ gigs per year each, to hounding out money-grabbing promoters attempting to milk naïve bands through the city’s heritage, to just generally being fundamentally good eggs and genuine music fans, the whole city (whether they’re aware of it or not) owe a massive debt to Cath Aubergine and Jon Ashley. Genuine heroes of the local scene and beyond.

So in their spirit, here are nine current underground Manchester bands and acts, of which you may not yet be aware of but certainly should be! Over the next year or two I’ll be attempting to give a shout out to as many bands as possible, so if you want me to listen to your music then please send me a digital file or a Soundcloud link to drownedinmanchester@gmail.com and I’ll try to get through as many as possible. Anything or any style considered – like Manchester as a city, anything goes around here. And if it’s weird, that’s even better reason to send it on to me. No prejudice :-)

Ok, I admit that I’ve pushed Air Cav before on this site (notably here and here) but there’s a perfectly valid reason for that. That reason being that make the most beautiful melodic post-rock songs; never forcing their sound or compromising on anger or integrity – simply knowing how to piece their multiple talents together into a gorgeous cacophony of song and magic. They’re currently working hard on their second album (and from their recent gig at Soup Kitchen in October, the new songs sound absolutely jawdropping) but you can still get their 2011 debut Don’t Look Indoors from their website, along with a stack of free remixes. One of Manchester’s treasures, we all hope 2013 will be their year.

It’s nearly three years now since I first stumbled across Christopher Eatough playing to a hushed and enraptured room at Islington Mill and yet his gorgeous acoustic songs still echo with tremendous and humbling poignancy. What sets Christopher aside from the typical wave of acoustic singer-songwriter artists is his ability to play around the margins of songs for ages, gradually painting the tapestry of wonderful, evocative characters and scenarios before tying it up in perfect little bundles that leave you entranced. He’s not one for grandiose gestures or overblown hyperbole, his skill is found in his restraint and subtlety. Looking to follow up on 2011’s debut A Creak in the Cold this year, he’s prominent proof that the heritage of traditional songwriting remains alive and well within the borders of the M60.

Slightly pushing my brief on this one (they’re actually from Winsford in Cheshire) but last time I looked, DiS didn’t have a ‘Drowned in Cheshire’ column so I’m adopting them. And with good cause – Deadbeat Echoes are a perfect retort to the tired and clichéd “there aren’t any new guitar bands…sob sob sob” that we continue to hear so many times. Combining a punk energy to a C86 jangle and melodic charm, shot through with an Alex Turner acerbic wit layered upon Pete ‘n’ Carl’s twisted traditional tales, Deadbeat Echoes have a remarkable ability to shuttle from musical base to base, always seeming completely confident in what they do. With support slots to The Charlatans, A Place to Bury Strangers and Twisted Wheel already getting praise, they’re perfectly placed for a great year to come. Basically, they’re like Palma Violets but with far better musicians, far better ideas and far better songs. So that all being said, my hope is that they’ll be massive by the end of 2013. It’s entirely possible. And maybe even likely.

From the Kites of San Quentin

Of most remark amongst the burgeoning musical scenes in Manchester over the past few years has been the development of progressive, weirdly cut and hauntingly beautiful electronica outfits, of which FTKOSQ are one of the most beautifully realised. Combining hypnotic waves of synthesiser, burbling and unsettling samples and Flying Lotus-esque beats together, what eventually arises out of the pot is something disarmingly coherent and melodic, considering the makeup of its disparate elements. 2011’s Mitochondria EP, available on a “Pay What You Want” deal through their website is a synapse-jumbling delight to behold. And they’ve promised us an album in 2013. If you want an idea of what Manchester has been doing while laughing at those people still thinking we’re only obsessed with Joy Division and The Smiths, this is where you start looking.

Incidentally, we are obsessed with Joy Division and The Smiths. But man cannot live by doom alone. Head-fucking bleeps and beats also help!

Ludicrously talented, full of continually inventive and room-brightening ideas and overwhelmed with sheer exuberant energy, Shinies are every bit as enrapturing as their name suggests. First discovered last year knocking several bells out of Manchester’s Ritz as support to WU LYF, the band have continued to impress up and down the country, including a thunderously received set at The Great Escape and sold-out gigs around the UK. But all of this was surpassed by the release of their second single ‘Ennui’ in October, the video for which featured Pat Sharp (you all remember Funhouse, don’t lie) being beaten with baseball bats and then set on fire. Quite brilliantly, they managed to enrage The Sun and The Daily Mail (never a bad thing) who then posted outraged news stories condemning the band for their “irresponsible” actions. So, a good dose of free publicity thanks to the feckless conservative media, but none of this should detract from their uncanny ability to write memorable and distinctive guitar-pop anthems that are begging for a wider audience. Starting with a date supporting The History of Apple Pie at Manchester’s Soup Kitchen on 4th February, they’ve got every chance to do just that. Now, has anyone seen Phillip Schofield around here anywhere???

Formerly The Louche FC, and now thankfully without their bothersome affix, The Louche are masters at dragging the ghosts of Slowdive, The Jesus and Mary Chain, Asobi Seksu and The Breeders together into the light and fusing them with a punk snarl and a penchant for the show-stopping that makes them a truly unique outfit, especially in the live setting. Their unique ability is to blend the dark and the light expertly into one package, with lead singer Kyoko’s vocals slicing sweetly through the chaos and the clamour. But they also have a real understanding of dynamics and structure too, and often teasingly and brilliantly hold back when you expect them to go for the jugular and the quick release. Last year’s single ‘Salt’ was a perfect taster of their abilities and with the band back in the studio recording new material, we’ve all got eyes on stalks waiting for the next instalment of what continues to be an intoxicating musical development.

There’s a definite pop suss to The Narrows glorious and moody electronica/guitar hybrid creations. But this simply seeks to elevate their creations beyond simply experimentation and onto a plane where they begin to subvert melodicism into something deeper, darker and more profound. Trying to find a firm touchstone isn’t easy – In Rainbows era Radiohead are an obvious starting point but The Narrows are far more complicated than that. There’s the odd hint of Richard D. James in there, touches of Berlin-period Bowie and an ever-present gloom and mechanical whir that raises up the spectre of Factory Records. But the truth is that ultimately, The Narrows do their own thing. And like any talented band with the self-confidence and intelligence to play around the fringes while flirting with the mainstream, their creations take on a wonderfully unique shape and form.

Label mates with Air Cav, Mount Fabric excel in drawing together gorgeous falsetto melodies, razor edge guitars and tumbling drums into pieces that sound like the end of the world and the most gorgeous thing you’ve heard – all in one short piece. The comparisons to Wild Beasts and Radiohead have been made but they’ve actually got more in common with Foals continuing and impressive progression through the gears, while their ability to switch structures within a song leaves you hanging on for the next realisation and transformation. They’re also not averse to absolutely freaking out when necessary, which is something that all bands – however beautiful – should find the time to do every now and then.

What’s so irrepressibly brilliant about Santiago Street Machine is that they never seem entirely certain whether they’re a live dance act, a dark-flecked pop remix outfit, a lumbering baggy-rave beast or a shit-hot groove outfit. And they’re brilliant at being all of them at once. Powered along by Chris Corrigan’s astonishing drum patterns and Ben Gooch’s pinpoint bass lines, the solid groove allows Andy Chandler to indulge in his pop-tinged melodies and electronica flourishes. Their gigs tend to result in mass pandemonium, which can only be a good thing in determining their future potential. Currently reworking and re-recording some of their early singles to a more precise and polished sheen, they’re likely to be building upon their significant radio exposure (XFM, Radio Manchester and Radio 1) into 2013 and putting together their debut album, which should sit neatly between Radio 1’s house-pop fans and the intelligent electronica of Delphic and Everything Everything. Of all the bands within Manchester, I’d have a sneaky tenner on Santiago Street Machine being the one who break through into the mainstream this year. Remember where you heard ‘em first…