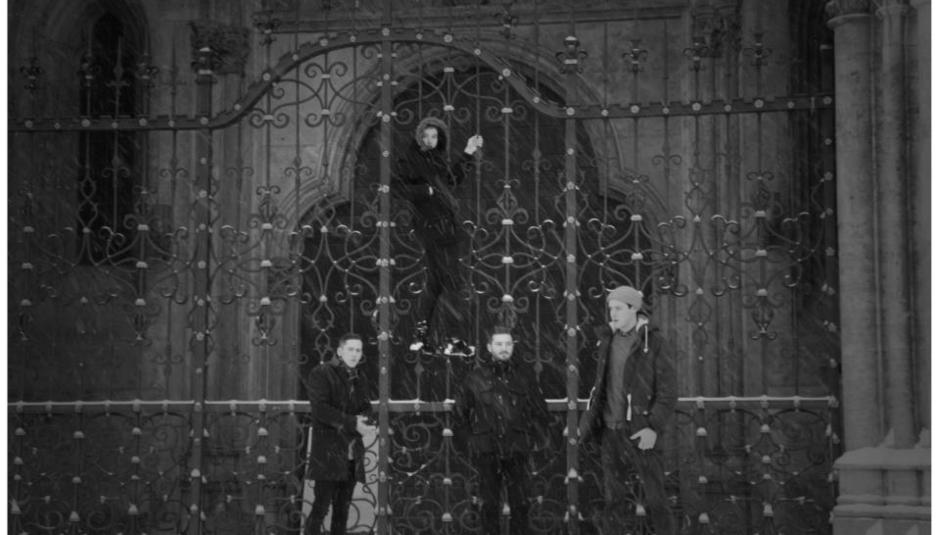 This time last year, Glasgow's Holy Esque were relatively unknown outside of their native city. Even now, with little over thirty shows under their belt, they're still at that infant stage as a band. However, thanks to a couple of high profile support slots with Wu Lyf and more recently a European tour opening for The Raveonettes, along with April's well received eponymous debut EP, which scored an impressive 8/10 here on Drowned In Sound, they've emerged as one of 2013's brightest hopefuls.

Having only been together for the best part of two years, the modest four-piece - Pat Hynes (vocals/guitar), Hugo McGinley (guitar), Keir Reid (keyboards) and Ralph McClure (drums) - understandably seem quite surprised by the attention bestowed upon them. Hynes' gravelly vocal delivery drawing comparisons with the likes of James Dean Bradfield and Rod Stewart over a musical backdrop fusing the brooding intensity of The Twilight Sad with the poignant bluster of The Chameleons or Boy-era U2, they're a healthy respite from the Top Shop indie churned out by numerous Two Door Bicycle Club & Sons clones.

Later this evening they'll play as though their lives depend on it to a full house of mostly open-mouthed punters at Sheffield's Queens Social Club. Beforehand, DiS caught up with the quiet and unassuming four-piece post-soundcheck.

DiS: When did Holy Esque first get together and what was your motivation for starting the band?

Ralph: Me and Keir went to art school in Glasgow and Hugh worked with Pat, and we all met each other and eventually decided to form a band.

DiS: Are you all from Glasgow originally?

Pat: Yeah, we all grew up around the city.

DiS: Is this the first band you've played in?

DiS: Are you surprised at the attention you've received at such an early stage?

Pat: Definitely. We never really expected anything. We were quite amazed at the reviews the EP got. It was very early days for the band so we didn't expect anyone to even hear it let alone like it!

DiS: The band's sound touches on a lot of different reference points from eighties alternative bands like Spear Of Destiny to classic rock in the vein of U2 and also early nineties shoegaze. Were any of these major influences?

Pat: We didn't really think too much about our sound to be honest. Every band probably says this in interviews but it really was quite natural.
Ralph: We don't deliberately try and sound like anything else.

DiS: Some of the comparisons in reviews have been quite interesting though. From Rod Stewart to the Manic Street Preachers and Glasvegas for instance.

Ralph: I don't think a lot of those comparisons are really justified. I think sometimes people attach a label to something just so they can pigeonhole it and I don't think that's always fair. I mean, we're not trying to run away from comparisons; they're all actually quite complimentary, but sometimes you'd rather people just appreciated us for who we are. It's difficult for us being constantly compared to other artists when all we want to do is try and create something new.

DiS: There seems to be quite a vibrant music scene in Glasgow. Do you see yourselves as key players in that scene and do you have an affinity with any of the other bands up there?

Pat: Not really, no.
Keir: There's a clique of bands in Glasgow. Certain bands anyway, and we really don't want to become a part of that.
Pat: Because once you're in a clique then you're always in that clique and the difficult part is coming out of it.

DiS: Do you think it's hindered some bands from Glasgow in the past?

Pat: Definitely. Once you got involved to that extent you can't help but become stereotyped.
Keir: Sometimes it's their own fault though. Most of the time I guess.
Pat: If you spend all your time hanging around with people in those bands and your band ends up sounding the same. It can't be good for anyone really.

DiS: Do you see yourselves eventually relocating away from Glasgow?

Ralph: I don't know whether we'd relocate. It makes sense for us to be based there because this is where we grew up, where our families and friends are and we do have a lot of people come to our shows in the city.

DiS: Going back to the first EP, for which Drowned In Sound awarded an 8/10 in April, what made you choose the four songs that ended up on the record? Each one could quite easily have been the lead track or even a single in its own right.

Pat: Basically they were the first four songs we ever wrote together. We didn't have anything else that we felt was good enough to release at the time. It's really nice when people say things like that but that's the honest truth.
Ralph: I think you may as well put out your best tracks as soon as they're ready. We don't well to sell ourselves or the people that buy our records short.

DiS: Having released four songs of such a high standard on your first EP, do you feel there's a high level of expectation for everything that follows?

Pat: I don't know, I mean we wouldn't even know that. From our point of view it's just a collection of songs from the first time we wrote together. They were the only tracks we had to work with at that time. I think we've got much better songs than that now to be honest.
Keir: We've developed way beyond where we were back then. The songs we're writing now sound much bigger for a start.

DiS: How many songs do you have in total at this moment in time?

DiS: When are you hoping to put out an album?

Pat: It's difficult to say. It's definitely going to happen.
Ralph: We just need to find the right label to help us put it out.

DiS: There's been a lot of interest in you from various record labels. How close are you to signing a deal to release the album?

Pat: There are always options out there, but at the same time there's nothing really concrete that's been offered our way either.
Ralph: There are a couple of people that we're talking to at the minute but we can't really say too much in case we jinx it!
Pat: If we could put out an album in 2013 that would be amazing.

DiS: What would you be looking for from a label in order to sign with them?

Ralph: There are so many different things to consider.
Pat: Every one has its pros and cons, whether they're a major, indie or even self-release. We put out the first EP by ourselves and didn't do too badly with that so wouldn't rule that out again for the time being either.
Ralph: Obviously we wouldn't sign with a label that tried to stop us from doing our own thing.
Pat: They'd need to understand what we're about as a band, and not try to alter our aesthetic either.

DiS: Kevin Burleigh (Glasvegas, Simple Minds) produced the EP. How did you end up working with him?

Pat: He came to see us at one of our earliest shows...
Keir: ...I think it was only our second or third gig...
Pat: ...and just loved it. He asked us if we wanted to make some recordings with him so we did which are all on the EP. He was a joy to work with.
Ralph: He really got what we're about and captured our sound perfectly.

DiS: Do you see the band working with him again in the future?

Pat: I don't know. I mean, he's a good friend now. I'd like to work with him and I think he likes working with us, so hopefully.

DiS: A lot of people may have seen Holy Esque for the first time supporting Wu Lyf at the tail end of 2011. Were you influenced by their "business model" as it were, and if so, is it something you'd consider applying to your own band, albeit with the intention of a more successful outcome?

Pat: No.
Ralph: You can be inspired by something but it doesn't mean automatically following the same route.
Pat: What they did was cool up to a certain stage but everyone was over it very quickly, and once that happens people tend to lose interest.
Ralph: People need something to hold on to. The music is important; of course it is but sometimes people want more than that. They want to see what you're all about. It's OK to start off like that but once the point's been proved where do you go next?
Pat: It's pointless to just stay in the dark forever.

DiS: But there can be a downside to that too. So many bands nowadays seem to put more effort into social media networking than writing songs for example.

Pat: Yeah that's true. Some bands spend more time on Facebook than in the studio or playing live. You know, going out of their way to increase the number of likes when in reality Facebook 'likes' don't sell records. It's not transferable to anything. Having a presence on various social media sites can be helpful to some extent but it's not the be all and end all of being in a band.

DiS: You've recently toured with The Raveonettes. How did that come about?

Pat: Sune Rose Wagner from The Raveonettes heard our EP and asked us if we'd like to go on tour with them.
Ralph: It all came together really nicely. Their booking agent heard the EP, really liked it and passed it onto Sune and fortunately he was impressed enough to invite us on the road.

DiS: You've yet to embark on a headline tour of the UK.

Ralph: That's something we'd like to happen. We prefer playing live and would love to have the opportunity of touring around the UK. The biggest problem is finance. Or rather a lack of it.

Pat: We're off to South by Southwest in March.
Ralph: I think we're going to put out a single around the same time as well.
Pat: Although the song we're thinking of putting out doesn't have a title yet. It's the second song in our current live set.
Ralph: See, this isn't deliberate! We really are this disorganised. That's why some people think we're being mysterious but we aren't. It's just a normal day at the office for us.

For more information on Holy Esque visit their tumblr page.