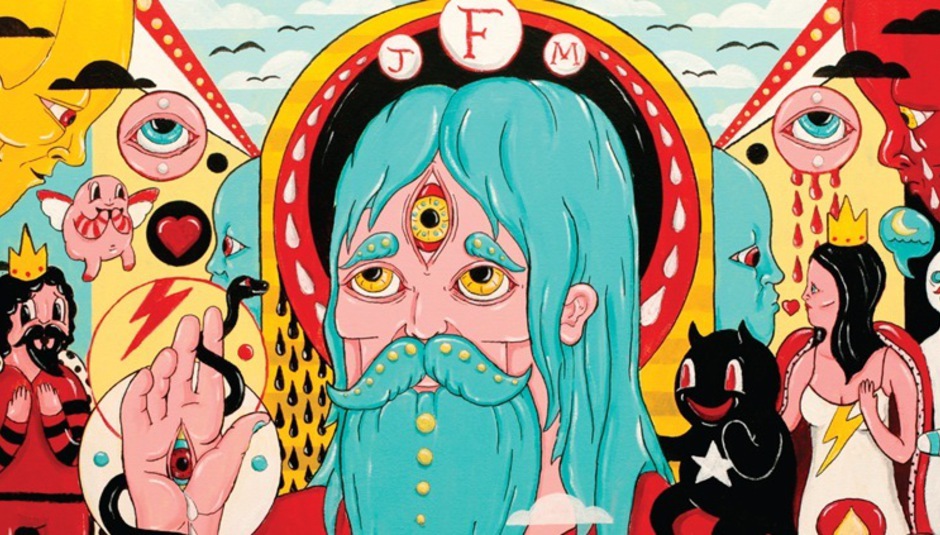 Initially, there was plenty of reasons to steer clear of this record – mainly the fact that Josh Tillman’s previous solo albums had been so, so dull... the drummer from Fleet Foxes stripping away the wide-eyed wonder of his bandmates to sing po-faced folk songs. Then, there was the story behind Fear Fun, that Tillman was depressed with his lot, quit the day job, moved to LA and had decided to write a novel. Clean shaven, short-haired and wearing a fairly preposterous pseudonym, it seemed that Tillman had given up a cushty job in a massively successful band to plow a particularly lonely furrow.

There were reasons for giving Tillman another chance though. Anyone who has seen Fleet Foxes live, particularly when they first arrived in the UK, would remember that the drummer was the one that attempted to engage the crowd with one-liners while the rest of the band were incessantly tuning their guitars. So, underneath the earnestness and the harmonies, there was obviously a sense of humour. Secondly, hearing ‘Hollywood Forever Ceremony Sings’ on the radio, and being hit with a blast of confident, intriguing rock, totally at odds with Tillman’s previous work.

Turns out, we were right to give him another chance. Father John Misty has admitted that his previous work wasn’t up to scratch, that he was bored of his own music, and this was the first time in a while that he’d had fun making a record – that’s clear from the outset. A blast of 1970s inspired mid-tempo rock and roll, Fear Funis full of surrealist imagery, self-mocking mythology and absorbing ideas. ‘I’m Writing A Novel,’ a rollocking imagining of the making of the album (it’s all getting a bit meta….) drags the listener into a crazed Laurel Canyon, riding dune buggies with Neil Young, drinking spiked cocktails and discoursing with monkey doctors.

Characters flow throughout the songs, snatched from the novel Tillman was writing and placed into the centre of tracks like ‘Only Song Of The Ladiesman’, the narrator observing the funeral of a former lothario and reflecting on his own indiscretions.

These arresting images are coupled with moments of stark honesty from the singer, such as ‘Now I’m Learning To Love The War’, where he questions the point of creating art that is simply using up the earth’s resources, or the closing ‘Everyman Needs A Companion,’ where the focus is shifted directly on the man himself as he admits “I never liked the name Joshua/I got tired of J” and his feelings of loneliness are laid bare.

All of this would be meaningless of course, if the music was a pale reflection of the Fleet Foxes or the same stark folk that was released by J Tillman. Thankfully, Father John Misty is a much more adventurous soul, and Fear Fun is instead crafted from a brighter palette, with boisterous drums, strings and even the occasional whistling solo accompanying the harmonies and the acoustics. Tillman’s musical partner in crime on the record was another 1970s throwback Jonathan Wilson, and it’s clear that they’ve had a ball stepping back into such an era as they simultaneously celebrate and disintegrate the Hollywood myth in raucous style.

Watching Tillman perform live as Father John Misty recently, it was clear just how much he was enjoying performing these songs, and it’s understandable – Fear Funis an enjoyable, upbeat album, especially for anyone that’s ever delved into the stories and the mythology of the 1970s California music scene. It’s a shame that Fleet Foxes have lost a key part of what made them so special with Tillman’s departure, but if the result is that we hear more from Father John Misty, it won’t be too disappointing.