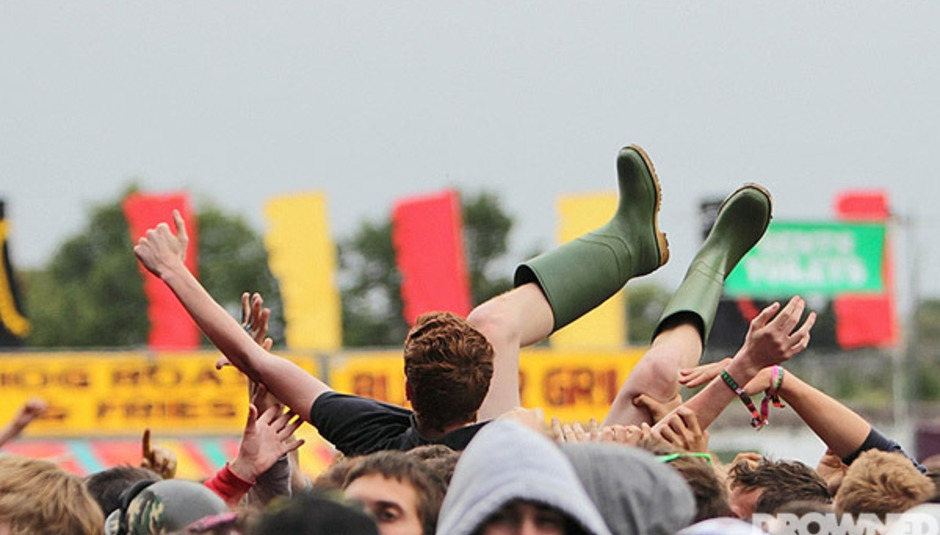 The grin factor at DiS HQ dropped a little when the weather man said there's a chance of rain this weekend. The wide-eyed "it was my first festival, and still one of my favourite festivals" vibes only dimmed a little, and was quickly subsumed in a a chant of 'who cares about rain when there's beer and cags-in-a-bag and MUSIC!!!!'

This year's Reading / Leeds festival, has a line-up which may seem on the face of it to be not too dissimilar to previous years, but it also has so much lurking beneath the surface that it could be the best year ever. We asked the folks preparing to head off to festival who they were most looking forward to seeing. If you are undecided between clashing acts or unaware of any of these, or even if you just want a reminder who to underline in your programme, then this is for you...

But first, here's a Spotify playlist to blast at your desk or if you have premium, on your way in the car...

For anyone that hasn't seen Robert Smith and co. before I can guarantee you're in for a treat. Last year's headlining set at Bestival ranks as one of the greatest live shows I've ever witnessed and May's three-and-a-quarter hour performance at Primavera wasn't far behind either. Expect a set heavy with material from the band's later years - it is the 20th anniversary of 1992's Wish long player after all - yet still jam packed with some of the greatest pop singles ever recorded. We genuinely cannot wait! Dom Gourlay

The first and only time I saw At The Drive-In previously was also at Leeds Festival, some twelve years ago in 2000. It's perhaps somewhat fittingly appropriate then that they'll probably be the closing act for many at this year's event, a perfect way to bring the curtain down on the English festival season. It also happens to be my birthday on Sunday, which kind of makes it a double celebration as 'One Armed Scissor' and 'Napoleon Solo' will be vying for pole position in the alternative 'Happy Birthday' stakes. Many happy returns indeed. Last hope it's a lasting one... Dom Gourlay

Debates about whether rock is dead and The Drop killed guitars or all that seem far sillier when you consider quite how big Paramore are. Hayley and her boys are probably the only act to have crossed from noughties Emo to being a rock band popular enough to be classed as a genuine pop band. They make my inner sixteen year old scream and boy-oh-boy am I gonna be hoarse after this. New songs? Maybe. Some big rapturous anthems? You betcha. Sean Adams

It doesn't feel like that long ago they were an unsigned band (quickly snapped up by DiS' label for single) playing small 70-capacity places like the Buffalo Bar, but Steven and Laura-Mary's rise and rise has seen them sneak onto the Radio1 playlist several times, stowaway on an endless world tour, and now they've only gone and got themselves a slot on the main stage of Reading (and Leeds). They'll thrash their way into the hearts of unsuspecting teens, whilst those of us savvy enough to realise this duo are one of British rock's finest acts for quite some time will be busy pogoing the goosebumps away. Sean Adams

They're in the country. There are rumours. There are always special guests. Their new song is a surprise return to form, and sounds weirdly like Arctic Monkeys re-doing 'Panic (Hang the DJ)':

After hearing the jerky, stutter-pop of Django Django’s single ‘Default’, like many others this year, I decided to give their album a chance and before the first play was finished I was theirs. I fully succumbed to their Beta Band-esque psychedelic adventuring. I’ll be honest, I resemble a miserable old git when I’m watching even the most excitable live band, slow head nods or occasional hand claps are usually my limit. Yet there’s something about Django Django’s mystic beats and colourful rhythms that manage to awaken the long forgotten, permanently sugar-high seven year old that I was – I’m worried for those near me during their set. Daniel O'Dell

Over the past year or so Post War Glamour Girls’ star has very much been on the ascension in the Leeds music scene; culminating in them being selected over many other local bands to open the NME/Radio 1 stage at both Leeds and Reading. It was a just reward for the four-piece who’s engaging live performances charismatically chop together Mark E. Smith’s angry post-punk meddling, Nick Cave’s gruffest vocals, and shades of a rampant Modest Mouse. There’s going to be some much bigger names play that stage who may just struggle to follow them. Daniel O'Dell

One of ThrashHits favourite bands playing on the Main Stage at Reading? Well, yes. We’re going to tell everyone to go watch. The Canadian metallers released Dead Set On Living earlier this year. We’ve seen them on big stages at Download and Sonisphere and they owned the stage both times. They’ll do the same at Reading. Raziq Rauf

Thrash Hits featured this inventive duo’s punky blues in a Future Hits six months ago. Not only do they make music to soak your face in whiskey to, but they also make creepy videos. Look! Raziq Rauf

DiScuss: Who are you looking forward to seeing?