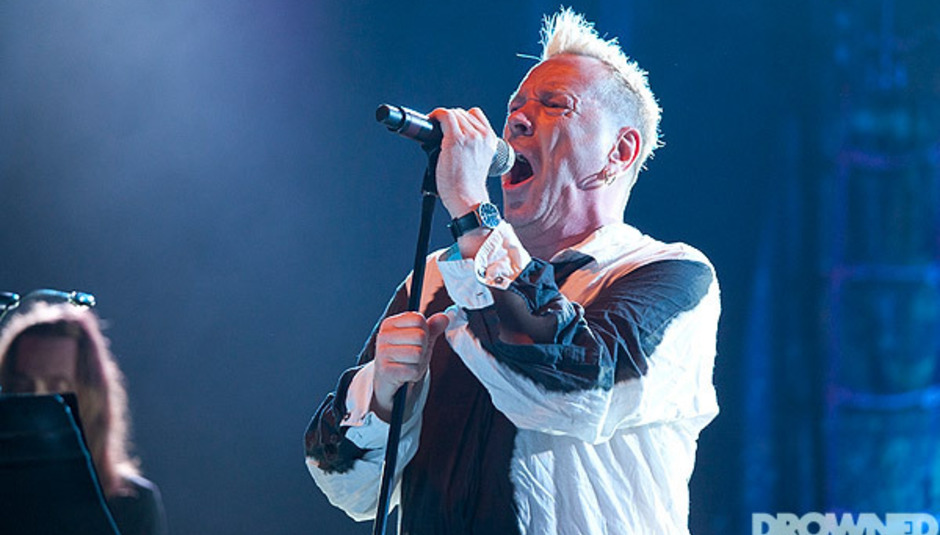 One of the annual highlights of the DiS festival calendar is the Summer Sundae Weekender. Held in the grounds of Leicester's De Montfort Hall and surrounding gardens, it's now firmly established itself as one of the UK's leading "boutique" festivals. Now into its twelfth year, 2012's event saw it moved back a week from its traditional slot on the second weekend of August due to the Olympic Games coverage, and while this meant it would be competing with a host of other big festival names such as V, Green Man and Beacons, it still managed to attract a healthy-sized crowd.

Having slightly downsized in scale from previous years; the big top second stage now removed, instead sharing its bill with what used to be the Comedy & Alternative Stage - this year renamed Into The Wild - along with the even smaller Watering Hole which is essentially a tiny stage fitted into the Real Ale Tent; its homely atmosphere perhaps even more accentuated than in previous years. Even the Main Stage area is slightly reduced, with camping also moved off site this year into the neighbouring Victoria Park. Not that DiS does camping if we can avoid it.

Of course, one problem thrown up by this weekend's festival saturation is a dearth of real headliners, and despite a strong undercard for all three days, Friday and Saturday's bill toppers in particular aren't exactly the most mouthwatering of prospects. Which is not to say DiS aren't fans of Katy B, in pole position on Friday. We are, as her placing in our Top 40 of last year ably demonstrates. However, as her recent hour long set at Nottingham's Splendour suggested, she doesn't have enough material under her belt just yet to command the lofty status of headliner, and it's no surprise that her announcement halfway through the set of a couple of new songs coincides with several punters drifting to the various bars scattered around the picturesque De Montfort setting.

Earlier, we're treated to an eclectic mix of musical delights in between quaffing ridiculous amounts of the 7.3% scrumpy on offer in the aforementioned Watering Hole. Loney, Dear's loop-driven folk coupled with local foursome Dark Dark Horse's dank electronica and Kappa Gamma's janglesome mathrock makes for a pleasant, if somewhat hazy introduction. Clock Opera too are a soothing interlude, tripping the light fantastic somewhere between Foals complicated polyrhythms and Animal Collective weirdness. Even the odd shower can't dampen spirits, as Datarock find to their advantage over yonder Into The Wild. The real revelation on the first day though are Asian Dub Foundation, an outfit who really should be so much bigger in terms of commercial success than they actually are. With eight albums and a career spanning almost twenty years to choose from, they deliver a timely "Best Of..." set that doesn't just steal the show, but threatens to dominate the entire weekend. 'Real Great Britain', 'Naxalite' and 'A History Of Now' resonate intently, their fusion of dub, ragga, punk, hip hop and drum'n'bass conveying Summer Sundae's eclectic musical policy in elegant fashion.

The next day DiS is up bright and early, nursing a hangover but still in attendance for Savages middayish performance on the Indoor Stage. Heralded as the next big things by some, we're still unconvinced by the Siouxsie/Ian Curtis-isms of frontwoman Camille Berthomier, probably because we remember the gorgeous 'Fear Fear Fear' from her time in John & Jehn. Oh well... Dog Is Dead are an altogether more interesting proposition out on the Main Stage. With long awaited debut album All Our Favourite Stories finally set to drop in October, their enthusiastic brand of summery folk pop provides a healthy wake-up call to those still delicate from the previous night's festivities. Minor criticisms aside - listen carefully and you can hear numerous reference points throughout their set - they've steadily blossomed into an engaging and comfortably assured outfit.

In the Watering Hole, Leicester's Buenos Aires are creating an almighty commotion with their incendiary Youthmovies meets Aereogramme altrock. New single 'Record Breaker' being the pick of many highlights, they're another one of Summer Sundae's hidden and previously unknown (to us) discoveries that make this festival such an enticing event. Nottingham's Jake Bugg follows suit, his billing in the tiny real ale tent somewhat surprising considering the meteoric rise he's enjoyed in recent months. Playing a set mixing new material with the more familiar likes of 'Trouble Town' and 'Lightning Bolt', those Robert Johnson and Woody Guthrie comparisons don't seem so futile in such intimate surroundings.

Back at the Indoor Stage, Jonathan Richman entertains us with a set that includes his one and only UK hit single 'Egyptian Reggae' and a smattering of bizarre dance routines. Someone shouts for 'Roadrunner'. He doesn't play it. Several people leave. Such a shame. Outside on the Main Stage, Adam Ant keeps everyone happy by playing the hits that were ('Dog Eat Dog', 'Stand And Deliver', 'Antmusic'), the hits that should have been ('Cartrouble', 'Zerox') and even the odd b-side for good measure ('Beat My Guest', 'Kick', 'Physical (You're So)'). He's joined on several songs by backing singer Georgina Baillie, perhaps better known for her part in the Russell Brand/Jonathan Ross/Andrew Sachs storm in a teacup a few years back and several male pulses switch to overdrive. Nevertheless, his set stands out as one of the day's (and weekend's) finest, so much in fact that it makes us forget about tUnE-yArDs who's on straight after and end up missing the majority of. Sunday is DiS takeover day and the sun is out to greet us, which may or may not be a good thing considering we're curating the line-up on the Indoor Stage. Her Name Is Calla make a pretty good start at setting the scene, Tom Morris's intense compositions augmented by an ever-changing line-up that today includes Maybeshewill's John Helps who goes on to play with his more familiar bandmates straight after. New song 'Meridian Arc' bodes well for their forthcoming third record, while old favourites 'Nylon' and 'New England' book-ended the set in typically apoplectic fashion. Highly impressive then, as per...

Maybeshewill also fly the flag admirably for Summer Sundae's host city, fusing 65dos-type beats with experimental passages honed and perfected from studying Mogwai's back catalogue. Original? No. Captivating? Entirely. Having been excited by Hey Sholay's Kaiser Chiefs play The Shins quirkpop back at 2011's Great Escape festival in Brighton, we're intrigued to see what kind of progress they've made in the intervening months since. Unfortunately hampered by poor sound for the first half of their set, it's difficult to ascertain whether or not they're ready to make that big step up from the indie underground just yet. One song towards the back end of the set reminds us of The Walkmen though, which is a glimmer that they may be on the cusp of something very special soon.

Japandroids too have a few sound problems of their own, but when you're as chaotic and frankly carefree as they are, it makes little to no difference. Imagine Dinosaur Jr if J Mascis and Murph played as a two-piece, or The White Stripes had they been reared on early Sub Pop rather than old blues records. OK, so the most obvious comparison is No Age which would be plausible were it not for Japandroids song structures, which occasionally break the five minutes mark. "Have they finished the first song yet?" asks one wag at the end of their set. Several flailing limbs and sweaty bodies out front kind of tells its own story.

Long-time DiS favourites The Twilight Sad represent a bit of a coup here, Summer Sundae being one of the few UK festivals they're playing this year. It also marks the farewell appearance of Martin 'Dok' Doherty, the band's electronics wizard who's off to concentrate full-time on his Churches project. Consistent as ever, James Graham's menacing stage presence conveys the disturbing messages contained within 'At Home I Became The Invisible Boy' and 'I Became A Prostitute' exquisitely, while a rare outing for 'Reflections Of The Television' coupled with the now familiar closing double whammy of 'Cold Days In The Birdhouse' and 'And She Would Darken The Memory' make for a brooding finale to mark Doherty's departure.

Some bands make more sense live than on record. Step forward Django Django. While their self-titled debut released earlier this year is definitely a grower, live they're an altogether immediate experience. Creating an organic, insatiably danceable fusion of post-punk rhythms, funk driven melodies and unexpected experimental diversions, they're an excitable force to be reckoned with. On the main stage, self-proclaimed man of the people Jon McClure's Reverend & The Makers have also attracted a large crowd, many of whom go apeshit barmy when he launches into "the hit" 'Heavyweight Champion Of The World'. Personally, I don't get what all the fuss is about, even if I am in a seemingly small minority this evening. Saving the best (almost) til last, John Lydon and Public Image Limited bring Summer Sundae to an indignant end. Swigging what appears to be neat whiskey from the bottle, Lydon and band play an inspired selection ranging from their biggest selling singles ('This Is Not A Love Song', 'Rise') to the more avant-garde cuts from legendary second album Metal Box ('Death Disco' and a full ten minute version of 'Albatross'). Interspersed between numbers from their latest record This Is PiL and even a rare run-out for Lydon's collaboration with Leftfield, 'Open Up', they're the only headline act to really justify their slot this weekend, even if signature tune 'Public Image' is surprisingly omitted. Those still with any energy left venture inwards for a double helping of Stay+ and Gold Panda. Both turn in exceptional performances too, although as soon as Derwin Lau leaves the stage, a tired and weary DiS finds itself turning in for the night too.

Click here for our full In Photos gallery of the weekend