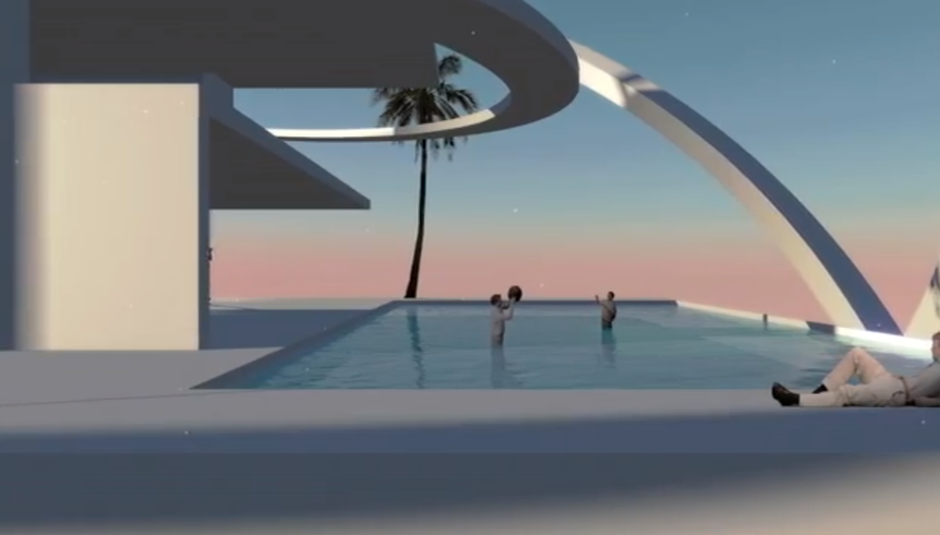 Googling the cove responsible for the liquid digital landscape in Django Django’s video saw me end up on this page. Which I share with you, kindly person, to prove that there still remain whole pages of the internet - the ones right in its spidery, dust-balled corners - that still have the capacity to delight and appal. It also put me in mind of the enviable artwork for Debruit’s long player. Which I also recommend to you, even though it has nothing to do with Django Django’s spotless, unbroken track record of producing pop music that is always warming, and amiable of spirit. Shoot and score, Django Django, who make it look so easy.

If I am remembering it correctly, KT Tunstall once said she couldn’t be naffed with Fence Collective after they started collecting their beard shavings in empty Netto boxes, whereupon they were used as kindling. I say this, in order to demonstrate not just that I still respond like a twelve year-old when I am asked to consider serious artistic endeavours. But also, because I wish to point out that I continue to regard any clan that puts me in mind of communal living (and all the steaming, farty pots of Lentil Surprise / acoustic ‘jam’ sessions / Chicken Coop Cleaning Rotas one would have to endure in order to enjoy paying twenty pence a month in rent) with the suspicion and horror they deserve. As for ‘Michael Rocket’ - which is a superlative song from a delightfully well-named EP - I can tell you that it woozes along without you wanting to slap it or pull up its bootstraps. I mean, it’s notionally shoegaze. But shoegaze WITH PURPOSE - however oxymoronic that may sound.

The Proclaimers - ‘Whatever You’ve Got’ (Cooking Vinyl)

Any pop song that sees fit to include a lyric that will teach you about how Vidal Sassoon was, at 17 years old, the youngest member of the 43 Group; and lead you to discover that they were responsible for fighting such famous rotter fascists as Oswald Mosley - as well as the fact that Sassoon’s famous bob was inspired by the functional principles of Bauhaus - is ALRIGHT WITH ME. You know, my sister got a Sassoony bob once. It is no exaggeration to say that my Mum; upon seeing the buzzcut up the back of her pretty, elegantly gawky, secondary-modern neck; promptly picked up the phone, and bawled out the hairdresser, shouting ‘What have you done to MY DAUGHTER’. Actually it looked brilliant. ANTI FASCIST ART HAIRCUTS!

Lower Dens continue to make the kind of wafty, introspective music I would normally sprint to get away from (shouting 'HIT ME UP WIT SOME SIRENZ, YO' over my shoulder as I did). But for some reason they have got away with it, on 'Candy' they have awayed with its got. I also like the video, in which team-building exercises are performed by am unlikely of assortment of office workers - because it allows Lower Dens to hoist their bass player up into the trees on a wire, where he is forced to play and then be filmed from below - so the harness looks like the crappiest, strappiest nappy. I mean, don’t get me wrong, ‘Candy’ is still a whiny-ass, drifty, horse’s mess of a jam. But it’s the kind you don’t mind stepping in; or would think twice about wiping off your shoe.

If I am hearing Kano right (and it is hard, because mostly when I am listening to Kano I am imagining that it is his eyelashes that are singing to me, and not his facehole), he is saying that he wants to ‘Teach ‘em how to Balotelli’ and ‘Teach Rihanna to move a sofa’. Now either this is some crazy yoot euphemism [Yoofemism? No.] I am not aware of, or Kano is claiming to be immune to Ri-Ri’s charms. Either way, I appear to be writing a review that basically adds up to ‘I can’t hear what they’re saying’ and ‘It’s not exactly Flanagan and Allen.’ Six out of ten.

Gary War - ‘Eye In The Sky’ (Alan Parsons Project cover, on Care In The Community Recordings)

Gary War is not interested in your prescriptive, bourgous bourzhwah borgwah bourgeois ideas about what pop music is meant to be, which is why he has deconstructed Alan Parsons Project’s ‘Eye In The Sky’ and added what he thinks were lacking. Namely: an echo chamber, ten gallons of nitrous* and a pulsing synth bass line. It’s not going to make you run faster on a treadmill or make you want to do sex with anyone and no one is going to ask ruddy Jessie J to gape her maw all over the top of it. But then, that’s good.

[*unforgiveable drug reference for which I almost (but do not quite) apologise.]

Zeus - ‘Are You Gonna Waste My Time’ (So Recordings)

I know retroism is like super wrong and all, but if, like me, you think The James Gang’s Funk #49 is well one of the best songs ever (no returns, I.D.S.T.) then you will love Zeus. They are not figging about or worrying if it is wrong to want to snog the face off of warm fuggy 1970s riffs that put you in mind of orange cars and plastic seats sticking to your thighs in a nice way. I mean, I do get the impression that the sort of men who write this sort of song long for an age where it was still assetable to call women ‘chicks’, but screw the femmists, I don’t even mind that. And you know, I get your point about how it’s all kind of pointless because music has made this sort of point before, but I just dig it. And that is MY POINT. Hey ho.

Wendy is on the internet, here. If you are feeling all sun-drenched and wanton and have eye-boroughs like Brooke Shields/are in possession of a white bikini, this is quite good.