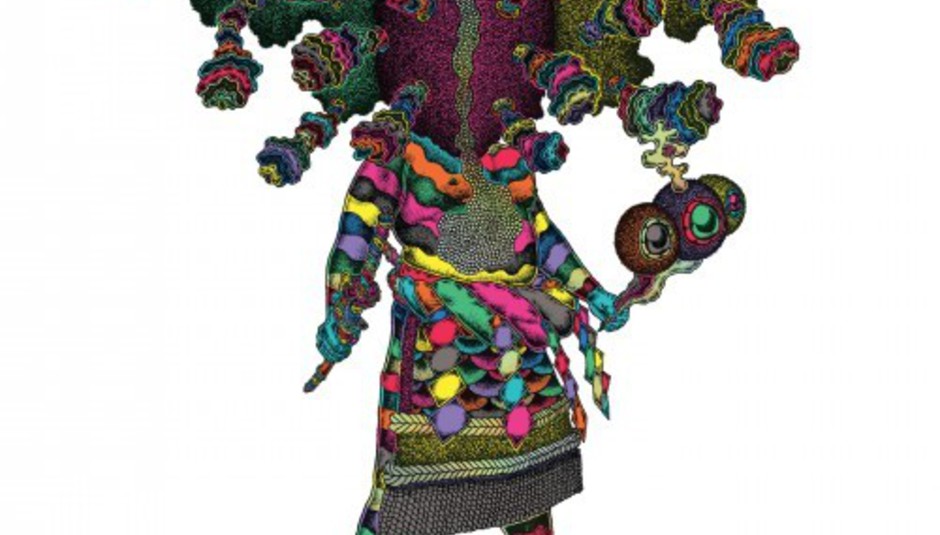 When press releases promise the sound of ‘unapologetic dread’ it is impossible not to have your interest piqued. Which is why Dead Fader’s metal machine music is a heartening serenade for those of us who want music to hound and punish our ears - rather than have it try to chat them up or slip them the tongue (worst sex-phrase ever). The greatest thing about ‘Fishsh’ is that it has a hypnotic air, and it is wielding its distort in a careful way; pounding along without losing sight of structure or texture. It also knows that industrial music, however injurious it might be, still has to have light and shade. As well as the ability to seduce, however firm a beating its instruments might be being given. AND it has the best artwork this week by a country mile. Oh, it made me grin.

Topic-appropriate words for this music include: undulating, tidal, moony. It has also has some beautiful muted brass, and a refrain that laps, in a bleary way. Basically it’s what you might put on if you suddenly found yourself body-swapped with a jelly fish, and wanted to waive your frondy tentacles at a really hot cnidarian. Yes, yes it is.

All The Young - ‘Another Miracle’ (Warner Bros)

Apparently: “the kind of fist-pumping fodder that festival crowds were custom-built for.”

Verdensrommet are a late entry, and I am including them in part because ‘Nytt’ (which means ‘new’) was sent to me by a charming Norwegian fellow who was kind enough to translate their foreign. In doing so, he admitted some of the poetry had been lost, so I will just tell you that it seems to be about seeing someone you once loved, but they have moved on, but it doesn't stop you having a bit of wrongtime together. So it’s about longing, and the future, and that thing that happens when you see someone you had a life with but now they’re all different, as if they occupied a parallel universe; romantic Chaos Theory. And it starts out quite ‘My Girls’, if ‘My Girls’ was simultaneously a) sung as a torch song; b) sung under a spotlight; c) not a paean to homesteads / domestic bliss and d) more about secret, regretful snogs. Absolutely charming, either way.

When Splashh sing about how they ‘want it’ and ‘need it, today’ I have a wry smile on my face, and it is the exact same face my Mum tossed in my direction when I pointed at some Air Max Jordans and assured her that my entire life depended on them; no other running shoe could rehabilitate my social standing at St. Stab’s. In the end, she was kind enough to buy me some entry-range swooshers [no air bubble, no star-jumping b-baller] and that’s what ‘Need It’ feels like; a compromise plimsole of a single which we neither deserve nor really desire. It’s worse when you watch the video or call up their tumblr – so many petulant pixels when what they really need is a RUDDY GOOD DOSE OF THE MASLOW PYRAMID. I’m not saying ‘Need It’ isn’t okay. I’m just saying IT DOESN’T KNOW THE VALUE OF THINGS.

I never get jealous when people say they have interviewed musicians, because mostly interviewing musicians is incredibly boring, if not actively pointless. By all of which I mean: WHY WOULD YOU ASK SOMEONE TO TALK ABOUT THE MEANING OF THEIR ART IN THE PRECISE MEDIUM THEY HAVE EXPRESSLY AVOIDED CHOOSING TO EXPRESS IT. I don’t want musicians to explainify themselves, and it’s unfair to expect them to be anything like so interesting or heart-stopping as the feelings they provoke. That does not mean I do not get a tiny bit green when I read a sentence like, ‘I met Gerard Love in a café in Glasgow,’ - although to be honest, I would rather just buy him some tea and try to beat him at the quick crossword, while twirling my hair in a meaningful fashion. You use your guitar, Gerry love, and I’ll use the language of HAIR.

Those of you unmoved by the restorative powers of The Shins have my (bottomless, unfathomable) pity. If you don’t want to bellow the chorus of ‘It’s Only Life’, or feel the urge to punch the air just like Judd when it comes on, I can’t help you. I mean, I would call this song - and its lovely chimes - ‘reassuring’, if that did not make it sound like a huggy, warming, soup-like enterprise; liked by the kind of people who fetishise tea. Oh Lord. It’s not like that, is it?

It’s a re-work of Little Fluffy Clouds. It’s not got Rickie Lee Jones on it. It has got Lee Scratch Perry. If you need me to describe what this sounds like I got no time for you, friend.

My only other brush with Van She was a re-rub of Walter Meego’s ‘Forever’, which is what I put on when I want to jam sugary synths into my ear canal and obliterate all thought. ‘Jamaica’, however, is atmospheric, bouncy pop music for people who wish Phoenix were a bit happier, and more disco and um, a bit less hung up on that whole, Being French thing.

If the video for ‘Gonna Make My Own Money’ weren’t trying to jam so many pockets-artfully-hanging-out-of-denim-cut-offs, BaD GuRl clichés in the general direction of my face, I might not currently be in a massive snit about how often these two women will insist on bloody touching each other as if WOO LOOK THOSE TWO GIRLS ARE ABOUT TO SNOG. Honestly, they're as bad as the bloody beach volleyball players, hugging IN THEIR PANTS after EVERY bloody POINT. As it stands, the whole thing is unbelievably tiresome; transgression for people who think drinking Jack Daniels makes them somehow more ‘rock’. WELL DONE YOU HAVE HEARD OF BOURBON.

Wendy is on the internet, here. Did you see how TRON the fencing was? It was mega. Also: LOUIS SMITH CRYING. You know, a person could get pregnant JUST BY LOOKING AT HIS ARMS.

"The greatest education you could eve...