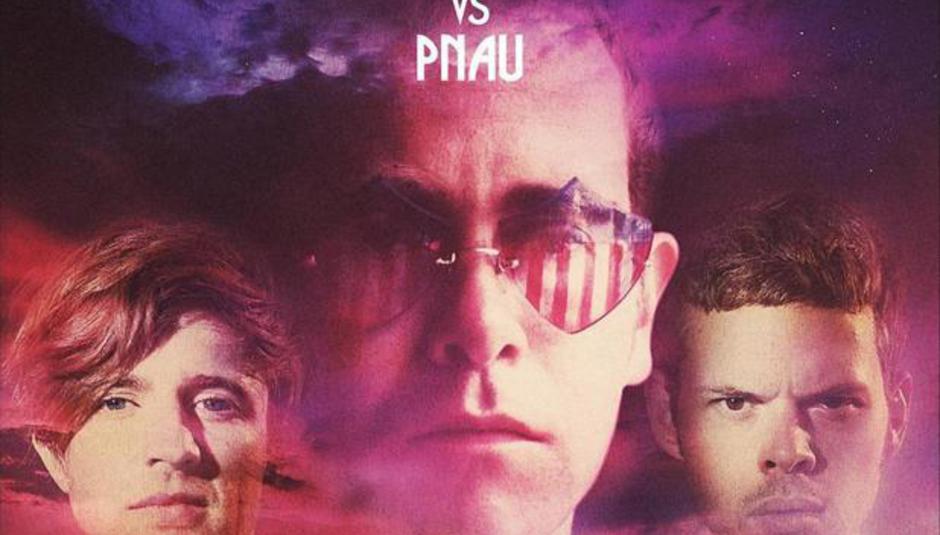 It's an interesting time to be a member of Pnau. The Australian dance act, made up of Nick Littlemore and Peter Mayes, have (until recently) been relatively unknown over here. Apparently I'm the only one who noticed Soft Universe, which makes me sad. Yet, at the time of speaking, the duo are number 1 in the album charts with Good Morning To The Night - a reinterpretation of Elton John's 1970s back catalogue. Oh, and the title track is one of the official tracks for the event I think we are now legally only allowed to refer to as 'The Giant School Sports Day'.

I caught up with Peter Mayes, and got to chatting about performing with Mr. John in Ibiza of all places, whether misery makes for the best pop music, and the small matter of Empire of the Sun...

How was it performing with Elton in Ibiza?

It's amazing. When we did this record, obviously we had no idea how it would be received by Elton - we just wanted to make him happy. But the opportunity to perform on stage with him, that's another level. It was incredible you know - I mean we're not really worthy of being on stage with him, a legend like that! But everyone including him had smiles on our faces the entire time. It all went down without a hitch. And it was really cool to see him playing to a very different audience to what he normally plays to. They were all chanting his name!

One of the things that stands out about 'Good Morning To The Night' is that they are their own songs. Was that the initial intention, or was it originally going to be a bit more of a standard 'remix' job?

I think to use the word 'remix' kind of cheapens it, it's more of a reinterpretation. As Pnau we don't really do remixes, it's not really our thing. There are other people out there who are more specifically doing that. We like to create music, not just to get people in the clubs... We don't really play that game. If you compare it to something like the Beatles' Love record, I think it's quite different to that. Really I think the intention was to unearth a lot of lesser known classics within his back catalogue, because there's so many, and also so many we didn't know.

We really wanted to incorporate as many songs as possible in order to create new music. That was really the thing. We really had no idea how it was going to turn out but the great thing was that [Elton] didn't limit us in any way creatively, he didn't try and point us in any direction or tell us what to do. He just gave us the tapes and said 'Do whatever you do', carte blanche. He just said 'Do whatever you want and whatever you do, I'll be happy with' and luckily he is happy with it!"

I think that's something that's really noticable about this record, as you say, they are songs in their own right, which is great for the more casual Elton listener like me. But at the same time, the longer-term fans can play 'spot the sample' too!

People love playing that game! Especially fans because they're such die-hard fans. He's been making music for 45 years!

It has been mentioned that Elton's essentially a creative mentor What effect has his input had on your own music?

I think we've grown a lot as songwriters and I think it's the nature of a record like this, when you're able to pull apart such beautifully crafted songs and actually get the multi-tracks, it's just an education in songwriting! Apart from being exposed to someone like that on a personal level, who's been through everything there is to go through in this crazy music business, and who can really help you, give you advice and point you in the right direction in a lot of cases. Not just musically but, you know, general decision-making, what to do with the music...Just an incredible education to be able to pull apart those songs, which are so beautifully crafted. Especially the Gus Dudgeon ones, who's just such a genius producer, who unfortunately passed away a few years back, we have to give full respect to him. And to Bernie, who's an incredible lyricist. I don't think there's anyone who really compares to him. He's more like a novelist who chose to write songs. He's a real pro. Being able to really intricately delve into a catalogue like that is just the greatest education you could ever have.

Moving on slightly, I have to say that I really liked 'Soft Universe'.

Thank you! You're the only one!

Noooooo! If I may venture, the album does seem to be primarily about a specific event, whatever that may be, and what I was wondering is whether for you, whether that's what the best music is about, the deep and meaningful? Or is it all just about making it go off?!

Even though that record was a bit of a disaster for us commercially... our music has never really been that poppy and that melodic. The negative experience was mainly in Nick's life, and what he was going through, because he wrote the lyrics. What I wanted to do was to take the negative experience and make positive upbeat music out of it, so that even though the lyrics are quite dark and quite brooding, we didn't want to make a dark and brooding record because there didn't seem to be any point in that. We wanted to make something was positive and uplifting out of those experiences. I think it was just a natural evolution of our songwriting. If you listen to the first two [albums], and then what we did with Empire of the Sun, I think it was a natural progression.

I must admit I pushed Nick a lot to really sing! I really wanted him to step up and be the lead vocalist I knew he could be. So while it didn't really work, it was still a really good experience for us. I'm not sure if it's one we'd repeat - we don't really like to repeat ourselves anyway, we like to do something new each time. But yeah, it was an interesting education, just in collaborating with a lot of people as we always do, and we learned a lot.

I think that's actually the thing I personally really liked about it, because for me, that's what great pop music is about - trying to find that intersection between the happy and the sad - making something uplifting out of what can often be quite grim moments.

How are you feeling about 'Good Morning To The Night' being one of the official Olympics songs?

We didn't write the song with the Olympics in mind. It's great. It's an incredible thing to be given. What an amazing opportunity to have your music heard by such a wide audience, on such a big event. I had no expectations of anything like that! It was just a nice little bonus.

Finally, you mentioned 'Empire of the Sun' there. I've heard that you're quite deep into producing the new album, so was just wondering if you could give any hints as to what we can expect?

You never want to do album 1, version 2. That's probably what A&R people want you to do, because it seems like, if you look at it in a... if you just have a board meeting about it, it probably seems like the smartest marketing thing to do! I think Luke and Nick and myself are a pretty strong creative team. There's a lot of big opinions and very talented creative minds thrown in the pot together. It's just really exciting, we're getting closer to the end of that, hopefully in the next couple of months we'll be pretty much done with that.

It's really cool, we have so many tracks - there's probably like fifty tracks, and thirty songs I'm working on right now! Which is crazy but it's really exciting.

Similar to the first record, one thing that is similar is that we've delved into many different sounds and styles. There's no point just making five new versions of Walking On A Dream and five new versions of We Are The People, know what I mean? There's a lot of pressure in today's music industry, obviously, to have singles, and we're constantly aware of what with every project we do, not just Empire.

But yeah, the new music is really going to blow people away. Just having a singer with the depth of someone like Luke Steele where he has so many different elements to his voice, and can push himself to achieve almost anything vocally and melodically. Just working with someone like that is an inspiration, Luke Steele is the main inspiration behind this project. So Nick and I are constantly trying to put him in the right place musically where he's inspired to do the right vocal and the right melody. So it's up to us as producers to get the best out of him, like it is with any vocalist.

Good Morning To The Night is out now.