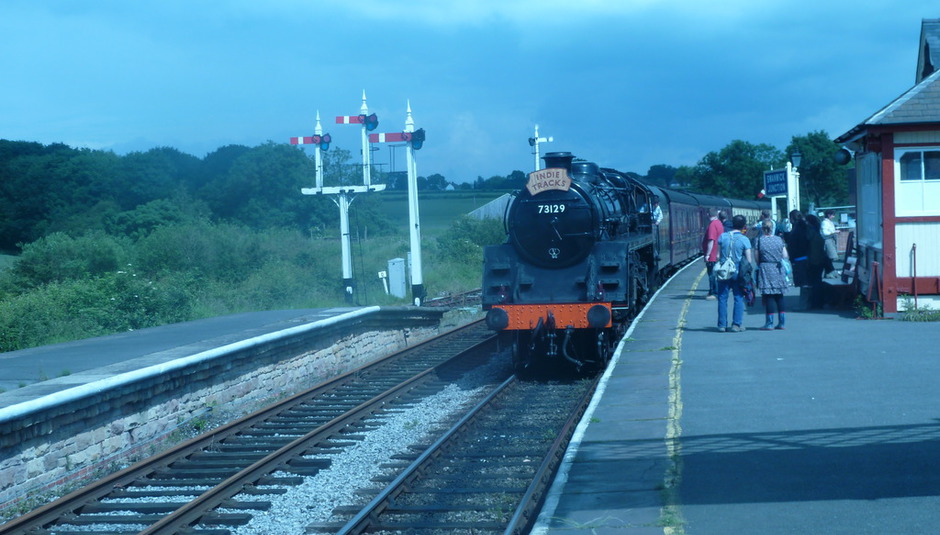 As the most unique festival of its kind on these shores, Indietracks continues to go from strength to strength. Situated on the site of the Midland Railway Centre in Butterley, Derbyshire, its three main stages located on the back of a truck, a converted engine shed and in a church respectively, not to mention the performances inside the carriage of a steam train, there really is nothing else that compares. Arguably the friendliest event on the circuit too. The nearest you'll get to a VIP area here is the onsite buffet carriage where Belle & Sebastian's Stevie Jackson can be found exchanging pleasantries with whoever happens to be in the vicinity, or members of Evans The Death and September Girls, who look genuinely surprised at being recognised. It's a place where old friends become reacquainted and new ones are made. Where artists come off stage then chat for hours in the merchandise tent after. Egos are left on the station approach (if such at thing exists with the majority of performers here at all). Then there's the staff - mostly volunteers - who'll entertain us with stories about how they've ordered extra stocks this year for when the bar inevitably runs out of alcoholic beverages, or the Nottingham Forest supporting steward who informs us she's spent Saturday morning praying for the rain clouds to descend on Derby and Leicester instead. And of course there's the music, lots of it.

When the organisers announced this year's main (outdoor) stage was to be curated by Slumberland Records, the label created by Mike Schulman, formerly of Black Tambourine, anticipation levels reached fever pitch. Not least due to Black Tambourine reforming earlier this year, albeit briefly. While their much-hinted appearance at the festival never materialised, the overall strength of this year's line-up quickly dissipated any rueful thoughts regarding who wasn't going to be playing. Not that the rumour mill didn't rear its head over the course of the weekend, with The Vaselines headline slot featuring some "special guests" creating all sorts of theories as to who they may be, mostly arriving at the names Grohl or Novoselic. That neither make an appearance in the Derbyshire countryside will come as a surprise to most.

Taking place three weeks earlier than its traditional slot on the last weekend of July, due to the impending Olympic Games, DiS arrives - umbrella and wellies at the ready - prepared for the expected downpours that infiltrate both Saturday and Sunday's schedules.

Murcia's Vacaciones are like a Spanish indie supergroup-of-sorts. Singer Ruth and guitarist Rafa will perform the next day as Minibar. Here though, their sixties-inspired indie pop acts as a soothing entree to the weekend's festivities. Although not entirely edgy, it manages to avoid twee territory at the same time. Suitably impressed, DiS heads to the Elefant Records merch stand at the end of their set in pursuit of a Vacaciones record or two.

Evans The Death too are something of a revelation. Although still only in their teens, they've quickly established themselves as a major force on the DIY underground scene, and their forty-minute set here is exemplary from start to finish. Concentrating mostly on material from their self-titled debut released earlier this year, 'A Small Child Punched Me In The Face' and the closing 'I'm So Unclean' proving particular highlights. We later learn that this show will be new(ish) bass player Lan's final show as she's concentrating full time on her Joanna Gruesome project. With the storm clouds hovering menacingly above, DiS hot foots across to the engine shed where The Rosie Taylor Project play errant if occasionally tranquil folk. It's around this time that Jyoti Mishra aka White Town is due to play on the steam train, so umbrellas at the ready we head over to the large queue that has formed on the platform. Sadly, soaked to the skin, we take cover in the station house instead, reliably informed that his set closed with a double whammy of his 1997 number one hit single 'Your Woman' and a cover of The Wanted's 'Glad You Came'. Gutted at missing out on such treats, DiS consoles itself with another pint of Cheddar Valley cider. Damn you traditional British summertime, damn you.

Over on the main stage, both Gold-Bears and The Jasmine Minks turn in grandiose performances, albeit from different ends of the musical spectrum. Whereas the former excel in the kind of delirious punk-centered pop that bands like Symposium and The Wedding Present trademarked as their own once upon a time, the latter's trawl through their Creation Records back pages is both joyous and tearful in equal measures. They won't be the last to achieve a similar mix of emotions, as both 14 Iced Bears and The June Brides discover the following day. Swedish foursome Liechtenstein too are a bubbly antidote to the miserable weather, evoking memories of the Mo-dettes, The Go-Gos and the Au Pairs (i.e. great!) throughout.

In the church, the aforementioned Joanna Gruesome and Hamburg's Mikrofisch also make substantial claims for the coveted title of "highlight of the day". Having already rocked Nottingham's Chameleon venue some forty-eight hours earlier at the official Indietracks warm-up party, Joanna Gruesome are equally as incisive here. Mixing visceral brutality with an occasionally delicate touch, they evoke memories of people like Dinosaur Jr, Superchunk and No Age, even throwing in a noise-heavy cover of Galaxie 500's 'Tugboat' at the end for good measure. Mikrofisch on the other hand fuse techno beats with shouty-but-catchy choruses like the Germanic cousins Bis never knew existed. It's also possibly the only time you'll see an entire church congregation raving incongruously between the pews and aisles while the three-piece have the time of their lives on the altar/stage.

Hovering between the indoor and outdoor stages, one eye cast firmly on the rain, we catch the last three songs from Standard Fare and the first part of Go Sailor's set. While the former don't quite hit the heights of their previous appearances here, the latter, featuring Tiger Trap's Rose Melberg and Amy Linton of The Aislers Set, they're the riot of pristine pop precision anyone familiar with the two's previous work would come to expect. A selection of strong headliners across all three stages puts DiS in a dilemma. However, Summer Camp's set in the engine shed leaves us slightly underwhelmed so we brave the great outdoors once more and flock to the church where Gordon McIntyre is playing an engaging mix of solo and ballboy material. Meanwhile main stage headliners Veronica Falls keep it short but sweet, clocking in at just over forty minutes while delivering perfectly executed renditions of 'Stephen', 'Wedding Day' and 'Come On Over' among a host of others. Saturday over, it's something of a blessing that DiS lives a twenty-minute car ride away from the festival site as the heavens open once more. Bricks, mortar & a warm bed > tent & sleeping bag every time.

Nursing a cider induced hangover, our first encounter of the day is with the excellent CD stall in the merch tent. Several pounds exchanged for a bag full of CDs later, DiS ambles across to the engine shed where Glaswegian trio Golden Grrrls are stirring up a heady racket with their Buzzcocks flavoured pop. Outside, Brighton's 14 Iced Bears roll back the years with impeccable style, their psychedelic noise of the mid-1980s predating yet obviously influencing a lot of the shoegaze bands that followed. Early singles 'Come Get Me' and 'Cut' understandably gauge the biggest response while elegant droner 'Hold On' could easily be a lost recording of Ride in their infant stages. Utterly sublime.

It's at this point where DiS finds itself inundated with texts about the Wimbledon tennis final, and Andy Murray taking the first set, so without further ado we board a train and head to one of Ripley's finest drinking establishments, The Talbot. Who aren't showing the game, but do entice us to stay courtesy of the 7.5% Norman Cider, we're told - and two pints later in full agreement - is their speciality. Unfortunately, that means we miss the last train back to the site so set off on a muddy walk through the countryside, accompanied by two members of Mikrofisch nonetheless. Sadly, we arrive back onsite moments too late for Dublin's September Girls, whose set at the warm-up event last Thursday was another unforeseen highlight. However, we do manage to catch the last quarter of Girls Names set on the main stage, and as with their three performances at this year's Primavera Sound, sound flawless once more.

Seattle's Orca Team have already released one of 2012's most understated yet excellent LP's in Restraint, and their melancholic surf-pop goes down a treat in the Sunday teatime slot. The June Brides are also a sensational blast from the past, stylishly displaying why the likes of Franz Ferdinand and the Manic Street Preachers cite them as pivotal influences to their very existence. Frontman Phil Wilson is an enthusiastic bundle of energy from start to finish with 'Sunday To Saturday', 'No Place Called Home' and 'Sick, Tired And Drunk' (where recently reunited guitarist Simon Beesley takes lead vocals) all standing out. Named after a Pale Saints song they may be but Belfast originating outfit Language Of Flowers actually indulge in some of the most melodically diskant pop this side of Mars Audiac Quintet era Stereolab. Suitably impressed, DiS stays until the end of their set, even though the equally impressive ABC Club are (we're told) playing a show stealing set to a packed church over yonder. Original post-punks The Monochrome Set are an interesting quandary too. While some Indietracks traditionalists consider their presence on the bill a tad out of place, hence the reason the engine shed is only half full for their show, those that do stay are treated to a beguiling, but mostly exhilarating performance drawing from a back catalogue stretching over thirty years.

As a rescue helicopter hovers intently, fingers point one last time as cries of "Is it [insert name of Foo Fighter/Nirvana member here] ..?!?" punctuate the night sky. Of course it isn't, but joining The Vaselines on stage are a host of friends and musicians including Stevie Jackson and Bobby Kildea from Belle & Sebastian. What's more, they're in terrific form. Older numbers 'The Day I Was A Horse', 'Son Of A Gun' and 'Dying For It' blend effortlessly with material from 2010's magnificent comeback record Sex With An X. With Indietracks 2012 drawing to a close, it's time once again to reflect on what has been an excellent weekend of music at arguably the UK's most civilised and downright enjoyable music festival. We haven't even touched upon the impromptu sets in the marquees from the likes of Tender Trap and White Town, or the aftershow disco where Springsteen's 'Born To Run' and East 17's 'Stay Another Day' gleefully rub shoulders with The Shop Assistants and Kenickie's finest hours ('I Don't Wanna Be Friends With You' and 'Punka' for the uninitiated).

See you again next year for more of the same...

Hip hop vs hip hop: Why we must defen...