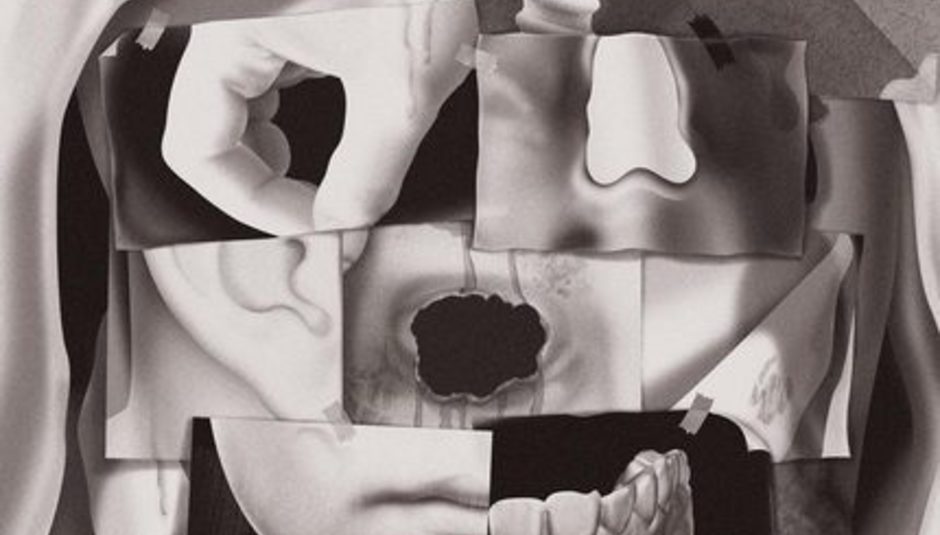 When my nephew is frightened of something he will often say it is funny, because saying something is funny is easier than saying ‘Fuck this, take me HOME, WENDY’. It happened once when there was a huge brown dog, and it was barking, and he said, ‘That dog is funny’. I mention this, because I have a similar reaction when I listen to dark and frightening music; I pretend I am not scared by smirking. And I definitely did that when I started to listen to ‘Ghosst(s)’, which is gothic electronica you wouldn’t walk home at night to unless you were an absolute loon. It has a double bass on it that has definitely been carved out of black-market, dark religious relics; it is arresting; it is the sort of atmospheric jam that compels the people of the internet to write THAT SHIT IS THE MAD NOTES; all its strings sound like big cats, growling. And I smiled when I listened to it, because I was ruddy terrified.

We may often talk of crisp production in these here parts, but this really is a cut above - the sheer precision on Dobie’s 'Nothing To Fear' is a joy. On ‘Hustle With Speed’, in particular, it is all about the tightness of its execution, with rolling snares that sound like a marching band on Haumea. Marvellous.

Rayographs - ‘My Critical Mind’ (Everyone We Know)

The thing I really love about ‘My Critical Mind’ - apart from its desert-bleak strums and its gathering, unstoppable pace - is that when they begin the spoken word portion of their single, one of them sounds slightly posh. So that the overall effect, is like watching Wild At Heart, but having Laura Dern dubbed over by a Press Gang-era Julia Sawalha. And of course, that in turn made me want to listen to this. Very good, with an excellent Haxan Cloak re-work.

Someone is doing a very good impression of John Squire on this record and they sound like they are having a lot of fun. I’m just not sure it’s as much fun for us.

Given that there is only one of him, it is rather odd to get a release week in which two men have the kind of comically low, bass-rich voices that Stephen Merritt is blessed with. Mosman Alder's ‘Raisin Heart’ is a torch song that reminds me a little of The Dears, even if it is a torch song I want to cross-examine, especially when it compares the size of its heart to a LSD-delivery system. ‘Burning Streets of Rome’, however, is a natty and naïve little pop tune which either has no guile whatsoever, or is calculated enough to come from a band who call themselves, quite unironically, The Smittens. Don’t call them twee, everybody! That would be WRONG.

The second of this week’s spoken word treats come from Kormac, who has Irvine Welsh giving an Old Bloke lecture about how we moderns always have our face in a screen of some sort; he wants you to PUT IT DOWN. Having tried this recently, when I attempted to listen to the whole of a (Gerry Rafferty) album without even looking at my phone or laptop once; and having felt the inhuman, caffeine twitch as my fingers cried out for something to swish as I lay down, panicked, on my bed, I think I might concur. ‘Don’t buy me a kindle for Christmas, just come by and re-kindle my heart,’ says Irvine. And though part of me wants to be young and carefree enough to say ‘Oh sod off, Grandad’, I agree. Put it down.

Casiokids spritely, stompy-beated latest is so inoffensive you could stock it in Walmart, take photos of it in the bath, or show it to your Grandma - not least because the animation in their videothing is cuter than a kitten with a milk mustache. Strangely we live in a world where straight-up happy or positive things are so rare, they're almost outré or transgressive, but for your own sanity / the enjoyment of this song I suspect it might be best to forget that.

As you can imagine, Justice' latest single has its tongue in its cheek; they are not a band known for sincerity. And it’s a smashing thing, if you’re not bored of irony or don’t mind ideas being worn with a wink – 'New Lands' is as stompy, glam and postcard-saucy as we have come to expect. The video is the neatest thing though, because it tells the story of an 80s action hero who has his life made considerably more difficult by the closing credits of his film. As they literally begin to impede his life, tripping up cafe patrons and tipping the trays of waitresses, it has a strange sort of honest poignancy. Which, in turn, is not what you expect from Justice.

EDIT: FYI I should point out that the above video is fan-made. The official Justice video will appear on their YouTube channel here soon. You can also listen to some re-rubs on SoundCloud, here.

Beat Connection’s ‘Silver Screen’ has a respectable playcount on my iPod and very jolly it is too. But like ‘The Palace Garden, 4am’, it is the kind of song that you have to be ready for. Like the one wacky bloke in an office, it has an irrepressible, treacly happiness that heard at the wrong time, could make you murderous. ‘Let’s have a good time and not worry too much’ says a quote on the press release. And I want to say, 'Yes, Beat Connection, that's all very well, but what about SYRIA?' - despite having a Newsround-level familiarity with the subject.

Negative Pegasus are calling what they do repetition rock - and never has a style been so aptly named or clung to; this is a song which is getting to its point in its own sweet time. There is no hurrying it up, and I find I respect that. Some art demands that you slow your brain down before you take it in, and though I don’t like doing what I am told, at all or ever, I will do it for ‘Floating Omen’.

I realise it is very wrong to call a French pop tune 'jaunty', but no word better describes ‘Je Ne Vois Que Vous’, which might as well be wrapped in a headscarf in the back of a sportscar, or gamboling through a field, or being filmed in gawky monochrome on the end of a see-saw while its gleeful beau sat on the other end. If it doesn’t already come with tippy-toe, dance-sheet showing you how to move to it, I will happily make one. If you are in the market for a Colombian take on Sabbath’s 'Iron Man' that is actually a paeon to rum (and as ratfinked as that makes it sound), this is for you.