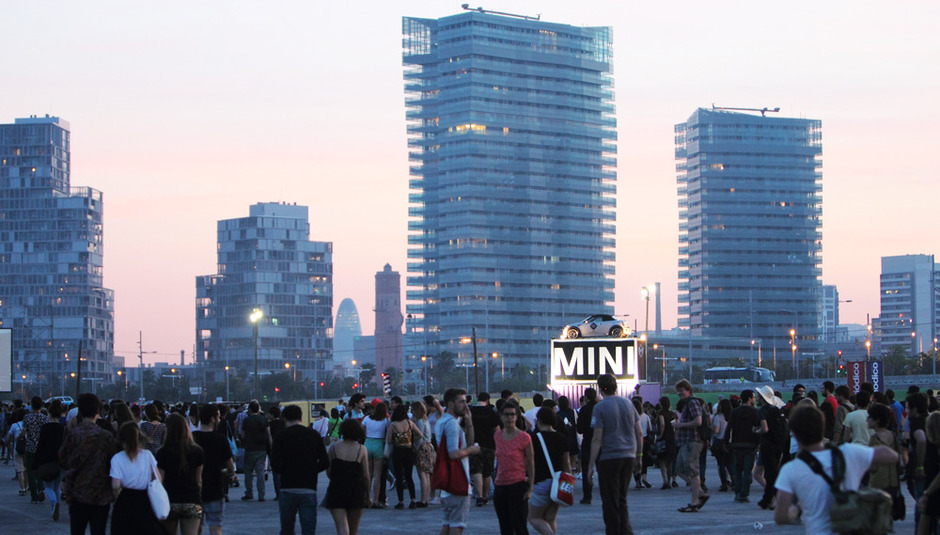 Primavera Sound 2012 continues apace (or, continued apace, at the start of this month): here is part two of our festival coverage, from writers Si Truss and James Skinner and snapper Burak Cingi, featuring reviews of Dirty Three, M83 and AraabMuzik.

“This is a song called ‘I Was a Teenage Haemorrhoid or Bono’s Rectum Is My World’” declares Warren Ellis as Dirty Three launch into an intense, hyperactive three-way jam that may-or-may-not bear a passing resemblance to ‘Rain Song’, a low key cut from their recently-released eighth album Toward The Low Sun. The instrumental trio appear on the ATP stage tonight on the back of that record – it’s an album that has taken them seven years to complete, and one that smears an added layer of gain-driven filth across the meld of grit and beauty for which the Australians have made a name for themselves. As a result, the band take to this year’s festival circuit with a level of energy and vitality that musicians two decades into their careers have no right to possess. Even by his own high standard Ellis is on exceptional form; scissor kicking his way around the stage - attacking his violin as if he’s finally releasing 20-years worth of pent up aggression on it - before diving onto the barriers to grind his hips at the audience in a manner so vigorous that you can practically feel the front five rows being stripped of their remaining innocence. (ST)

Tonight is my first time seeing M83, and, considering the album I’ve spent most time with is probably 2003’s Dead Cities, Red Seas & Lost Ghosts, it’s fair to say I wasn’t expecting something quite on this level. M83 brings it tonight, Anthony Gonzalez profuse in his appreciation of the sizeable crowd, his group’s music shimmering, swelling and towering over all and sundry, a hopelessly pretty lightshow illuminating the players from behind.

It sounds, frankly, enormous. Songs like ‘Reunion’ and ‘Steve McQueen’ from last year’s sprawling Hurry Up, We’re Dreaming whir by in effervescent neon strokes, the former seeing a group of mega-fans next to me pogo-ing and chanting its wordless refrain. ‘Midnight City’ arrives and the crowd erupts, Gonzalez screams “BARCELONA!”, the band winds down with the pounding, eventually euphoric rush of ‘Couleurs’, and I kind of feel like I’m at a rave: beautifully, blissfully exhausted. (JS) The evening’s next burst of hyperactivity comes courtesy of AraabMuzik, albeit in a vastly different form. Whereas Dirty Three’s set was rich with intricacy and detail, there is absolutely nothing subtle about Araab’s beat-chopping workout over on the Pitchfork Stage. That’s not necessarily a criticism though – there’s something mesmerising about watching the Rhode Island-based hiphop producer punch out frantic, rough-edge drum patterns on his twin MPCs (he’s kind enough to set up a video screen so you can keep an eye on exactly what’s going on).

There’s nothing particularly fashionable or sexy about Araab’s music, and at times his sonic palette wanders dangerously into the screechy midrange territory of Skrillex et al. Fortunately, the music never pauses long enough to get properly wobbly, and it’s this focus on energy rather than aggression that prevents AraabMuzik falling into the category of drop-obsessed, dance-music-for-homophobes-and-steroid-abusers that mainstream America knows as dubstep. At times it’s hard not to worry that what you’re witnessing is bordering on novelty act ('oooh look how fast his fingers move'), but above all it’s just a lot of fun, and when he drops the all-out Euro-pop of ‘Streetz Tonight’ it’s near enough impossible not to enjoy it. (ST)

All photos by Burak Cingi; visit our gallery here