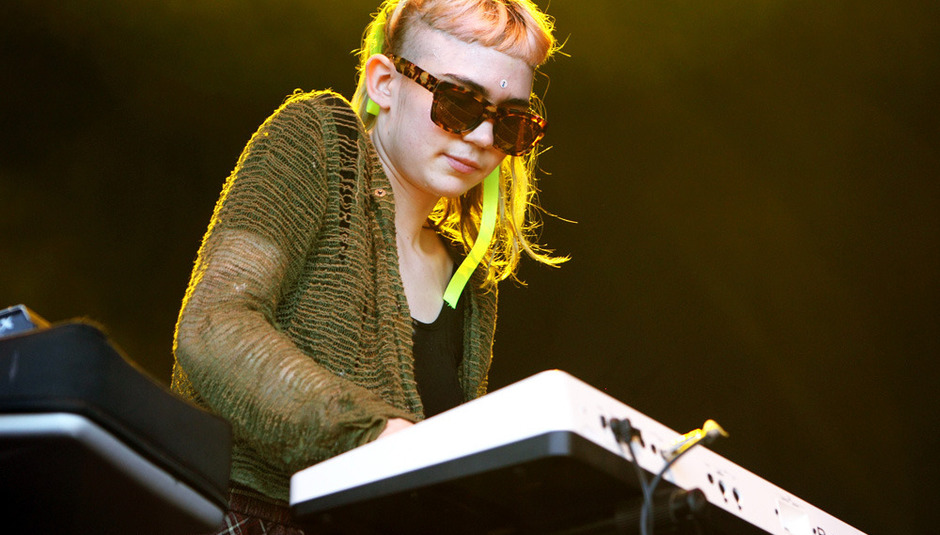 The 2012 edition of Primavera Sound went down the weekend before last in Barcelona, and it was, in a word, awesome. We’ll save thoughts on the festival itself (which this year expanded to a city-wide series of concerts and exhibitions) for our wrap-up of the event in Saturday’s report; until then, here is the first part of our coverage, featuring reviews of Grimes, Beirut, Refused, Danny Brown, Spiritualized and Catalonia’s own John Talabot, from writers Si Truss, James Skinner and snapper Burak Cingi. Thursday at Primavera Sound 2012, or: fuck you Refused, for making everything else seem like shit.

When Claire Boucher bounds out to greet the mass assembled down on the Pitchfork Stage it is to resounding applause. “I think this is the biggest show I’ve played in my life,” she tells the crowd, to more applause, before technical problems ensue: she’s gone and back again a few times before the show really gets underway. I guess how you feel about Grimes revolves around whether or not you’re one for her sugary, ethereal vocals, but it’s hard not to be swayed by her enthusiasm onstage. Replete with a luminous ribbon in her hair, she’s all flailing limbs and easy energy; the crowd loves her for it, and it’s clear that after a touch-and-go start she’s having a ball up there.

In fact, I can’t tell whether the wilfully amateur ‘dancers’ that soon join her detract from the whole thing or not. I mean, it isn’t a small stage, and she does look kind of slight up there, but when her songs really take off (and that’s when their pop core is most readily apparent; it’s no real surprise that ‘Oblivion’ and the closing ‘Genesis’ draw the heftiest applause), she makes for a plenty endearing presence all on her own. (JS)

The thing that strikes me watching Beirut is how all it takes is a few bars of each intro and groups of people around me are swooning, eyes closed, lost in their own private reveries. It is warming to see how so many of these songs are so many different people’s favourites, and though the sextet starts out slow, double bass way high in the mix and Zach Condon’s stage banter painfully stilted, when he starts to loosen up the crowd palpably does so with him.

The Lon Gisland EP gets, I think, a full airing over the set (brief interlude ‘The Long Island Sound’ is particularly gorgeous), but it is otherwise spread pretty evenly over the band’s discography. Songs like ‘Nantes’, ‘A Sunday Smile’ and ‘Postcards from Italy’ feel like stone-cold classics at this point – indeed, I think the young lady next to me has a heart attack when the latter’s distinctive ukulele strums herald its arrival – and newer tunes like ‘East Harlem’ and ‘Port of Call’, even if they don’t quite conjure up that Balkan or chanson magic of old, slot right in alongside them. The biggest surprise of the set comes via a sparky run through electro-pop number ‘My Night with the Prostitute from Marseille’, while ‘Carousels’ closes proceedings to outbreaks of ballroom dancing among the audience, Condon breaking out into an enormous smile as he bids us goodnight. (JS)

Well. Tonight Refused are momentous. They are: ferocious, incendiary, visceral. Dennis Lyxzén is a force of nature, and the band kicks, snarls and thrashes around him in a blaze of angular fury the likes of which I have rarely, if ever seen. While it might feel strange to say this about a politically charged hardcore punk band that burnt itself out nearly 15 years ago, this is a show, a genuine spectacle, and perhaps the most enthralling thing I’ve seen in three years of coming to Primavera Sound.

Backing up a little, the wiry, caterwauling Lyxzén doesn’t say much to start with, offering a simple “We’re Refused from Sweden,” after an opening salvo that culminates in a crushing rendition of ‘Liberation Frequency’. But as the band hits its groove he opens up to the increasingly massive crowd, countering their controversial decision to reform with the assertion that, 15 years later and in the face of a crumbling Europe, ineffectual foreign policy and innumerable financial crises, these fiery slices of noise and melody mean more than ever. But it’s not all about Lyxzén, or even the politics, however intrinsically tied up in this band they might be. Watching Refused as a unit is thrilling, and the ranging, adventurous musicality that lit up its 1998 swansong The Shape of Punk to Come is as plain to see as the anger that drives it; if Lyxzén is a captivating focal point (indeed he winds up shirtless, supine and ragged before the set is through), then his bandmates put in sterling work around him throughout. After a splintering, corrosive run through that album’s title track the band leaves the stage amid shards of feedback, and that could reasonably be it.

Yet they re-emerge, eventually bowing out by way of ‘Tannhäuser / Derivè’, buoyed by their spectators’ part in the rallying cry “Boredom won’t get me tonight.” It is colossal, exhilarating; segment piled atop segment, riff atop skyscraping riff. A group bow, an exit, the oddly fitting strains of ‘I Shall Be Released’ through the PA (for a few seconds, anyway), and that really is it.

I swear, the longer I spend listening to, and writing about music, the worse I get at estimating how big any band or artist actually is. Case in point: Danny Brown. Arguably the most interesting of the wave of leftfield-leaning, blog-friendly rap artists that has emerged from the US over the past 18 months – pre-Primavera I would have had him down as at least a fairly big draw. Yet we turn up to the Pitchfork Stage just after midnight to find that only us and about ten other people (slight exaggeration for effect) have bothered to come see him play. Then again, Brown does have the unenviable task of going head-to-head with the newly reformed Refused, and a triumphant return from the xx, which might account for the lack of bodies in the crowd.

Either way, it’s probably for this reason that Brown’s set lasts barely more than 20 minutes. That’s not to say he’s unenthusiastic while he is on stage; surprisingly perhaps, for a man whose music consist largely of lines about selling drugs and often unsettling sexual imagery, expressed in a voice that I’d affectionately describe as ‘relatively unpleasant’, Brown is a consummate professional, witty and engaging throughout, easily one of the most likeable figures in modern hiphop. It’s just unfortunate that his set feels like it ends just as it’s getting going, with Brown leading the audience in an unruly chant of “I smoke blunt, after blunt, after blunt” (for the record, I don’t, but in the moment it’s enough to make me wish I shared Brown’s enthusiasm for them). (ST)

So, Refused were pretty good then. In fact, they were so good that, although Franz Ferdinand sounds great (‘Darts of Pleasure’ and all), it also sounds a bit weak, whereas A$AP Rocky, faced with a largely baffled crowd, just sounds a bit shit. Eventually I arrive way out at the Mini stage on the other side of the Parc del Fòrum just in time for the opening strains of Spiritualized’s gargantuan recent single ‘Hey Jane’. Somewhat dazed I set myself down, and am soon witness to an English guy loudly telling anyone around him who’ll listen that 'the problem' with Spiritualized is that 'they never play any of the good stuff.'

From where I’m sitting, these songs of regret, of Jesus and sorrow and addiction and, sometimes, of hope too, sound just about perfect. The band plays to a smaller crowd than Beirut entertained earlier, but it is nearly 2.45 in the morning, and when I rise from my (now lying) position, it seems that plenty are in agreement. I suddenly get the notion that I want to see Jason Pierce up close and rally towards the front of the stage, and within seconds the opening refrain of ‘Ladies and Gentlemen We Are Floating in Space’ kicks in, and there’s no way to get to the front because in fact there are so many people here, and Spiritualized, with two gospel singers and an incredible drummer and amazing lightshow and Jason Pierce hunched over at the side of the stage as is custom, is incredible.

The band finishes, later, with an explosive ‘Come Together’, and I don’t think Pierce has said a word to his audience all night. He flings his guitar to the ground as he storms offstage, the first to go. That guy from before? Fuck that guy. (JS) Whoever decided to have the Field and John Talabot – two purveyors of excellent melodic dance music – playing on different stages at the exact same time needs a thorough talking to. We opt to catch the latter; given that his recent debut LP fin is one of the standouts of the year so far, this being his first ever live show and that Primavera is close to home turf for the Catalan producer, it all adds up as too good an opportunity to miss. Fortunately, Talabot doesn’t disappoint.

He’s joined onstage by regular collaborator Pional to perform as a duo – surrounded by samplers, percussion pads and microphones – they make full use of the Ray-Ban Stage’s powerful sound system (one of the best I’ve ever heard at an outdoor festival, incidentally) as they run through the bulk of Talabot’s aforementioned debut. Live, the summer-friendly, Balearic-tinged tones of his brand of melodic house come to the forefront – unexpectedly, the live set occasionally brings to mind fellow Spaniards Delorean – but the soulful basslines and lovely intricacies of Talabot’s music that keep things flowing nicely and stop it all getting a bit too ‘big room’ deep house. (ST)