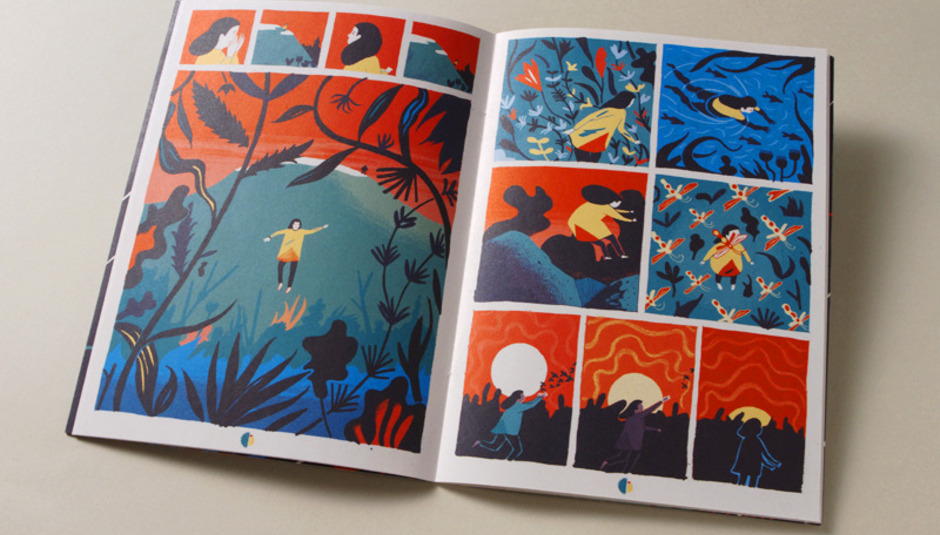 Young Colossus is the new project from Maccabees frontman, Orlando Weeks. It's a concept album made up of six tracks, with each one relating to a different section of the accompanying graphic novel, illustrated by artist Rob Hunter. It also features the vocals of Alessi Laurent-Marke (Alessi's Ark).

You couldn't really call it a solo album, although it is definitely Orlando’s project, he says that it was more a chance for him to explore a different vocal style to the one with which he employs in The Maccabees. Third album, Given to the Wild, is the most ethereal Maccabees offering to date; Young Colossus takes those otherworldly atmospherics a notch higher. Or is that lower...? It’s all very sensual, very spooky – opening track 'Franky' sounds out and out haunted.

Really, it's the story of Orlando finding a new voice - almost accidentally - and then finding a way to share that with the world. Everything starts as an experiment:

That character is the Young Colossus, and the album and accompanying artwork tell his tale. It was inspired by rites-of-passage, youthful classics like Labyrinth, The Jungle Book, Never Ending Story and even Peter Pan. But it's all rather abstract, and feels far too playful to have something as serious as a moral, or too tight a structure - a beginning, middle or end. It is very much a creative splurge, a chance to vocally kick-out in different directions:

“The book’s about the experience of the Young Colossus. It's not even as specific as a coming-of-age story, it’s just that all the things I love watching seem to touch on those things. “It was so lucky. The story really just evolved when we started recording and trying to do proper versions of the demos that I’d made, and trying to choose the strongest songs, and those that were relevant to each other. And I was very happy to just go with that.”

It's highly coincidental that it happened at all – at least in the graphic novel format. Had Orlando not stumbled upon Rob's book, The New Ghost, it might have gone in a very different direction:

“They were songs that felt like they had a story..ish. I didn’t know whether I wanted them to be film or animation or shadow puppets. But it was always going to have some narrative form. As soon as the characters established themselves, it became pretty clear that would help explain the tracks.”

Orlando studied illustration at university and has worked on album artwork projects himself (notably Florence and the Machine’s Lungs) and says that one of the bonuses of working in a creative industry like music is the opportunity for cross-over – that the education he got “wasn’t completely wasted.” And Rob was able to take Orlando’s rough storyboard ideas – literally scribbled onto lined paper – and give them form – to turn his thoughts into something tangible. “I knew that Rob would be able to take it to the nicest place. He’s got an incredible eye, a really nice illustrative touch, which is quite rare. It just felt exactly right, it was very lucky.”

Luck again: experimentation and playfulness were a big part of the process. Producer Nic Nell is with us and says that the project provided lots of excuses to explore, and to have fun doing it. In fact, the f-word seems to have been a major motivator behind the music:

“I think my favourite voice is the low-pitched voice, and it was pretty fun to be, like, ‘that’s the shadow monster - yes!’ I kind of thought of it as the Easter Island statue heads singing; that sounds fun, let’s get that on the record.

“There's this bit in 'Sleeper'... I can't help but smile every time I hear it. It’s just so fun. An excuse to get to do that is pretty good.”

Indeed, when Orlando and Nic talk, you can tell that they really enjoyed making this together. Having a long history, knowing each other since their art foundation course, they could push each other. And Young Colossus has clearly benefited from this almost brotherly relationship:

“I couldn’t have done any of this without Nic, because Nic was able to see through some very unrealised ideas and help me make them into the final thing. And that was playful at times, and also was a lot of hard work at other times.”

”We'd spend however long recording the guitar parts, and getting the whole take in, and then getting to the end of that and Orlando breaking out, 'Great....now can we make this sound like an organ recorded under water?' And just being like...'yeah?' ”

Orlando gives a lot of credit to his collaborators, and has obviously enjoyed the process: “All the way through I was able to throw out these rough things, and someone with the energy and patience was able to fully realise them. I mean, what an amazing opportunity.”

It was another bit of serendipity that bought Alessi's Ark into the little clan of collaborators: “I remember ages and ages ago, before this was even a twinkle in anyone's eye, our old tour manager had toured with Allessi, and played me some stuff. I'd heard this one song, and I kept coming back to it and thinking how brilliant it was and how extraordinary her voice was. And so we managed to phone Alessi, and she came down - she was incredible.”

Already an established angel of the ethereal, Alessi's vocals sit seamlessly with Orlando's new sound. Nic's going to be doing more stuff with her, and Orlando says he wants to keep Rob around. So, it seems the whole project has been fruitful for everyone involved.

And those that consume the fruits of their labour – the listener, the reader – will find it's a delightful little finished product. Right down to choosing the 'black wires' with the printer (the boys are pleased be able to tell me the industry term for staples), a lot of love has gone into it. You reap what you sow and Orlando and Nic have likewise been delighted to receive emails from all corners of the globe with pictures of people with their copy of 'Young Colossus'. Perhaps because its even happening was so unlikely.

Nic smiles and notes how nice it is to see one in real life when he spots the book in my bag as I pack up - “it was fun even getting to pop down and see the printing. It's like watching a record get pressed”.

They’re proud of it, they’re excited by it - which means you can be excited by it too. What started as a microphone in a Macbook has turned into something that is both a beautiful object and a very touching album. Chance provided the opportunity, and the effort of everyone involved has created something special:

“It's a very lucky thing to have been able to work with the people I've worked with, and to have made something that's just a really nice thing to have. I think, if I wasn't involved in it, I'd be interested in it – that's all you can do.”

Young Colossus is out now. Digital copies are available to purchase here.