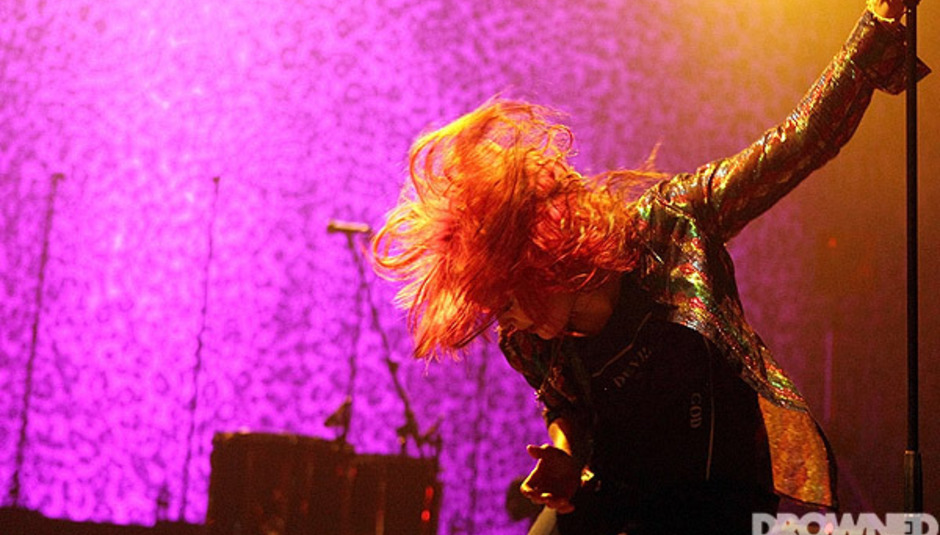 Wendy Roby is too busy opening all of your valentine’s cards to do the singles this week, so you’re left with me and my misery...^

The Kills ‘The Last Goodbye’ This weekend - the one just gone - Alison and Jamie aka VV and Hotel, celebrated ten years of being The Kills. To do so they played a show in New York, the city which seems to crawl from their pores, even tho most of what they've done gestated in a petri-dish known as South London. Whatever you think about the grungy-disco-fi duo, it really is quite something for the pair to have stared so stubborning into the future and come out the other end of a decade with little more than some smudged make-up and a somewhat famous wifey. Sure, rather than smelling of roses there’s probably more of a whiff of whisky on aged leather and a subtle hint of fags in the air but then you can’t quite imagine the pair of ‘em having it any other way. They've conquered all the world's major cities (their last London show was headlining Brixton Academy) but for some reason it doesn't seem like they've quite won over the world. I don't really understand why they've stalled with the fashionista's and the more dedicated fans of music because despite having the hooks and The Look to excite hordes of hormones in Ramones t-shirts bought from H&M, they seem to be considered by many in the biz as merely a solid band with a decent career, which is quite frankly bonkers. They should be at least as celebrated as The White Stripes but then maybe the decision to not compromise their creativity by lingering in the past and that desire to create something which has the thrum of the future whizzing through it hasn't helped them as much as it coulda done in this instra-filtered Retromania-obsessed world of distressed jeans we're living in.

We’ve not had a memo decreeing that The Kills are calling it a day so we’ll presume ‘The Last Goodbye’ is not a literal parting shot (but the idea of them going did have me a bit don't-know-what-you've-got-til-tis-gorn just then). Instead, it’s further evidence of what cracking aim they’ve got. This is one of their toned right down ballads - even moreso than 'Black Balloon' - and it sort of sucks you into the vortex you find in that space between the broken shards of a heart. 'The Last Goodbye' goes straight for that woozy little corner in my heart, stirrin’ a sleeping Lou Reed by rubbing its leopard print slippers in all the right places. Y’know, the places only Sparklehorse or Ed Harcourt or Tom Waits or some sort of grainy ol’ crooner from back in them so-good-they-named-it-twice days can usually touch. It’s a superb under-stated song which shows off what a great voice Alison Mosshart has ifyousomehowhadntnoticed. This double underlines the fact The Kills are an act who should be far more treasured and revered than they currently seem to be. Oh, and I should probably mention the rest of the EP is really ruddy lovely too...

Here they is doing this song on Letterman:

I didn’t know Emmy the Great had Bright Eyes-loving Scandinavian cousins with a slight American twang to their folksy twee. I didn’t know Kimya Dawson and all that Moldy Peachiness had infected the smiley carefree young folks out in them snow-capped fjords but my oh my does it seem like they have. The title is obviously a reference to Emmylou Harris and the song itself uses various relationships of 'rock' royalty like Johnny Cash and June Carter to speak to their lover... and oh-my does it make me wanna stroll on down to the nearest barn dance and hoick my childhood sweetheart into my arms and whisper this sweet, sweet, sweet chorus. Or maybe just post it on her Facebook wall to show that despite the top bants, if you look deep into my soul I’m a sensitive lad really...

A Place to Bury Strangers ‘Onwards To The Wall’ (EP)

For a few afternoons last summer I really got into Cold Cave’s crash-crash-CRASHING lashes of noize. They took me back to a time when I was obsessed with Icarus Line, and to summers before that when I loved Pitchshifter and bands like the Descendants who played a trillion times faster than I even knew was possible. In many ways, with their shoegaze-gone-REALLY-LOUD, A Place to Bury Strangers should be my favourite band (Dom Gourlay constantly informs me they’re one of the greatest live bands in the world) but it’s such an onslaught and I’m just not sure this was the right place to begin our noize-gaze affair. It’s very good tho, if you like that BAHBABABABABABAAAAHHH-TSK-TSH-TSSSSHHH thing with lots of wobbly guitars and a dude's voice in a pit of reverb talking in enchantments about Armageddon or something... the title track with the lady singing is rather lush indeed.

Screw your face up. A little tighter than that. Squish your lips so tight that they open of their own accord. Now, start shouting football terrace wuh-wuh-WOAHS in the style of The Futureheads/Vic’n’Bob. Now, imagine you’re in a forest and that bugs are crawling all over you. Some ugly creepy crawlies are trying to get up your nostrils and as you continue to uh-uh-OH they fill your mouth, Now, gurn. No, not like that, really GURN...... I love M83, and I’ve even learned to love Hurry Up, We’re Dreaming as it has some good tracks but this, sadly, isn’t one of them. I’m sure Maroon5 loving Proper Lads watching them goals in slo-mo love it but this just isn’t the M83 I signed up for. ...no! Wait! Wait! Wait Anthony, please comeback, our love is not over...

That moment when you switch the volume on and there’s an unholy racket blaring from your laptop but can’t work out which Firefox tab Atari Teenage Riot’s playing in while you try to listen to some sweet little ditty by Au Revoir Simone...

Rusko ‘Somebody to Love’

That moment when you want to climb inside the speaker and start giving an elocution lesson... That moment when you start to worry that dubstep really has succumb to cynical valentine’s singles already. It's probably just a coincidence this came out this week, yeah?

This is what I like to call Wendy Roby doo-wop-pop. It’s got a cutesy swing to it but I’d rather it just crawled back into the Belle & Sebastian cardigan from whence it came (Sorry Wendy!)

Did you read that report about what Chris Brown actually did for 40mins to Rihanna? Please note: that link is not for the faint of heart. Meanwhile, this song (and its spot-the-difference remixes) sort of wafts along and I can't really tell you much about it apart from it's making me want to listen to Ellen Allien and Kate Wax.

Honour Before Glory The Maison EP

This should be far higher up but Whiskas, once of iForward Russia! [fame] is an old friend of DiS' so it probably isn't right for me to pass judgement (I rather like it!), have a listen and leave your marks out of ten below if you so wish...

Also Out In The Shops This Week

^ = Actually, Wendy is actually sickly. Send her a get well message via whichever medium you see fit.

Wendy will return next week...

"I think romance is mostly a memory o...