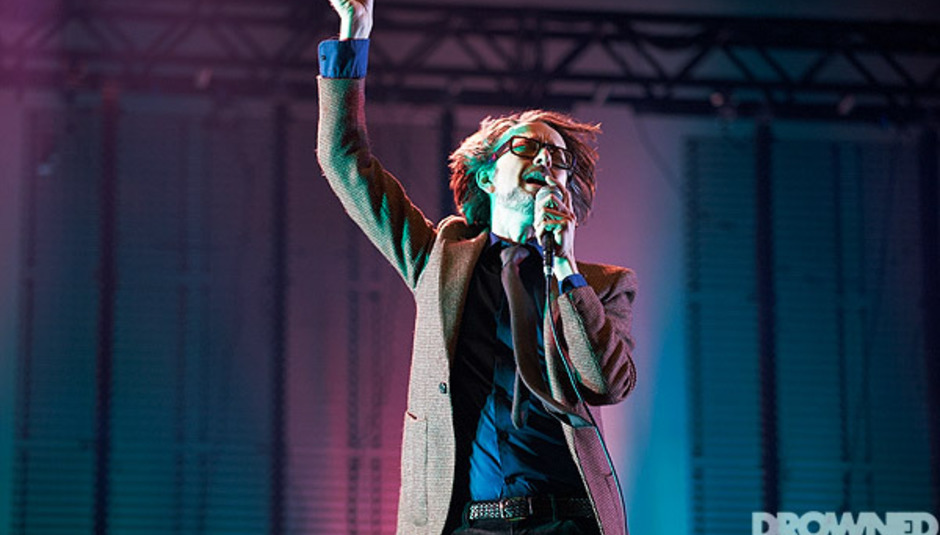 So, as 2011 draws to a close, it is that time of year again where what's left of one's memory goes into overdrive and lists get compiled accordingly. While the debate over this year's finest records continues, and believe me, there have literally been dozens. And yet, the one buzz that never subsides is that of a live show. The experience of seeing one's favourite artist(s) - or otherwise - in the flesh and remembering the exact moment Robert Smith forgot the timing during the intro to 'Boys Don't Cry' (not that it mattered, so special was that performance) or how that Sufjan Stevens chap appeared onstage alongside The National .

Having seen nearly one thousand bands throughout 2011, whittling this list down to just ten performances proved a nigh-on impossible task. However, after much deliberation and soul searching discussions with friends and acquaintances, here in no particular order (bar the first one, natch) are what I consider to be the finest ten performances these tired and weary eyes and ears have witnessed this year.

Having waited twenty years to see The Cure since the last time I had the pleasure of spending an hour and a half in the company of Robert Smith and co., to say their performance at Bestival didn't disappoint would be a distinct understatement. Astonishing, mindblowing, extraordinary. Just three superlatives that could be used to describe the marathon thirty-two song set that undoubtedly soundtracked the highlight of this year's festival season for me. While difficult - or should that be impossible? - to pick a setlist from such an extensive back catalogue that would suitably please everyone, the one which Smith put together for this particular Saturday night on the Isle of Wight was about as near perfection as one could possibly get. And then of course we had THAT encore. Twelve songs in total which ran from some of their biggest selling hit singles ('The Lovecats', 'Lullaby', 'Why Can't I Be You') to a selection of their earliest compositions ('10:15 Saturday Night', 'Killing An Arab', 'Grinding Halt') simply defied belief. Hell, Smith even cracked a few smiles and while the odd bum note and false start may have been thrown into the mix for good measure, only the most negatively altruistic of souls could fail to forgive him and his band having just been treated to one of the greatest live shows they're ever likely to see.

When it was announced at the back end of 2010 that Pulp would be returning to the live circuit for a round of festival appearances it's fair to say _we_ held our collective breaths in anticipation. I sang along with the common people at Primavera Sound and struggled for a space in the tiny Disco 2000, otherwise known as the Park Stage at Glastonbury. This, however, was where the stark realisation of just what a timeless, revelatory live experience Jarvis Cocker and his band can be. Returning to their Yorkshire roots, Pulp closed the Sunday night and weekend's festivities in such a fitting style it would simply have been wrong - or impossible - for any act to have followed them. Guest appearances by Richard Hawley, Jarvis' impeccably witty banter and a sublime setlist were just three of the highlights. But then, what more could one possibly want?

2010 will undoubtedly go down as The National's most successful year to date, culminating in a couple of nominations at this year's Brit Awards. Their ascension to Rock's Premier League imminent, the festival bookings came thick and fast, but none were as jaw-droppingly exquisite as this highlight from Barcelona's Primavera Sound in May. Sufjan Stevens unannounced guest slots on 'Terrible Love' and 'Afraid Of Everyone' couldn't detract from the real five stars of the show o stage, while Matt Berninger has blossomed into arguably the greatest frontman on the planet at this moment in time.

Another band that seem to go from strength to strength with every subsequent record are The Horrors. Having witnessed several of their shows this year, it's this one from the Festival Republic stage at Leeds Festival that stands out. Playing a set drawing exclusively from Skying and its predecessor Primary Colours, a powercut halfway through 'Still Life' threatened to curtail their evening. Cue several thousand audience members singing the song's refrain "When you wake up, you will find me" in unison. Five minutes later, the power restored, a near tearful Faris Badwan calls us the best crowd he's ever played to. The feeling was mutual.

A cold Tuesday night in December might not be the most idyllic time to watch bands, yet the astounding performances from both We Were Promised Jetpacks and Let's Buy Happiness earned them a late place in the Top 10 at the expense of several household names. While sophomore record In The Pit Of The Stomach seems to have been criminally ignored in many places, We Were Promised Jetpacks incendiary mix of songs from this and their previous record These Four Walls brought the house down at the Bodega last week. Brimming with confidence - breakthrough single 'Quiet Little Voices' tossed away at the beginning of the set while new single 'Human Error' never got an airing - they've unflinchingly grown into one of the UK's most potent live acts. Newcastle's Let's Buy Happiness deserve a hearty mention too, having warmed the room beforehand with their quirky folk pop that recalls The Sundays, The Pop Guns and on dub-infused closer 'Crooks', the sound of Los Campesinos! covering Fugazi's 'Waiting Room'.

OK, so I guess a few people will have noticed just how many of the artists that have made it into this list are on the reunion/reformation trail. While that's not meant as a slant on the bands of today, there can be little doubt that most of those who've embraced such a second coming opportunity have bowed to the wishes of their respective fan bases and delivered a wishlist set. Several of these happened at this year's Latitude Festival (Echo & The Bunnymen, OMD) but the one which really stood out was the rebirth of Suede. While not being the "classic" Bernard Butler era line-up, the setlist could not have been better orchestrated had the erstwhile guitarist been present, and the fact only two songs post-Coming Up made it into the set spoke volumes.

Having established themselves as one of the most innovative bands to emerge from these shores in decades, they can also add the descriptive "consistent" to their never ending list of plaudits. As in consistently brilliant. This show on the day of release for excellent third album Smother highlighted a band at their most creative, yet at the same time seemingly relaxed when placed in a live environment. The acoustics of the tiny Y Theatre only added to the momentous clamour served up by the likes of 'End Comes Too Soon' and 'Reach A Bit Further', while the playful exchanges between Tom Fleming and Hayden Thorpe are a sight to behold whatever the setting.

You kind of know something's going to be good when sizing up the prospective clientele in the boozer pre-gig. This was one of those moments. Having spent half an hour in the company of frontman Jaz Coleman beforehand listening to conspiracy theories ranging from the New World Order to Naomi Klein's The Shock Doctrine, returning to Rock City's basement bar found us in the presence of numerous old school industrial heads resplendent in Lydia Lunch and Neubaten t-shirts that obviously meant business. Thankfully, so did the band, and as a catalyst for a whole summer's worth of exciting Killing Joke performances, this ninety minute extravaganza set the ball rolling nicely.

Forgive me for seizing this opportunity to relive my teenage years, but this show from Andrew Eldritch and his current co-habitants as The Sisters Of Mercy was more than a nostalgia trip in many ways. Mixing material from every era of his band's chequered career, it felt more like a history lesson in the development of alternative guitar music. And as for those of you that missed this to watch Matt Cardle's backing band. Shame.

Sure, many who've closely followed the steady rise of Factory Floor these past twelve months may argue this wasn't a definitive performance by any stretch of the imagination. Whether that be the fault of the venue, or the scheduling, heavy Sponsorship or disintested segments of a crowd fuelled on cheap booze and free tickets is open to debate. One thing is for certain though, Factory Floor once again demonstrated why they're the most forward-thinking outfit currently treading the boards around the UK at this moment in time. Intense, captivating, and thoroughly enjoyable, the fact they've built up such a hardcore following through their live shows without national media coverage or (until recently) a record deal speaks volumes.

While these stood out as ten shows that defined 2011 for me, I'd like to sign off by mentioning a few others that narrowly missed out. The Antlers dazzling performance at Summer Sundae in August, Slayer reminding all and sundry why Reign In Blood is the greatest metal record of all time and Adam Ant rolling back the years in career defining style at Nottingham's Rock City only last week all would have featured heavily any other year. Here's to spending 2012 down the front!

DiScuss: Which shows stood out for you in 2011, and which artists are you looking forward to seeing in 2012?

"It's strange being compared to somet...