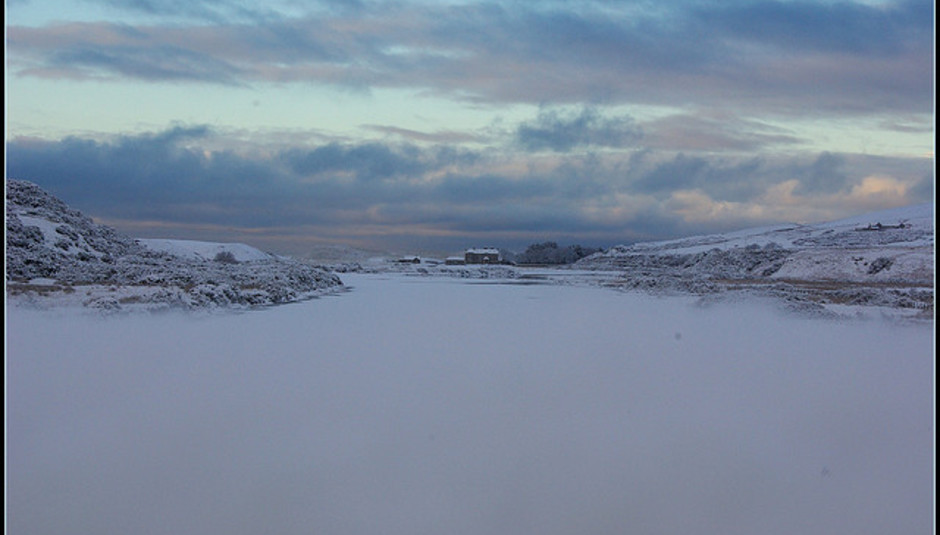 Hello hello. I'm having computer issues. My antiquated laptop seems to be sensing that we're trading it in for a new one come Christmas and is rejecting all notions of functionality. So, for the third time trying to post this... On that theme, this month there's a stocking-full of info from north of the border to catch up on, so let's get to it...

Electronic wizard, Miaoux Miaoux unveiled a preview of his new album at the Captain's Rest this week and what a preview it was. The first half of the evening saw Julian Corrie's standard soundscapes expanded upon with the help of a full all-star band - including Paul Carlin (Dananananaykroyd, American Men), Kris Ferguson (Mitchell Museum) and Anna Miles (Maple Leaves) and guest vocalist Profisee - fleshing out his synth/guitar to a thumpingly loud degree. But while their addition brings much to the table, when Corrie took things into his own hands for the second part of the set, things got even more speaker-shakingly exciting. If you like to dance, this is an album you'll want to be looking for when it appears, in the man himself's words, "at some point next year". For now here's something from the MM archives.

Now, tackling an important question: where next for the Scottish music industry? Well, the Scottish Music Industry Association has released a five year action plan, showing how its actions can provide “an overwhelming positive force for good”.

SMIA’s Board includes a host of professionals from the industry - Stewart Henderson (Chemikal Underground/The Delgados) and Mogwai’s Stuart Braithwaite number in its ranks.

The three strategies it has identified are: to celebrate and promote all musical endeavour in Scotland; stimulate growth and job-creation at local, regional, national and international levels; and communicate more effectively as an industry, internally and externally.

The basic aim is to help guide Scottish artists through the turbulent times we now live in, and strengthen the industry at the same time. Looking at the small print, their planned programme of events includes independent label record fairs – such as those successfully trialled earlier this year at the Edinburgh Festival and Glasgow’s Platform arts venue – a minimum of four seminar/panel events per year and a major training event each year. It also means taking control of the Scottish contingent to SXSW.

Over at Radar this month we announced the winner of this year’s Scotsman Radar Prize – Sebastian Dangerfield. If you haven’t heard them, the winning entry sounded a little like this:

You Played Your Part, Singer! by sdangerfield

‘You Played Your Part, Singer!’ is from the band’s ‘The Sound of the Old Machines’ EP which came out in April and is available on Bandcamp.

In Glasgow, we’ve been celebrating 20 Years of Sleaze – aka venue Nice’n’Sleazy’s birthday. This included the surprise reformation of Arab Strap for one night only, and for which I rather upsettingly missed out on getting tickets. I decided to look on it philosophically; going to see Arab Strap again would be like going back out with an old boyfriend – which as Arab Strap scholars know from ‘New Birds’ is not really that good an idea. But then I read Stuart McHugh’s review on Is This Music? and was gutted all over again.

The campaign to Save BBC Introducing in Scotland has raged on since last month, with organisers from Pelmet Nights and blogger The Pop Cop taking the fight to BBC Trustees at the broadcaster’s Scottish HQ. This was also the scene for a staged busk-in last weekend, where bands braved the notorious Glasgow weather to show their support. Pelmet Nights has now posted a video:

The petition, which has so far attracted 6,500 signatures, will be handed in on December 12.

Alert Santa - Happy Particles have announced they’re giving everyone the present of their album on Christmas Day. So you’ll have to tear yourself away from the turkey and make your way to your computer. Why should you leave the crackers, rum and stuffing behind for a few minutes? This track should give you some indication:

The six-piece are releasing the album themselves, and it will be available on their Bandcamp page for £5 only.

Also out recently or just about to be released:

Gerry Loves put out a re-issue of Wounded Knee's 'House Music' - first self-released by the artist himself on his own Krapp Tapes in 2010. There were also album releases from The Mirror Trap, The Stormy Seas and Bwani Junction.

Jonnie Common releases new remix album ‘Hair of the Dog’ on November 28 through Red Deer Club. It features remixes from his debut album ‘Master of None’ by the likes of Geese, Dems, FOUND, Ben Butler & Mousepad, GRNR, Miaoux Miaoux, the Japanese War Effort and more. A launch event takes place in Mono, Glasgow, on November 27 from 7.30pm.

Dead Boy Robotics’ self-titled debut is also out on November 28, with the band playing launch shows in Edinburgh on December 3 and Glasgow on December 11.

Song of Return’s new EP, ‘Trajectory’, will be out on December 5 and the band is hosting a launch night with Atlas Empire on November 27 at Nice’n’Sleazy.

The Gothenburg Address will launch their first single since the band was reincarnated, ‘The Hessian’ at Sneaky Pete’s, Edinburgh on December

December means it's Christmas party time - and there are a bunch of festive-themed shows to choose from.

There's a belter of a festival in Dundee on December 2. Book Yer Ane Fest is "three days of punk/emo/hardcore goodness" in aid of the Safe-Tay project. Check out the details here.

Gerry Loves Records' Christmas party night is also on December 2 at the Banshee Labyrinth in Edinburgh. It's a bumper line-up too, with Lady North, PAWS and Trapped in Kansas, plus it's also acting as a split cassette release party for Field Mouse and The Japanese War Effort.

Blogger Beard of Truth is putting on a 'Heavy Xmas Pop Party' with Pet, The Spook School, and Calypso Brown. It's on December 3 at the Wee Red bar, Edinburgh.

Aberdeen-based Bedford Records are having their Christmas Party at the Lemon Tree on December 16. IndianRedLopez are playing as part of a tour which also takes them to Falkirk's 20 Rocks on December 9 and Inverness Hootananny on December 17.

The Phantom Band are putting on a whole pantomime for the festive season, with a host of special guest bands at Stereo, Glasgow on December 16 and 17. I'd link to it but for some reason their website keeps making my computer crash. Possibly the power of these gigs is just that awesome. Possibly.

Glasgow Podcart are supporting the underdog by putting the least-well-known band on their lineup as the headliner for their Nightmare Before Christmas on December 18 at the Captain's Rest - so As In Bear take the top spot while support comes from PAWS, Citizens and Lady North, a killer combination. Podcart are also gearing up to release their 100th podcast in December - which is a pretty damn epic milestone.

A Quiet Night In are having their Mini Christmas Party with Make Sparks, Orphans, Scarlet Shift, Skippy Dyes and Verse Metrics, at Glasgow's Stereo on December 20.

Finally, a Hogmanay bash from Detour. They're taking Stanley Odd and Kitty the Lion up to the Old Bridge Inn in Aviemore to ring in the new year. Get in touch with them on Facebook for info on how to book.

Overlook Records are putting out the debut EP by Salo this month, so it seems the perfect time to introduce them. The band grew out of the ashes of The Ocean Fracture and No Kilter with a simple desire to be louder, crazier and more experimental than their previous outfits. What does that sound like? Yelpingly, complicatedly, danceably, screamingly good. Their press blurb mentions the likes of Fugazi and Drive Like Jehu for comparisons which is not a bad place to start in terms of musical style. Look out for the EP at the Overlook website after their launch show on December 7 at Bloc, Glasgow.

In Photos: Besnard Lakes @ The Scala,...