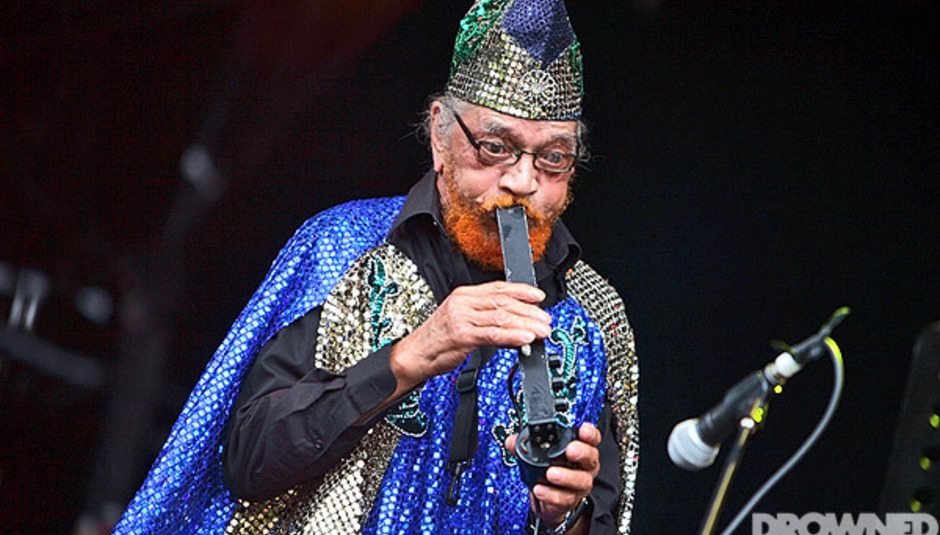 Since its inception in 2007, the Field Day festival has been beset by hitches. Consecutive years have been marred by problems with inaudible sound, extraordinary toilet queues, comic band cancellations (Dan Deacon losing his passport anyone?) combining with moronic last minute mass schedule alterations, or simply by being idiotically put on at the height of the English summer when the organisers should know it will piss it down. What promoters Eat Your Own Ears have got consistently right is the bill, with 2011 no exception. So, in spite all the above reservations, a line up of established names, ascendant stars and offbeat legends prove irresistible once again.

This may be the year with no designated headliner, but the day is packed with highlights, and by the time a godawful hangover and the vagaries of Hackney bus routes deliver DiS to Victoria Park the likes of Faust, Anika and Ducktails have already passed us by. Who can complain about being greeted by the Sun Ra Arkestra though? Nearly two decades after the passing of erstwhile leader Mr Ra, the ever regenerating group - whose age range now stretches from the 87 years of musical director Marshall Allen to accomplished pianist Fariz Abdul-Bari Barron’s twenty-something - play with an almighty flair. Sun Ra’s big band space jazz often verges on the utterly uncontrolled, and wafting outdoor sound does nothing to help its focus, but there is a supreme hand at work here. A pounding deconstruction of the 12 bar blues is followed joyously by the emblematic ‘Space is the Place’, which segues back and forth into a truncated ‘Nuclear War’ until finally Allen calls up an almighty electric storm on the EWI (a strange ‘electronic wind instrument’ claimed as his own invention). It’s outstanding entertainment, even without their sequined robes or multi-instrumentalist Knoel Scott’s audacious acrobatics.

After all that Darkstar’s set drifts moodily over in the Blogger’s Delight/Lanzarote/Dummy tent (how many names does each stage really need?), before Mount Kimbie take the reigns at the Laneway Festival Stage. The set starts ploddingly, with the duo bobbing away far more excitedly than their music. Soon they chuck their rhythms off kilter and smack them about with some shards of guitar noise to great effect. Things really look up once they dab flippant pulses of electro, clicks and spliced vocal samples all over the place, conducing the same excited reaction in the crowd they’d already delivered to themselves.

Over on the main stage Electrelane return to do their pretty indie thing with a set digging rigt through their back catalogue. There’s plenty of fun here, even if the band never quite feels like its filling this forum. A dash to The Quietus Village Mentality Stage for the mindbending locked grooves of Kinshasan amplified likembé orchestra Konono No.1 is a valid decision. Sure, they once again tour just as a trim six-piece, but the looping polyrhythms wrested from their rudimentary instruments are a non-stop delight. As soon as the electrified deep bass thumb piano thud drops they’ve sewn up outstanding performance of the day, even if the presence of beloved DiS associates John and Luke of The Quietus dancing on the side of the stage like the whitest men this side of Islington proves ever so slightly off-putting.

Back at the Eat Your Own Ears’ main stage, John Cale continues the interrogation of the song form he started back in the Sixties with The Velvet Underground. His solo output has never gained the recognition of former colleague and sometime rival Lou Reed’s, but there is work of its equal right across the idiosyncratic crannies and crevices of his recordings. The electric staccato he envelops his songs with today may not be their finest incarnation, but Cale’s determination ever to reinterpret his music marks him out as a true artist. Another - Omar Souleyman - seems to have developed a universal language back at Village Mentality, with the crowd united by the rhythm and sound of the Syrian dance music dabke. Ice cool as ever in aviators and Arabic dress, Souleyman seems pleased by the crowd surfers and pogoing swathes, while musical mainman Rizan Sa'id enduces mass euphoria with his synth drones. Their homeland may be in crisis, but their music is at a constant peak.

So far, so good, but this is Field Day and the edges are starting to fray. In the Bugged Out! tent, Kieran Hebden and James Holden are holding forth head to head, Hebden trading typically organic lines of melody and pin sharp beats to neatly corrupt Holden’s more upright rhythmical selections. But it’s all getting a bit rammed. With twats. Lots and lots of twats. What’s the collective noun here? An eyesore of arseholes? A Shoreditch of cunts? The bladder of hipster wreckheads seem less than intent on listening to the music (and, to be fair, the sound does suck) but more than happy to batter into anyone from all angles. A sudden deluge and the place fills to the brim; going out into what turns out to be relatively light drizzle proves the least unpleasant option. Jamie XX is equally overstuffed, as his band has been here before, but The Sea and Cake are busy being light and jolly to a polite crowd over at Village Mentality. We head to Laneway where James Blake is taking his time setting up, the overwrought white noise of his sound check hardly lightening the mood. When he finally gets going it’s probably worth it - after all what would be the point of his set with out that sound? His music may be an experiment in just how low you can go - itself a valid question - but that sub bass is nonetheless aligned to some stellar songwriting.

Factory Floor fill the small space of the Shacklewell Arms/Lock Tavern tent, both with an eager crowd and a voluminous noise. The fact it is barely possible to catch a glimpse of any one of them throughout doesn’t really matter: their music seems to negate any notion of authorship, its mechanistic nature nurturing a robotic image. The confines restrict the set from catching fire quite as they did a few weeks prior at I’ll Be Your Mirror, but the band gradually build momentum with slanging guitar slashing those unstoppable industrial edifices. The band is still, incredibly, without a label - surely its time Mute did the decent thing.

With Carl Craig closing the night, braving Bugged Out! seems once again a necessity. No doubt it depends where you stood, but on the margins the intricate constructions of his beats flutter weakly into the cold night sky. Pushing any closer is simply not on the agenda, so, as Wild Beasts’ delicate dream pop plays out on the main stage, Field Day stumbles to a close, its reputation, well, precisely intact.

And London is burning.