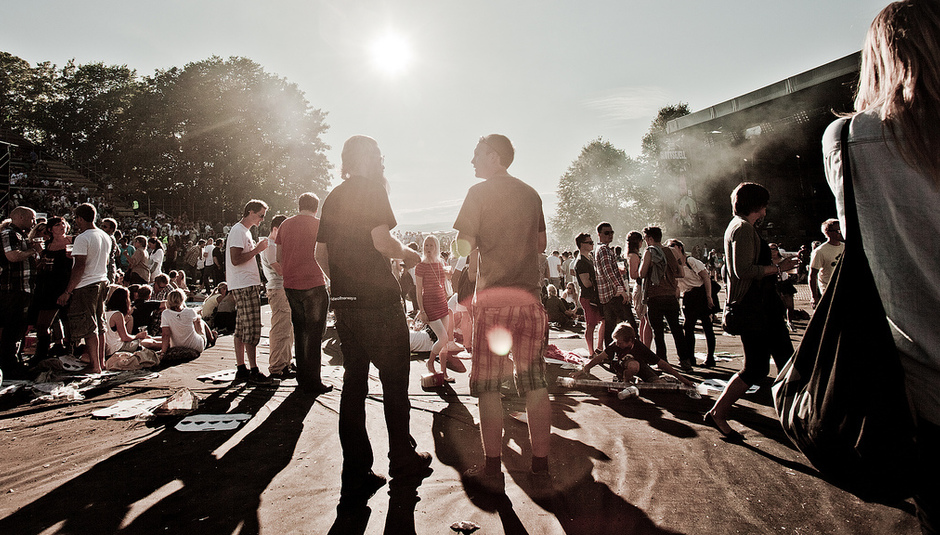 It did at one time over the past couple of days, seem trivial to be reflecting on a such a superb weekend at one of the most brilliant festivals I've been to, in a country I love. But, on reflection, it is anything but trivial.

Slottsfjell takes place in Tønsberg, a medium-sized town on the west side of the Oslofjord. As a festival it is partly comparable and partly incomparable to anything in the UK, but on the whole more leaning towards incomparable. A festival is about music, naturally, but what makes a festival is often not the greatness of the line-up or performances alone. People and atmosphere are a huge part and you'll be hard-pushed to find a better bunch to party with than the Norwegians. People do drink, but rarely become lairey. Of course, it'd be unacceptable to do it in front of the kids and there is a definite family feel to parts of this festival. And the best part of all is that you get to stop being so British, and stop apologising for rubbing shoulders with anyone and...y'know, neck a few pølser.

We decamp our lodgings on a former military island (it sounds grim – it wasn't) 45 minutes boat-ride outside of Tønsberg to arrive at the festival site, a place where everything seems remarkably close together because, well, it is. The NRK Urørt stage for "untouched" bands is essentially a stage in someone's back garden, and a well manicured garden dashed with flora and fauna at that. The main stage, Kongescenen, is of standard festival size and appearance but fronted by a felt-floored semi-ampitheatre slope complete with giant stadium terrace at the very far back. Directly next to it is the Baglerscene, and more thick grass around it, located for convinience.

The first band on offer on this stage are New York hardcore lot Cerebral Ballzy who, with a name as they have, are duty bound to be a bit raucous – and they are, but not without fault. Most tracks are about pizza, drugs or skateboarding and occasionally all three. Oh, and truancy. It's 2:30 in the afternoon and few people are here to witness their ball of speedy punk but their rumbling basslines are undeniably great. They are fun. It might make you want to hit things, but it is also a bit nonplussing. With this, the alcohol intake is increased, as is a desire for pizza.

A remarkable thing is that, before coming here, I hadn't been to a festival with an upstairs section. That changed at Slottsfjell, obviously. Go up a relatively challenging set of stairs (difficulty 4/10) and if you haven't lost your breath in doing so, you will when you see the sight that greets you. Yes, it is breathtaking (see here for my own evening photo). Plus, there's another two stages and a caravan-type thing where more music happens. Among the bunting and plastic picnic tables, there is goodness to be found.

Part of that is Razika, who are kind of cute and kind of good without being excessively so on either count. The crowd at Tårnlunden – the smallest proper stage – demonstrates their recent rise in popularity, with little room to breathe, let alone move. Nearly every song gets a reasonable cheer, none more so than 'Vondt I Hjertet'. If their punky-ska leanings have an ultimate highpoint it's this chirpy one which, even in Norwegian, is catchy and includes some impressive finger-picked bass, which is always an attractive quality in any human being. You can dance to this, too.

Further along the top of the hill at the Kastellscene are Deerhunter who, for all their excellence and variety, seem to lack just something this evening. It all feels a bit limp. Perhaps they were blinded by the setting sun – it is at a transcendental level of beauty when they play – but they also certainly weren't helped by bass-heaviness, despite the self-evident brilliance in depth of their catalogue and actually the selection of tracks they choose here, despite the presence of an excellently extended 'Revival'.

One of the most exciting bands to emerge from (or more accurately, kick and scream their way out of) Oslo in the past year or so are Deathcrush, whose noise-rock is aggresive if not totally brutal and confrontational if not totally intimidating, although occasionally it is all of those things. Tonight it is not quite as much flat-out fun as when there is a threat of getting headbutted or something like a guitar in the face but it's still up there as a rollickingly chaotic time, as usual. Still, despite all of the antics up front I find myself more and more transfixed by the drumming.

There is a lot of amazing, challenging, groundbreaking and enjoyable music occuring in Norway right now. It stretches a range of genres wider than the Oslofjord. However, one thing I will never begin to understand is the American country-ish vibes exhibited by bands such as Mhoo, who were pleasant and proficient enough. I mean, I even actually thought they were a fine choice for the early afternoon family crowd. But it still baffles me, a bit. However, judging by the facial expressions around me, that is my problem, not anyone else's.

The rain comes on Friday, as has to be expected in a Norwegian summer, but it is not heavy and nor does it create any mud, just a slight dampness and reluctance to sprawl on the grass as you might want to do normally. Not that you'd want to sit down for Rolo Tomassi, who seem quite pleased to be here, as well they might. It's doesn't feel intense from in front of the stage, but it is exactly that on it, as Eva snakes around, screaming totally uninhibited. The crowd grows as their performance does, giving the locals a taste of good ol' English noise at close to its finest.

To many people, myself included, Biffy Clyro are seen as band whose best days are past them. I wasn't expecting much but, amidst the drizzle they dazzle, reminding me and hopefully alerting others that their ouevre is actually fairly impressive, even if there may never a good time to listen to 'Machines'. Ever. Again. Likewise, The Go! Team, who have arguably steadily declined. Or at least I thought so. Wrong again. Despite their constant proclamations about how hard the festival's name was to pronounce, they almost manage to lift the clouds a few metres higher with stomping energy and a little bit of (reluctant) crowd participation. Did they always have two drummers?

Grinderman are also here and that means that the Nick Cave and Warren Ellis spotting goes into overdrive. Sadly, we have to wait til they get on stage, but even then you feel like you're at arm's-length to the great man and his crew. Of, course, 'No Pussy Blues' has the greatest roar of approval but it was 'Bellringer Blues' which brought out the best, with the “tippy TOE, tippy TOE” lines an absolute highlight of existence, for an hour or so afterwards at least. “There's something wrong with our bass player”, claims Nick Cave before an encore is delivered. There was, but there was little wrong with the others. Mesmerising stuff.

The sun once again shines, perhaps even harder, on the final day of the festival. Working up a sweat for Harrys Gym (no apostrophe) isn't such a problem, as their dazey and hazy shoegazy jams emenate from the Kongescene. In the afternoon heat it is something to absorb, as opposed to any kind of dancing or flailing of limbs you might be tempted by, and absorb you do, closing the eyes, nodding in approval.

The restraint retires once Erasure appear, though. Andy Bell looks like the happiest man in all of Christendom as he gurns, shuffles, dances and sings his way through Erasure's wide array of perfectly formed pop songs. He grins hard. He sings hard. Vince Clarke is Vince Clarke and all is good with the world, at least in this little bubble of joy which continues to encase me during Mudhoney's age-defying set. It's not often here that people go completely wild and roll around on the grass, fist pump the air unless absolutely necessary, but c'mon, it's Mudhoney! They've got the hits! And they play them. Hard! The Money Will Roll Right In. Touch Me I'm Sick. Sweet Young Thing Ain't Sweet No More. Hate The Police. It's almost endless. But it does end. But will Mark Arm ever end? I think and hope not.

Back to that sunset. Again. The natural beauty of a Norwegian Summer sunset is hard to rival and yet again the landscape surrounding the Kastellscene delivers in time for Mogwai's appearance. The two events happen separately but are intertwined and such, lying on an incline staring out over hill and water, occasionally arching your neck back to peer at the tower, the band and fluttering flags becomes an emotional experience. No more so than during 'Hunted By A Freak', which gives me a few minutes of total clarity as to how phenomenal Mogwai actually are. And how sometimes a melding of nature and music cannot be bettered. And how sometimes...there are just no words.

It is downhill in many aspects of the word from this point, as we stumble out of site to see what the Tønsberg nightlife has to offer us. As it happens, it's much more of the same, and that same is something to be happy with, wandering around a town generally having an exceptional time. It's probably Slottsfjell which put them in such a good mood.

Main photo by Kim Erlandsen for NRK P3. All others by Carina Jirsch