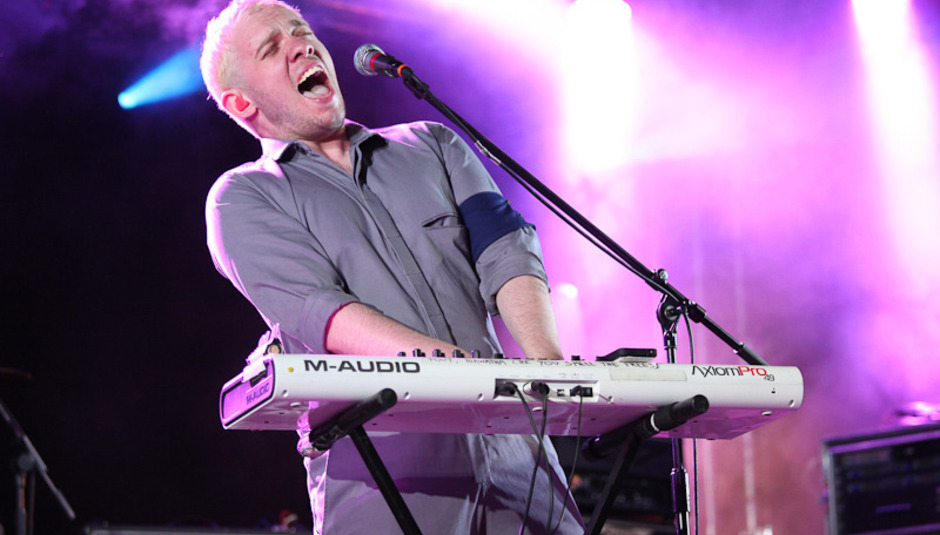 As ‘Urinelle’ ranks alongside ‘Moon Cup’ for sheer mind-wanging, vocabularic heinousness; and though I object strongly to the suffix ‘elle’ or the prefix ‘she’ being added to anything regarding ladies’ effluent, by Sunday it is clear: if you wish to lift your spirits, you need only join the queue for the girls wee troughs. Armed with what looks like a small chip cone, I find myself in a cubicle, desperately trying to remember where I last saw my dignity. Then a girl of about sixteen sticks her head round the side of the adjacent stall.

‘Oh my God. I am SOOOOOO. SORRRRRY.’ She says, trying to make amends.

Now, it is deeply troubling to find that the sense of humour you developed aged twelve is the one you are stuck with for the rest of your life, but one must accept these things. And a girl trying to do a pinky shake with you over the sound of other girls giggling because they have just done a wee on theyselves, is funny. That morning, and in the distance, I hear Scala & Kolancy Brothers’ choir of younglings sounding magnificent, and doing a rousing, angelic take on Peter Gabriel’s ‘Solsbury Hill’. My wellies (now in a parlous condition) no longer trouble me. Besides, I am mid-way through securing some interview time with Everything Everything, who have kindly agreed to let me put a teenager in front of them. She will have a biscuit tin of questions along the lines of ‘What colour, is the inside of your mind?’.

Dog bless Everything Everything, whose day Sunday will be.

All this means I have to miss The Leisure Society, which pains me dreadfully, so I don’t really want to know how good they were. I also miss Anna Calvi, but that is on purpose because only one of her singles has worked on me. Still, as the sound she is making drifts to where my tent is, it is fair to say she is just right for Latitude; big on ambition and pleasing enough for some of its hipsterish Olds.

After taking my whippersnapper (brave, brilliant Millie) backstage to pester Alex and Michael out of Everything Everything (about which, might I say, they are very game), I go to see Gwilym Gold. Who plays an ancient, crumbling Rhodes organ and who has the sort of hair I feel all men should have nowadays; a halo of a quiff he spends a lot of time messing about with. At first I think his music is too slight, and with his eyes closed I wonder how easily he can see what bits of it are moving his audience - but towards the end of his set he ramps things up a notch; songs like ‘Everything Is Beautiful’ are rumblier and there is more static and it suits his crackly, electronic mood.

We catch short bursts of Clock Opera who feel a little too much like they are chart-chasing, sometime when you listen to them it feels as if they are trying to be all bands to all people. Which is not something you could say for Everything Everything. Oh, Everything Everything, who I fully expect to be a(n entirely brilliant, scattergun) mess. They are playing in the Word tent and it is properly, definitely rammed. And everyone knows the words, even though EE songs are notoriously hard to remember - ‘Chest pumped elegantly elephantine, southern hemisphere by Calvin Klein’ being a good example. And it feels as if the momentum they have always deserved is finally being poured onto their heads, and they have only their stagewear boilersuits to protect them. Jeremy says we are the biggest festival crowd ‘they have ever played to, truly, truly’ and they basically – and I hate this expression – nail it, all that complexity finally, fully and beautifully realised. There is a lot of jumping. And they do a new, as yet unnamed, song that sounds like Aha and is wonderful; instant, excessive and unrepentantly joyful, angular pop music. Everything Everything look very happy, and well they might. I emerge glowing.

I see not nearly enough of Ghostpoet - though I do hear The Single, ‘Survive It’, which sounds - if it were possible - more muscular, soporific and doomy, live. Then it starts to absolutely tip it down and our musical choices are informed less by personal taste, and more by practicality. So we sit on the floor of the Word tent and wait for OMD.

They begin by explaining how their set will not be dirgey new material, but ‘FIFTEEN SINGLES’, which I admire for its old school pop ambition. And shortly after, there is a lot of Rock Leg in the crowd, and a lot of grinning, unmistakeable synth lines making the soggiest of souls go disco. But I am determined to see just how ridiculous Glasvegas can be, and the rain lets off a bit, so we trudge to the main arena. There is almost nobody there… …but it will get better, because James Allan is saying he is about to bring on ‘one of the greatest artists of all time.’ And just as I am wondering who, out of David Bowie, Dylan or Patti Smith they are going to bring on, I hear some other words, which sound a lot like ‘Carl Barat’ and ‘Carl Barat’s wife’ who apparently (bad Glasvegas, very bad) is not worth actually naming. Which is when they proceed to slur their way through ‘Be My Baby’, all indulgence, and I write down LEAVE IT ALONE. Awful, absolutely shocking, it is. Strangely, I still admire Glasvegas for their bottomless, unembarrassable chutzpah.

Hurts are next, and though I have seen them before and rather enjoyed it, I will admit I am not expecting them to change my life. At first, nothing stirs, but as soon as they start doing 'Evelyn' - with its amusing ‘STAY with me, EVELYN! Don’t LEAVE ME with the MEDICIIIINE’ refrain - I find myself shouting ‘DRAAAAAAMAAAAA!’ and thoroughly enjoying myself. There are white roses on Adam’s piano and Theo out of Hurts pretends to get all aggy and smashes his microphone stand against the stage – although his rage would be a bit more convincing if he swung it at the (very expensive- looking) light banks onto which Hurts are projecting ladies’ legs, and if he did not have to spend a wee while afterwards untangling himself from his microphone lead. At various turns they sound exactly like Keane and Muse, and that is alright, by me. By now it is night time and there is a fair amount of racing around to be done. So I see Lykke Li and have some of my worries sadly confirmed; I’m not sure I believe her, there is an artifice to all the doom I honestly feel I could do without. While Lykke shares with Bouncy the ability to command a stage in a leotard, Ms. Knowles covers hers in sequins and is brazen about same. But Lykke feels the need to quite literally cloak hers and I find this slightly apologetic, synthetic even. But it is fair to say the crowd do not agree, as the tent is full and from what I can gather, largely adoring. Then it is Suede. And though I am not squiffy enough to have forgotten the year, it might as well be 1994 because they are doing my favourite ever b-side, ‘Killing Of A Flash Boy’ and Brett looks as made out of marble as he ever did. Even a personal aversion to seeing reformed bands - and its concomitant pub table theory - are trampled under welly, because Anderson is so good at this; pickled in aspic, all his then-confusing, now-thrilling sexiness fully preserved and - if anything - more relevant today. It feels nothing like a re-formed band; some feat.

Shortly after they finish, my friend and I are issued with an entirely metaphoric Community Chest Card. It reads; ‘A barmaid’s mathematical error means you only pay two hundred pounds for a double bourbon, rather than four’ – so we drink quite a bit of brown booze, drift past Eels (glorious, strange, richly serious, despite the pop), and rabbit at each other on picnic benches until James Blake comes on. And though I have no notes to record just how he was magnificent , I know he was - just as I know I will go back to Latitude, because I never have anything less than a marvellous time there. I spend the last hours so happy I become the sort of idiot that demands we stop walking so I can hug my friend and tell her how ace she is. ('No REALLY, I mean it.')

What a civilised place, for uncivilised sounds.