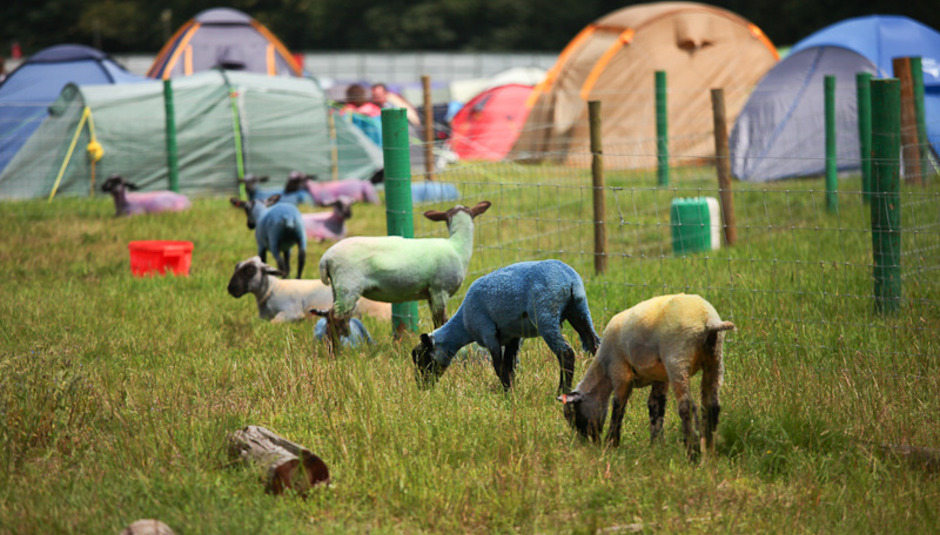 On Saturday morning I am working in the InBetweeners Teen Area, giving a workshop for Culture Works, to nine delightful young women. They want to know about music journalism and how a prize idiothole like me gets to write about BANDS for almost no pence. We compose divvy questions with which to pester civilians, vox pop the unwashed with a cameraman, and then four of us troop off to see wor homeboy Ed Sheeran. I have a mega-brolly because it is now wazzing it down, they have clipboards and are brilliant; noticing everything. Then we all trudge back in the endless rain to write Ed up, good and proper. A lot of young girls (and it should be said, what seems like half the festival) appreciate Sheeran’s incredibly earnest, loop-pedalled, musical scaffolding - and the arena is filled entirely, despite the emptying skies. So although I am neither young nor in agreement, and although I have to miss Adam Ant, I survive, and go away feeling one-part Mum, to one part Yoda. A short tour of the Modern Toss Activity Centre results in my putting their living cartoon into my facehole (as posed by Laura Snapes, above), and their periodic table of swearing into my ears. They have an old fashioned photo booth where it is possible to get a portrait done by a Real Modern Tosser - a swindle on waitress paper I feel sure they find funnier than those who pay £5 for one. They have marvellous posters, and I am glad This Sort of Thing is here, incongruously transgressive and corruptive as it is.

Then, I see The Walkmen. Already a convert, I feel a Ready Brek glow around the whole of my person immediately upon entering the Word tent. I also get an urge to shut my eyes (EMBARRASSING) but do it anyway [WHO CARES]. There are few bands capable of capturing a crowd like this, I think. And you can see it in the way people look at each other, the unconverted raising their eyebrows as if to say ‘Good, eh?’ while we sly faithful are too busy blissing to return; ‘OF COURSE THEY ARE’. At one point the pale-grey-suited fox that is Hamilton Leithauser is bent back SO far, and singing SO hard, I worry he will burst a vein and cover the front rows in red. And then they do The Rat, they do The Rat, they do The Rat. And In The New Year. And I sigh - hard - because it is resplendent - and because they always play as if the songs had just occurred to them; always furious and rich as Christmas. We will gloss past Cerebral Ballzy - because though admirably perky, their idea of rebellion seems to be something to do with skateboarding where THE MAN tells them NOT TO (which is not exactly chartering-a-ferry-to-play-snot-addled-chords-on-the-Thames-during-the-Silver-Jubilee levels of naughty). Granted, the young men of Latitude are loving them - but I find more to favour in Y Niwl, who manage to whisk us far, far away from Suffolk; to somewhere beachier, where all chords are legally required to do some sort of waltzy, staccato jangle. And where all the men have neatly-pressed shorts and sports jackets and side partings, and everyone looks like Mike Love circa 1957. Admirable, admirable band.

Before Seasick Steve comes on, he is, of course, backstage. I know this because a man who works backstage tells me a story all about it on Sunday. He also tells me about some sheets of ply (‘Not cheap. Eighty quid a sheet, right’) which his fellow stage-maker stacked up against a shed for safekeeping. But with the dirt tracks reduced to sludge, everyone starts snaffling this ply, and it makes the man ANGRY. Finally snapping, he confronts the driver of a van who has just put a sheet of his eighty quid ply in front of his vehicle, for to drive on it. He asks ‘What do you think you’re doing?’ (though I suspect he uses a bit more Anglo Saxon) - whereupon he is told the wood is free, you can can help yourself. Our stage-making man protests, points out that it belongs to him, and then he discovers he is hactually arguing with Seasick Steve’s driver. Shortly after which, Seasick Steve himself appears. There is more arge and more barge, the whole sorry episode being called to a halt when the septuagenarian blues mentalist rips off his t-shirt and chases Our Man out of the backstage area, brandishing his fists. It was eight quid a sheet, right, and it's all true, a man tole me. Which may explain why, when Seasick Steve comes on, he is racing his way through a bottle of well bad booze. I mean, just look at the mad old dog: I want to be that captivating (but less aggy) when I am seventy.

Meanwhile, my own top still firmly on, I go off to see DELS. Ah, Dels, pride of Suffolk, man after my own heart and master of hip-hop that is at once amiably straight-forward and glitchily strange. He has Elan Tamara on keyboards, and two megadudes whose names I miss on propulsive, Spartan drums and an extra set of keys. He is a calm and stately sort of rapper. I go to see him with someone who is not yet familiar and they are at once won over. There are supporters here from Ipswich, it is heartening.

We stick around for a bit of Cocknbullkid, who has half a bag of multi-coloured pom-poms on her head and person, as well as a bushel of neatly effective pop songs in her heart. Then I go to the woods to see Steve Mason, who does exactly what I want him to do, positing vaguely paranoid theorem about NOTW between songs, looking like the everybloke in a gold chain you forget he is. This is when it finally dawns on me and - drunk enough to bore for Britayne - I bang on and on and ruddy on about how the Beta Band were a scally band, a baggy band, I don’t know how I missed this before, you know, they're a SCALLY BAND, YEAH? Essentially everything starts to make sense (at least to me), and so, quite dreadful on rum, we go out in search of things to dance to. And although there is a certain dreadness when sound bleed means you can still hear Paolo Nutini despite being on the other side of the festival, doing your darnedest not make a tit of yourself while Tinie Tempah's 'Pass Out' is on, it is o-kay. After that there will be a disco shed, where you forget how you now have not one but two rudimentary socks made out of M&S plastic bags on your feet. It is hardly worth mentioning; we are dancing, iss sblurry brills, and I have already forgotten I have a house.