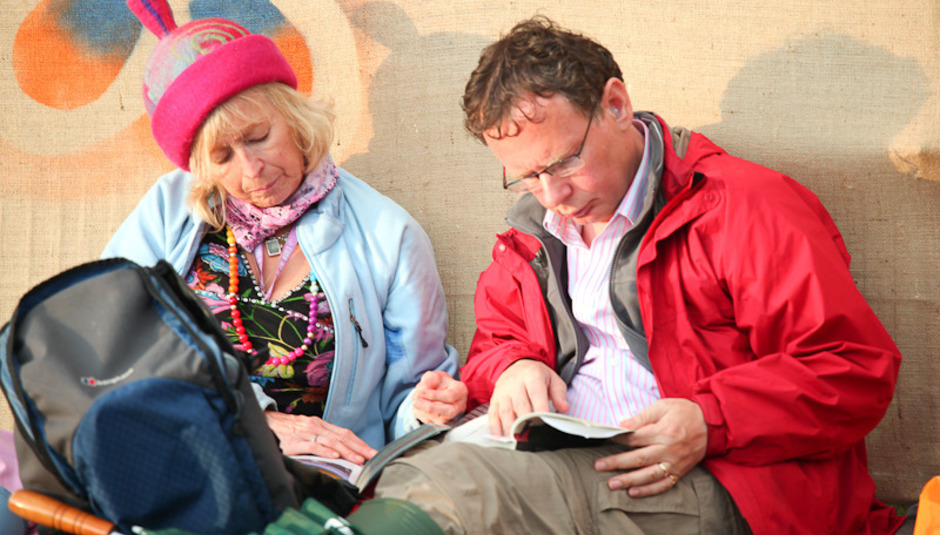 It is easy to be cynical about Latitude, not least because when the rain happens, you spy people swathed in Guardian-branded waterproof ponchos. Its faux-Woodstockian, blobby-fonted signs and its Granta-redolent £9 programmes and its heinous £3 glass deposit are all clearly vile. To heap insult upon dread, they also have this sort of neon signage in the woods: So before you have been there five minutes, some bleeding heart or other will be saying how middle class it is. Maybe it is you who will be saying it. People will ho-ho-ho. But: there are no men pissing in cups. But: the loos have attendants and queuing systems. But: there is a CHEESE and WINE stall.

Latitude IS delightful. I mean, say what you like about the middle classes, but Lore, do they know how to make things nice. And given that the weather forecast for Latitude 2011 essentially amounts to IT IS GOING TO PISS IT DOWN: ALL DAY, EVERY DAY; and since I have discovered a three-inch split in one welly on Thursday night, I want as much nice as I can get. I am going to lap you up, Latitude, with your civilized air. I am going to gulp down your bourgeois values and your well-behaved childers with both hands and a pint of cider. Maybe two.

Despite the thunderstorms forecast, Friday’s sun has definitely got his wacky festival hat on, and I duly spend my first morning wandering about, beaming, free as the youngling girls in floral dresses and with garlands in their hair. One of whom (I realise when I get closer) is really and hactually saying - out loud – ‘I love THE TREES and the TREES love ME’. I go to a wicked book stall and purchase a cheap as triple-cooked-chips Edward Gorey about recently deflowered girls; I do a scoff at the Mind, Body & Spirit tat; I seriously consider buying a vintage Flamenco dress, and I wander past Tom Warner doing his poem about mushroom-picking in the Poetry tent. Eventually I settle in the shade; half a cow in one hand, a glass of cider in the other, listening to Edwyn Collins sound-checking triumphantly on the main stage.

Avi Buffalo has the dubious honour of kicking things off, musically speaking, occupying an unholy, non-glory slot of 12:45. It’s hardly fair, partly because I think the first band of any festival should unite and uplift – Scala & Kolancy Brothers (who will actually play on Sunday) – would have been amazing for this. But Avi does what he can, making a virtue out of whine, beginning with recent single ‘How Come’, and making it sound considerably less slight than it is on record. Some teenage girls squeal when he begins ‘What’s It In For’ - and I notice a line I have not before: ‘You are tiny and your lips are like two pieces of bacon,’ which pleases me. There is drone, there are psychy flourishes, The People are pleased, but he does do a song called ‘Five Little Sluts’ (oh, Avi) and overall it is not quite the starting pistol it might have been. …which just about settles it.

Then there is a dreadfully nutty performance of Freddie Mercury and Montserrat Caballé’s ‘Barcelona’ - which is my cue to leave, not least because I want to see The Phantom Band. But something weird has happened, because The Phantom Band (like TOO MANY Bands Of Now, and far TOO MANY BANDS at Latitude) have gone all Simple Minds. They appear to have turned into a Serious Rock Band and even the lead singer dude is dressed like Theo out of Hurts (but not as good) - all mock serious doom and pomp. This is not what I was expecting, but it is all explained when Rick Anthony says ‘Hi, we’re Chapel Club’ because he is actually not Rick Anthony at all. He is Lewis Bowman. ‘Oh fack, I’ve come to see Chapel Club by mistake,’ I think, promptly sack myself, and run off to the woods.

There I discover the real Phantom Band, and find that marvellous single ‘Everybody Knows It’s True’ is quite marvellously unrepresentative - for they are much, much more Moog wonky than said song hints at. It is like Stereolab fronted by Aiden Moffat, but you cannot damn them with the oft-attributed-to-Scots epithet ‘dour’. Because they spell out their name in stacatto, computer voices, have glinting guitar lines, wicked-urgent tom-toms and jolly, massed doo-doo-doo vocals. Mr. Rick Anthony comes over all Preach; slapping the bit of his chest where his heart is, and then throwing one arm out in a anguished challenge: Come with us. It is all incredibly rousing. I retire to the main arena for a rest with a friend and discover Mark Lanegan now resembles an incredibly craggy Will Ferrell. But there are no jokes, and his unmistakeable rumble cannot disguise the fact that his collaborations with Isobel Campbell are rather dull. This makes me sad, and I long for the two enormous dudes from Screaming Trees to come out, break the stage and do ‘Shadow of the Season’. But it's not 1992 and it isn’t going to happen, so I go to see Deerhunter. Who are entirely wonderful, opting to string out and loosen the seams of all the songs on Halcyon Digest. It’s not quite the echo chamber in my head that happens when I listen at home; it’s less focused and neat. But it’s good, it’s good. Caribou, next, are not good. They are not good at all. Caribou - you utter, ackfing bastards - are absolutely incredible. And something happens, something that feels like Narnia is exploding in my ribcage, so that I am forced to use both hands and cling onto the only thing I think has constancy, which is to say, the bassline. ‘Hang onto the bass, everything will be alright,’ I think, before writing some drivelish twaddle about a ‘religious experience’ and how Caribou are ‘the MOST [underlined] TRANSPORTIVE’ as well as ‘THE ONLY REAL BAND THAT EXISTS’. See, Caribou wield all the zenith noises of house music, they know (inside out and back to front) all the button-pushing tricks that less careful and nuanced bands would slather over their songs like free sauce. The point about Caribou, though, is that despite all that raging and their wonderful clatter, they have restraint. I don’t know how they do it, but I love how they play pointed into each other in a circle to ensure cohesion, and I love that it is noisy and graceful, allatonce. I love them. I love them. I love them.

After such flagrant superlatives, Jonny have the unfortunate task of putting all the pieces of my woman-mind back together. They do this by provoking me to shout ‘I love you Norman!’ like a teen, and by playing exactly as you would expect them to; grinning, jaunty, amiable, impossible to dislike. There are quite a lot old dudes watching them and I am sure we are all remembering buying Bandwagoneque or having it taped for us like a shower of berks. But it’s okay, because Norman’s still got it and so has Euros. By the time I have witnessed the second worst cover of the weekend, when Paloma Faith butchers Nick Cave’s ‘In Your Arms’ (adjacent accomplice: ‘Oh No. Oh NOOOOOOOOO’), and despite admiring her delightful Native American headdress, I am starting to pall. But I go to see The National because it is nice to go and see a band you are not sure about, especially if you are with someone who thinks they make the music to end all notes. And despite a vague thought pootle about whether The National might be better suited to the cosier, containing environs of the Word tent; and despite not really knowing any National songs, they are stirring. Joined by Annie Clark for a song we are instructed we must ‘…Read between the lines. It’s about eating each other. But in a nice way,’ they are a band who have mastered cadence, a band about mood, a band with a heaven-sent brass section, whose doom I can’t really believe in. But tonight, I am happy to pretend to.