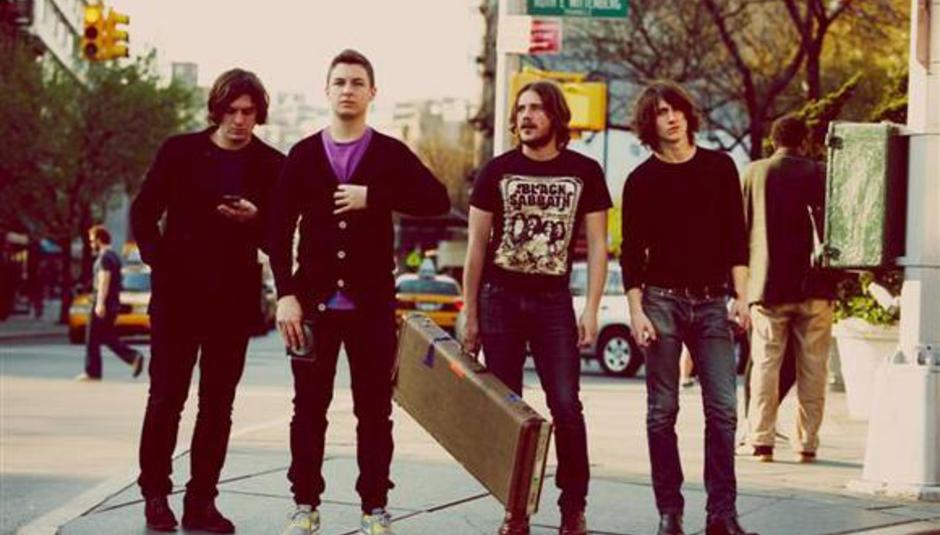 Mentioning the Arctic Monkeys in the first line of a column about new music in Sheffield might not be a wise move. It doesn’t do the city’s image any favours, if we’re still talking about a band that’s long since left town, leaving a busy roster of crummy copycats to try and cash in on the hype. It makes us sound like those town planners who cling sickeningly to the town’s industrial past by being unable to come up with a name for a new business complex that doesn’t have the word ‘steel’ in it. But unfortunately, the weekend that this column was written was a weekend in which the Arctic Monkeys were hard to avoid. On the afternoon of Friday 10th June, Turner, Cook, O’Malley and Helders made the annual trip back up north to see their mums, and while they were here they played two dates at the enormous Don Valley Bowl. Given that 20,000 people will have seen the show over the course of the weekend, you can see why it would be daft not to mention it in a column about local music. It was, by a long way, Sheffield’s biggest musical event so far this year, and it will have made lots of people very happy.

But it’s not like it was the only thing to do this weekend. Far from it – and that’s testament to the current health and diversity of Sheffield’s music scene. On Friday night, you might have gone to Bungalows and Bears to dance to the DJs from Death By Shoes, who will have no doubt played their usual superb selection of post-punk and indie rock. Or you might have fancied a trip up and down the River Don, dancing to Kenickie and Deerhunter with Offbeat. The long-running, ruthlessly independent indiepop night relocated from its base in the Raynor Lounge to a rickety vessel in Sprotbrough, Doncaster, for Offboat, and it was ludicrously good fun. And then on Saturday there was something altogether new, as Vex launched at Portland Works, a manufacturing complex-turned-community artspace near Bramall Lane. The event boasted some chin-stroking ambient sound installations and a rather lovely and unnerving percussion piece hooked up to some light bulbs that’s best explained by the following video:

Lärmlicht from joe snape on Vimeo.

So you see, Sheffield isn’t looking too shabby these days, so let’s look to the future and I’ll try not to mention Arctic Monkeys again.

Mabel Love and Dead Sons, the two local acts that supported Arctic Monkeys (d’oh!) at Don Valley at the weekend, each put out new tracks in the run up to these mega-gigs. Now that they’ve had the chance to make their case to a sizeable slab of their target audience, they’ll no doubt be getting a lot more attention than they did last week (provided they didn’t completely balls it up at the weekend). Mabel Love in particular, show signs of a commercial breakthrough, having supported Miles Kane on tour earlier in the year. Their new single, ‘Hardened Face’, is a dreamily energetic collision of crunchy, jangly, gloomy pop that itself has benefited from some Radio 1 airplay.

Dead Sons, meanwhile, haven’t made the same waves commercially but as we’ve said, that could all be about to change after this weekend. Their new track, ‘Junk Room’, came out as a free download on 30th May and is a big fat stomp through psychedelia and desert rock. Here’s a video of them playing it.

Keeping things noisy are Love At Death Beach, who’ve recently put out a self-titled EP full of punky grooves and jerky, screeching riffs. It was produced by James Kenosha who, as Pulled Apart By Horses’ producer, knows how to transform a racket into something you want turn up, not turn down.

Hand of Dave by Love at Death Beach

At the more avant-garde end of the spectrum, we’ve got Horses. They play snotty, uncompromising blues-rock, which you are guaranteed to either love or hate. Below is a video of them recording their latest cassette, which you can buy here. Below that is one of the tracks from the tape, ‘Die Tonight’, in full. Have a listen and see if you can work out whether they’re the best band of all time or the worst.

If your eardrums need a rest after all of that, try Low Duo. The folky pair’s dramatic range of prickly ballads and thunderous epics has already attracted the attention of BBC 6Music and The Guardian and their second EP, The EP of Fear and Failure, has just come out. Its opening track, 'Fifteen Years', is as follows.

And then there’s the almost-legendary Hiem, who’ve put out a new EP of big, dumb dance music that only they could manage to pull off. It’s called Freaky Nights. It’s sort of rubbish, but sort of amazing too.

Things seem to be winding down to the festival season, but there’s still a few shows to note down in the diary over the next couple of months.

30th July – Kate Jackson Group / The Violet May – The Plug

And here’s this website’s own Rob Webb talking about the stuff that DiS is lending its name to.

This is a brand new two-piece featuring ex-members of The Maple State and Dartz! Their indie-rock is full of raw emotion, mathematical intricacy and pounding hooks. Look out for some recordings on their Soundcloud in the near future, and for now watch them play one of their gentler compositions.

Her from The Long Blondes is back with more glamorous guitar pop. As you’ll have seen above, she plays The Plug at the end of July. Here's one of the songs she might play, called 'The Atlantic'.

The Atlantic (demo) by KateJackson

These DIY post-punkers will be familiar to plenty in Sheffield, but they’ve got some new tracks online and they’re rather good. The songs were recorded at a pretty unique space near Bramall Lane, run by The Audacious Art Experiment, a local record label and all-round exciting creative community. This one's called 'Sparrow'.

A new side project, brought to you by the people who brought you Wet Nuns. If you don’t know Wet Nuns, they play gutsy blues rock with phoney American accents, purporting to be from Sheffield, Alabama, in the deep south of Yorkshire. If this new band is anything like as bonkers, they’ve got to be worth a look.