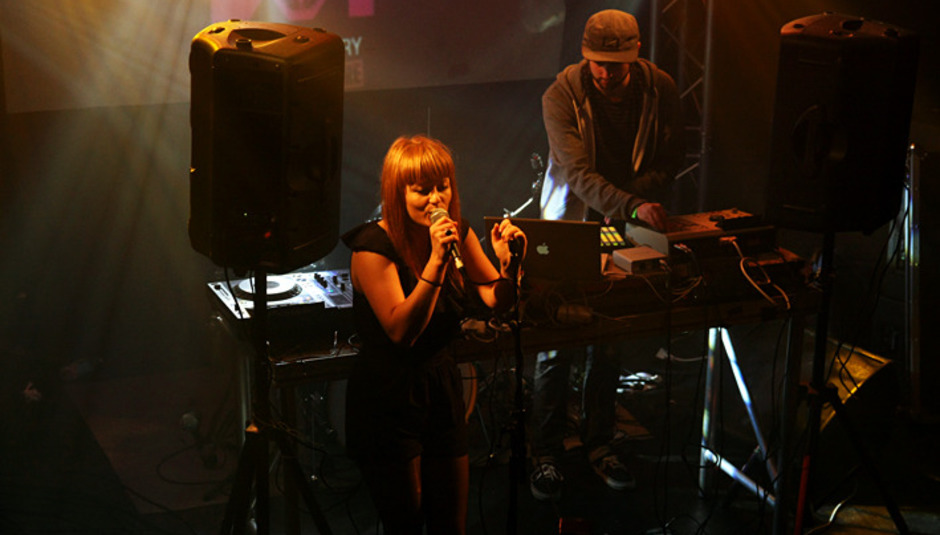 It seems that all it takes is 24 hours of decent sunshine for the streets of Bristol to take on the ever-so-slightly booze-driven atmosphere of a large scale music festival. As soon as the sun comes out, suddenly the city’s harbour sides and parks become rammed with people (and sure, we’ve had the odd riot too recently, but we’ll gloss over that).

Anyway, welcome to the second Drowned In Bristol column of the year, hopefully providing a bit of a round-up of a few of the music-related things going on and coming up around the start of the summer. As I’ve said before, I’m sure there are things I’m missing, so drop links or opinions about anything interesting in the comment section below.

Bristol’s festival calendar has been noticeably busier than previous years over the past few weeks. Kicking off with the new Simple Things festival in early May – the line-up of which was undoubtedly impressive for the price, although I’ve heard reports that some people found it difficult to get into venues (issues that I’m sure they’ll have sorted for next year). As I write this, the second day of another of Bristol’s new festivals, We The People, is taking place just down the road (to be honest, I intended to be there tonight, were it not for a touch of flu keeping me housebound). Either way, beyond the slightly unexciting headliners, the line-up looked fairly promising (DOOM, Pinch, Annie Mac, Ben UFO, etc.), if anyone made it down I’d be interested to know what you made of it in the comments section below. Elsewhere, the Stokes Croft Street Festival, had a nice atmosphere, despite the area recently being a bit overshadowed by Tesco-related issues. Personal highlights of the day were found at the Motorcycle Showroom art-space, which played host to some interesting modern folk and classical artists amidst a genuinely brilliant art installation.

The second of May’s bank holiday weekends saw the annual Bristol-leg of Dot To Dot festival (now in its fifth year in the city). In terms of local artists performing, it was good to see a strong turn-out for one of the first proper live performances in the city from Hyetal. That said, unfortunately his set was cut short by technical difficulties. However, what he did managed to play - the opening four tracks of his excellent album, performed live via samplers and Ableton controllers accompanied by regular vocalist Alison Garner - showed a lot of promise. As for visiting acts, Canadians BRAIDS proved to be a highlight, coming across all-round tighter and more direct live than they do on record. Meanwhile, SBTRKT & Sampha’s new live show – which saw SBTRKT sat at a drumkit behind a wall of synths and controllers, while Sampha provided the vocals – was nothing short of spectacular, and bodes well for the former’s debut album, out later this month. As for other highlights from the past couple of months, Mount Kimbie and CREEP at the Thekla proved to be one of the best things I’ve seen so far this year. The former of the two have just seemed to get better and better each time I’ve caught them over the past 18 months, tightening up their live show while expanding and reworking their songs excellently. CREEP, on the other hand, maybe have a little way to go towards perfecting their live show, but their songs are nothing short of great. Also, Bill Callahan at the Trinity Centre proved to be another (relatively unexpected) highlight of the past month-or-so.

Essentially, everyone should be massively excited about the fact that Omar Souleyman is playing a Glastonbury warm-up set at The Croft on June 24. For anyone who hasn’t caught the Sublime Frequencies-signed Syrian pop star before, his shows tend to be absurdly fun in a way that’s difficult to describe. Without any sense of irony, his blend of retro techno-pop and Syrian folk-music lends itself to uniquely enjoyable live sets. Matched with The Croft’s darkened back-room as a venue, and excellent local act Zun Zun Egui as a support, this is likely to be a perfectly-formed, fairly unmissable gig – chalk another victory up for our favourite promoters Qu Junktions.

That aside, there’s a fairly good run of gigs lined-up in Bristol over the coming weeks – largely helped by the fact that our city is the obvious stop-off point for acts coming through pre/post Glastonbury. After the years of putting on nothing but tributes act, The Fleece seems to finally be booking decent bands again. Highlights there include off-kilter songstress tUnE-yArDs touring her excellent second album on June 20, more great noise-rock from Boris and Russian Circles the night after (June 21), techno-influenced ‘rock-trio Trans Am on July 11 and Vivian Girls on July 20.

The Thekla has a few gigs of note too. Next month, the venue plays host to Sub Pop-signed Avi Buffalo on 11 July, plus a very welcome return from alt-blues duo Two Gallants, following a couple of years of inactivity, on 20 July.

Elsewhere, promoters No Need To Shout have a few shows coming up definitely worth checking out. **Battles play the venue on 28 June. The same promoters have a couple of strong electronic line-ups coming up too – Nosaj Thing on 8 July and the excellent bill of FaltyDL, Lone and former Spacek member Morgan Zarate on 16 July. Both shows take place at Start The Bus and run in at under a fiver for tickets.

As ever, the first Saturday of July is Bristol’s always-fun Caribbean party St Pauls Carnival, few specific details of goings-on are announced as yet, although you can assume that, as ever, a number of soundsystems will be about. Promoters The Blast have, however, announced a decent looking afterparty at Stokes Croft’s Blue Mountain featuring Toddla T and Lil Silva.

In terms of upcoming releases, Baobinga’s collaborative Joint Ventures LP stands out as worthy of mention, primarily for the sheer volume of Bristol-based talent featured. As the name would suggest, each of the album’s 15 tracks sees the producer and DJ working in collaboration with a different artist. Among the impressive list of bass music names is a wealth of homegrown talent including Multiverse-boss Ginz, Guido, Gemmy, Kowton and Hyetal. Of course, there are more reasons to be excited about the release other than simply the names attached to it – over the past few years Baobinga has demonstrated a real talent for working in collaborations with other producers. Check out one of the LP’s previously released tracks, ‘Anything For Now’ with Hyetal (below), a track that sees Baobinga fuse his percussive production style with Hyetal’s ‘80s tinged, melodic synths to excellent effect. Joint Ventures is released through Baobinga’s own Build Recordings – part of Multiverse umbrella of labels – on June 27.

On the subject of Multiverse, Gemmy (best known as one of Bristol’s trilogy of ‘Purple’ producers along with Joker and Guido) has recently added a new label to the family with his World Of Wonders imprint (aka W.OW). After being noticeably quiet on the production front over the past few months, the first W.O.W release is a double A-side from Gemmy himself entitled ‘Jah Know/They Live Under The Stairs’, which is out now digitally and on 12” – you can listen to it via SoundCloud here.

Sticking on the Purple subject, Joker, who is fast becoming Bristol’s biggest musical export, put out a new track on 4AD last month. His work is hardly under-the-radar these days, but [‘The Vision feat Jessie Ware’] (http://www.youtube.com/watch?v=SZOu83qKIcI) is an excellent example of how dubstep can be made radio-ready and yet still clever and interesting. As anyone who follows him on Twitter will know, it seems Joker’s long-awaited debut album is very close to release, which is worth being excited about.

Another Bristol-based artist who looks set to make a big impression this summer is r&b-tinged vocalist Javeon McCarthy. McCarthy has been bubbling-under on the UK-bass music circuit for a number of years now, working mostly as an MC under his previous moniker Shadz. However, since providing a particularly soulful vocal on L-Vis 1990’s Nightslugs-released Forever You EP last year, McCarthy seems to have been on a mission to reinvented himself as an all-out modern r&b vocalist. He’s in good company doing so too; he has previously spent time under the wing of Guido, and his latest ventures have seen him linking-up with Drowned In Bristol favourite Julio Bashmore. McCarthy appeared on Bashmore’s recent single ‘Father, Father’ (which was the first release on the new label arm of Bristol promoters/booking agents Futureboogie), and they’ve paired up again for McCarthy’s first proper solo single, ‘Love Without A Heart’, which is released via PMR Records on June 13.

Moving away from the electronic, dance and r&b end of things, Bristol-focused, Mogwai and Portishead-affiliated experimental rockers Crippled Black Phoenix have recently issued they’re 2009 CD releases Resurrectionists and Night Raider on vinyl for the first time. The two releases essentially make up an expanded version of the band’s second album 200 Tons Of Bad Luck, and are available as fairly plush-looking limited black and orange 12”s exclusively through Invada Records’ online store.

Finally, it’s worth giving a mention to Francois & the Atlas Mountains, the French-born singer/songwriter who has spent much of the last few years based in Bristol. Francois has recently signed to Domino (congrats!) and has a promising sounding album out on the label later this year. Check out his previously-released track ‘Be Water’ here.

All images by Lora English.