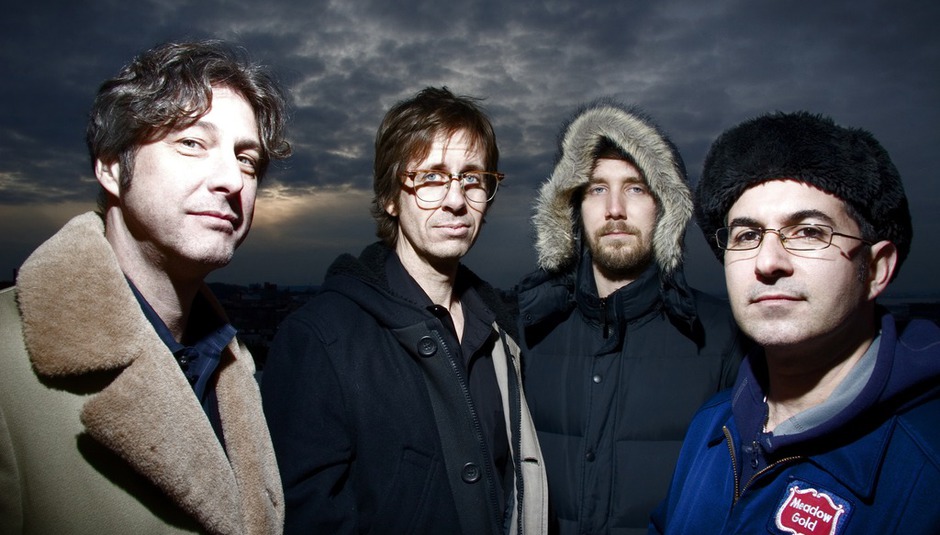 Last month saw the release of Moody, Standard and Poor the second album from Brooklyn’s Obits. Currently on a European tour to promote the record, three quarters of the band were polite enough to spend some time talking to Drowned in Sound prior to their London date, when we discussed such such important topics as the perils of touring, being indie rock royalty (or not), and the whereabouts of a good burger...

Is there a difficulty in finding a balance between working and being in a ‘professional rock band’, for want of a better phrase?

Rick Froberg: Rock bands don’t make that much money unless they’re bigger then we are, that’s for sure. We get paid enough to augment our meagre salaries. Maybe pay our rent for a couple of months, if we’re lucky. What keeps us doing it? Pure foolhardiness.

Sohrab Habibion: Our drummer is the only one with a real job. The rest are all freelance.

RF: It’s amateur rock. We get paid, but considering what we get paid, it’s not much more then a garage band.

Does Sub Pop help you out in any way?

RF: If they want to go bankrupt they can.

SH: We have a really good relationship with them. I think that it’s in our best interest to try to do what we do as best we can without asking for anything from them.

When you signed to Sub Pop were there any expectations as to what you should achieve? Did they make you buy flannel shirts?

RF: I actually own some flannel shirts anyway.

GS: It was part of the package. When we signed on the dotted line they handed us some flannel shirts. They didn’t fit well.

SH: They didn’t say you have to sell this many records, there’s nothing like that. They genuinely like our band. They are happy that we do what we do. We do okay enough.

SH: A lot of what they put out does really well, like Fleet Foxes, which helps a band like us. It means they can say we’ll do another record with you.

The new album is called ‘Moody, Standard and Poor’. Is that how you think of Obits?

GS: It describes both our temperament and our personal state of affairs.

RF: It works on a lot of different levels.

It’s quite a spacious record and much more laid back then your previous works, not just Obits but your previous groups as well. Was that a conscious decision?

RF: Space is a premium. It’s like real estate in New York or London. You want space and you fill it up with stuff and it’s not space anymore.

SH: I think for us writing music so that it’s not a claustrophobic feel. It can be propulsive without being so compressed, not only in a sound engineering way, like a physical space where the ideas compressed. It’s nice to have a little bit of room.

RF: The more you bury the individual voices of the things that are happening, I think rock and roll music is better if you can hear the humanity of the things, and if you have lots of things going on at once, a lot of overdubs and effects, then you’re going to obscure those things.

RF: We use old amps. GS: We just like old school stuff. RF: We don’t live in 1968 or 1988. I don’t think our music sounds like old music. We use a lot of those forms. We use simple chords progressions and things like that. We’re not trying to reinvent the guitar.

SH: We live in a time where new things are exciting. For example, here there’s a weekly music newspaper that comes out and tells people these are the things you should be paying attention to. We are just not a part of that culture. We don’t follow those things. Our music is based around a really simple premise of making things we like. That’s what we pay attention to the most; satisfying our selves. At our age and in our lifestyles, if it doesn’t have value to us….

RF: You eventually give up on that.
GS: At least for me, I’m into mining what’s really old and undiscovered. And I hear something new in that and think “Oh that’s really cool”.

RF: Music is a continuum; you can drop in at any point. All these things that you think are new have been done before.

SH: I was listening to a compilation of Indonesian guitar music from the 70s and there are ideas on there that are as contemporary sounding as anything I’ve heard. RF: There’s only so much you can do. There are only 12 notes.

The album sounds quite timeless in a sense, like it could have been recorded or released at any point in the last forty years.

SH: The way we recorded the new album the instruments sound very natural. We’ll see what it sounds like in ten years. For example, I listen to records I like that were recorded in 1982 and there’s a certain recording styles, that date music and I have no idea what our music will sound like.

GS: Even at clubs. The aesthetics of the sound people.

RF: I wish we could rent our own PA. We’re having problems tonight. There’s a grounding problem. We’re getting shocked when we use the mics, so we’re going to have to wrap a t-shirt around them. The club thing is interesting. We don’t have our own soundman so we are dependent on a complete stranger’s interpretation of what the balance our band should sound like, which is a really weird situation to be in. They’re going to hear our band through a guy from Sydney who’s been living in London for 11 years; his version of what our band is supposed to sound like. That’s just weird.

You guys are also known for being in other bands. Do you find it annoying, the idea that you’re sometimes considered indie-rock veterans? Do you feel it gives you an advantage?

GS: Only when there’s one over zealous fan. They always gravitate towards Sohrab and yell Rick’s old songs right in his ear. RF: Personally, I’m glad they like the songs but they’re not going to hear them. Oh yeah, we learnt that song just for you.

SH: On the one hand people need a reference point. There are certainly a large number of people who have heard our group because of what Rick’s done and I think that’s a great coattail to ride on.

RF: It gives you a certain advantage. It’s a double edge sword. Any band I was in, they always wanted to hear the band before. It’s like “Well, you missed it”. SH: If you’re always expecting things you’re already familiar with, you’re setting yourself up to be disappointed. No matter whether the thing could be good or bad, you’re expecting something else; it’s just not a great way to experience the world. RF: That’s one of the reasons we use old chord progressions and stuff like that. It’s familiar. It helps people to be comfortable with things that are unfamiliar, that you have no control over.

SH: If you want to come to the show because of Rick’s old band, that’s fine. Just be willing to hear it for what it is.

RF: Or at least pay. You have to keep your eye on the bottom line. And your rider.

Have the support bands got to it?

SF: The band Fists who we’re playing with are really cool.

RF: They drank half that bottle of whiskey. We’re going to fist them later.

That’s going to be the headline. SH: (laughing) We’re going to fist them later.

Someone wanted me to ask you guys what the best burger in Brooklyn was.

GS: I would have to divert it to Manhattan and say Shake Shack. They don’t have one in Brooklyn yet. They’re opening one in Queens. Shake Shack is so simple. They sell burgers and hot dogs, and you can get fries and beer. That place is good. SH: There’s a place in Williamsburg called DuMont that is supposed to be really good. RF: What’s that really old place? The steak place?

RF: Yeah, Peter Luger. I bet you can get a good burger there. Johnny MacK.

GS: Yeah, Johnny MacK’s has a good burger. As does 12th Street Bar & Grill. No-one’s going to know where these places are. Where is your friend going? I don’t know. He just wanted me to ask where the best burger in Brooklyn was, and why you guys are so rad.

Bass: We’re not rad. Some of us are dads.

The new album Moody, Standard and Poor is out now on Sub Pop.

Grab a free track from here: