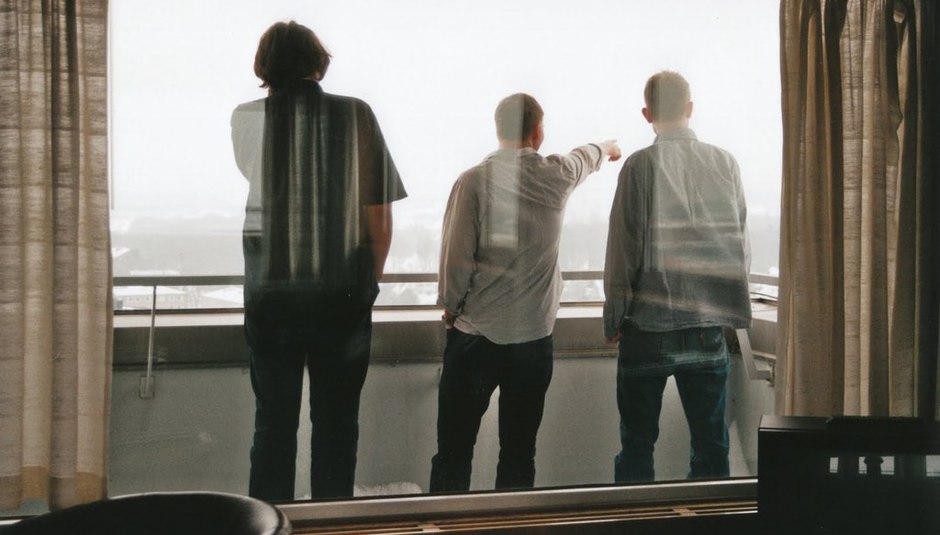 Running from May 11 to May 14, Manchester’s Future Everything Festival prides itself on showcasing innovations and progression in arts, technology and music. Plus Fucked Up played. Three of team Drowned In Sound covered an event which surprised in just how much of a festival it actually felt given the distances between venues. With gigs being held right up in Islington Mill’s warmly ramshackle climbs up in Salford down to the more standard fare of the city’s Academies it seemed that the vital sense of community would be hard for the organisers to pull off. Yet over the course of four very different days that constant never failed; here, then, are our highlights.

The name says it all. Future Everything. It’s like something out of a science fiction film and that’s not far from the truth. With a combination of art exhibitions and conferences, the festival brings together an innovative and vibrant collection of artwork and speakers via the digital realm. A contrasting environment, exhibitions ranged from Arcade Fire’s interactive Google Map incorporating video for ‘We Used to Wait’ - its footage based around images of a user’s typed-in postcode - to Kars Alfrink existentialist approach via his ‘New Games for New Cities’ conference, dismissing the concept of loyalty schemes on the claim that they hinder social progress. ‘Sounds of the City’ took a more detached view, taking on a spectator view allowing participants to take in the hustle and bustle of the London Underground and the cosmopolitan chatter of Stockholm.

Whilst admittedly these created an abstracted nature for the viewer, it was the ‘Future Music Lab’, ‘Switch on Switch Off’ and ‘iShed’ presentations that engaged the participant in a much more sensory and lateral experience. The former two allowed users to indulge in electronic experiences; ‘Switch On…’ showed attendants how to trigger lights and sounds without the use of switches through conductive circuits. ‘Future Music Lab’, meanwhile, demonstrated the ease of creating music adaptable through motion and other sounds, albeit, both a little simple for those with experience in these areas. ‘iShed’ engaged the most basic of senses, one exhibit taking people on a journey of smell in tandem with lines from a novel.

Liz Bougatsos is drunk or high or both, giggling something garbled about how we've got to take them all out on the town – but it's a good thing she is, 'cause her half-tongue-in-cheek sashays and dizzy, bat-wing spins make up for the lack of energy in this not-full-enough Ruby Lounge. It's testament to Gang Gang's boisterous glee and sheer volume, though, that despite the venue's perennially odd layout those at the front still feel like they're grappling with each other in a fogged, swampish ooze.

Bougatsos hunches and hoists herself into her drums as though they've challenged her to a death match; whooping and screeching, she cackles and gloats and runs her tongue across her teeth and the mic with an almost dangerous hysteria – it's like she can taste the elastic charge of Adult Goth or the sweet, sad drench of House Jam (which unfurls itself slowly, slyly, from a stretch of improvisation, eliciting squeals and screams from the back).

Mindkilla is the only disappointment: Eye Contact's highlight, it's thrusting and furious on record; but tonight, there's something missing – those gut-tunnelling, sniper-sharp shots of synth are replaced by a new melodic figure on keys and tuned percussion that sounds too spangly and, well, a little harmless for what we're expecting.

But no matter: Gang Gang are one of those bands that make you wonder why you're bothering trying to convey sound in words, because they're an explosive mess of ecstatic contradictions, sounding at once fetid and gleaming; at once rabid and euphoric; at once primordial and yeah, fine, for the sake of this festival's premise, glassy and glossy and... futuristic. THERE, I SAID IT.
(Lauren Strain)

“I’ll stop with the Swedish now,” vocalist Johan Duncanson says with a grin on his face, after speaking with the Swedish tongue to his sound guy. But it doesn’t matter if he’s speaking Swedish or English tonight, nor do The Radio Dept need a physical drummer, a visceral adrenaline being provided by their electronic drum samples. Their spectral indie pop creates an atmospheric panorama that transcends any form of vocal communication, and even then, the modesty on the threesome’s faces display sincere warmth and mellow straightforwardness that is devoted to their otherwise cosmic shoegaze. It’s like they’re visiting aliens from another planet giving the gift of their sweet soothing lullabies.

Opener ‘Domestic Scene’ immaculately drips with trickling guitars that float along in an ethereal limbo, Duncanson’s apparitional voice drifting along in astral motion, not too over-laden with stage effects, as to add a touch of natural emotion to it. ‘David’ is calm and collected as the bass line moon bounces like an ethereal Belle and Sebastian circa Tigermilk, ‘Ewan’ soars with uplifting phantasm and grandeur, guitars surging along like Apollo 13, and ‘Freddie and the Trojan Horse,’ with its waltzing pianos, broken strings and phantom ambience, dances around in the darkness of the moon with Cocteau Twins’ dejectedness.

Finally they leave us with ‘A Token of their Gratitude’ where the combination of twinkling guitars, oscillating bass and alluringly captivating whale song synths all mould together into a luscious radiance of planetary aura. They’re destined for the far reaches of space, and not just countries outside of Sweden.

Some grumpy cynics might argue that sticking an excitable, oversized behemoth of a front man right into the middle of the crowd for his band’s entire performance somewhat detracts from paying attention to whether they’re actually any good or not. And in fairness, it’s likely that any of those naysayers were probably back at home scratching their carefully styled beards post-Steve Reich rather than enjoying in the basic but infectious delights of Fucked Up. Pink Eye’s on standard form tonight which of course means his group’s set is an absolute riot, roughly three quarters of the crowd at Islington Mill sweating through their cotton, a perspiring mass of perpetual motion as they seek to follow the larger-than-life pied piper around the venue.

That the PA’s blown, meaning that the Canadians raucous hardcore is barely distinguishable, merely emphasises how much stock they put in their front man’s willingness to play clown all evening. The crowd are enraptured as their protagonist pours candle wax down his chest, brushing off an incident which sees one cretin floor him with a rugby tackle, before cavorting back to the stage as those unable to touch him concentrate instead on trying to pull down the ceiling (several water pipes are left dangling precariously by the end of the night.)

How Fucked Up quite fit into the festival’s ethos isn’t quite clear, this is the sort of rough and ready punk atmosphere that’s been a staple for over forty years now, yet what they do prove is that you can experiment and seek to evolve sonically as much you like, people will always have time for the most simple but effective means of crowd interaction. Tonight we’ve the bruises to prove it.

Beauty and the beast or the primitive vs. the civilised world – whether you’ve seen the 1975 version or the 2005 remake, everyone knows the story of King Kong. The character of Kong is one of the most iconic beasts in the history of film making and the story transcends all time in classic fashion. For those who don’t know, Rob Da Bank’s new compilation soundtrack (three years in the making) for the film has already been screened on BBC Four and it truly expresses the tongue-in-cheek of Youtube’s ‘Dickhead Song,’ essentially having new age fun with a vintage feel.

Radiohead’s ‘The National Anthem’ opens the film as the thick primitive bass foresees the awesome power of Kong in a dramatic irony and, combined with the ghoulish synths and chaotic horns, it all matches the gritty 1930’s backdrop of the New York dockyard. But what’s more sinister is the inclusion of Ian Brown’s ‘F.E.A.R.’. The orchestral strings intricately envelop with a hint of smoke, battling with menace. It’s a perfectly epic reminder of the gargantuan battle between the behemoth Kong and the prehistoric Tyrannosaurus whilst the creeping nature of the orchestra poignantly reflects that there is nothing quite as malevolent as killing your nemesis by snapping their jaw wide open. But it’s not all malevolent as Sigur Ros’ ‘Svein G Englar’ and Springsteen’s ‘Born to Run’ add a glimmer of hope and aspiration, the latter set to Anne Darrow and Jack Driscoll running from the mighty Kong, surprise surprise.

Finally, The Pixies’ ‘Monkey’s Gone to Heaven’ adds humour courtesy of the name, but also a colossal finish as the chunky build up accompanies Kong’s demise. In the end, it wasn’t beauty that killed the beast, but this fuckin’ awesome soundtrack.

It’s somewhat ironic that 65daysofstatic, a band who’ve sought long and hard to escape that most semantically cinematic cloak of post-rock, should find themselves some seven years after those labels were first thrust upon them, sound tracking a film. Despite their claims to the contrary though, even recent LP We Were Exploding Anyway, which saw the group’s sharpest change in direction yet, couldn’t help but cling onto those more panoramic moments amidst its frenetic techno-scuzz.

The best way to approach this then is to view it as a complete uncoupling from the band’s trajectory, a side-project almost, and it’s to the four-piece’s eternal credit that tonight doesn’t just sound or feel like “65daysofstatic playing over the top of a film,” instead exercising restraint in order to merge more piano-led passages with Silent Running’s idiosyncratic future dystopia. Make no mistake, despite their music’s past inclination to head into this direction this is still an ambitious project; a group trying to whittle their sounds into forty minute LPs suddenly forced to hold suspense and interest for over ninety, and they largely do without feeling the need to resort too much to the sort of staple atmospheric drones many others might fall back on in similar circumstances.

Their sound track instead bristles with stoic rhythm, enlivening and emboldening close-up shots of lead character Freeman Lowell to make explicit the ongoing changes in his psyche, supplementing his decision and subsequent action to overthrow the rest of his crew with pulverising bombast. Admittedly this sometimes goes too far; Silent Running isn’t the most ostentatious of sci-fi films, large parts focusing on the intimacy between Lowell and the two robots he ends up spending most of the proceedings with, and occasionally 65 can’t find the required subtlety and refinement, some scenes given more gravitas than they really need.

For the most though this is a captivating experience, the group inflecting the film with both considered reflection and raw emotion, the latter exemplified in the film’s explosive ending as the band shower the scene in a debris of monolithic guitars. It isn’t the easiest evening for the band but their commitment in matching their ambition wins through with the dogged tenacity that they’ve always had.