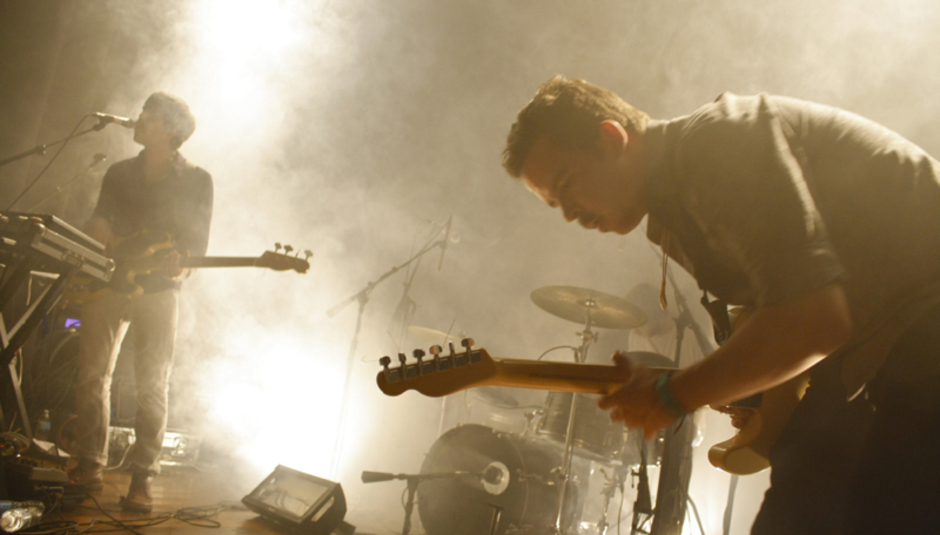 One of the benefits of living in America’s heartland is that every band worth their salt will tour past your doorstep. East to west, west to east: all roads lead through Chicago. If you’re a midlevel indie act with a penchant for fog machines, chances are likely you’re playing at Lincoln Hall. That’s where Bear In Heaven (NYC) found themselves the night before Halloween. Costumes were already in full effect, lending a carnival-esque atmosphere to the Brooklyn band’s dark, moustache-fueled disco as the three-piece strut its way through a setlist pulled largely from their anthemic Beast Rest Forth Mouth.

With Lollapalooza and Pitchfork in its pocket, Chicago is known for summer music festivals. But the music doesn’t disappear with the sunny weather. Psych Fest made its second annual outing this January, masterminded by the Chicago Metaphysical Circus, and hosted by the Hideout, one of the sweetest little indie venues in the Windy City. The lineup was stacked. Mondo Drag, the leather-jacketed psychotics Catacombz, Dead Luke, VERMA, Dark Fog, and more, all collectively kicked out the jams over the course of two heady nights. The showing was impressive enough to make you wonder whether a neu-psych movement might be gaining steam in the Midwest.

Speaking of neu-psych, Boston’s Truman Peyote rolled into town in late February with Birthdays, hooking up with notable locals Nude Sunrise and I Love You for an intimate night of weirdness at the Empty Bottle. Truman Peyote craft intense and sometimes odd electronic vibrations while maintaining a solid rock-n-roll undercurrent in the live show. Include the Nude Sunrise in the same hybrid category: after that, all bets are off. Birthday was a one-man noise machine who set up shop behind a soundboard the size of a pizza oven, and I Love You served up a synth-saturated kamikaze sucker punch with topless pit-invasion dance party antics. Hopefully everyone got their fill of fun that night, because the good vibes hit a snag less than 24 hours later when members of Truman Peyote got tossed into a St. Louis lockup on charges of marijuana possession. Rock ‘n’ roll, takin’ its toll…

If You Ban It, They Will Come

Nothing fires the ardor of conservative America more than the thought of young kids having a good time and not caring about the consequences. When the infernal elixir Four Loko hit the market, it promised nothing more than to get you really (really, really) crunk, and – unlike politicians and your first sexual encounter – it delivered. The alcopop was 25 ounces of wine-strength bubbly fizz with a hyper-caffeinated infusion, sheer chemical mayhem, which naturally found its way into the hands of reckless undergraduates.

A few alcopop-related disasters later, Four Loko found itself banned, cleared off the shelves. But not before local blog Cream Team and QRO Magazine gathered up the last reserves to throw a “Four Loko Funeral” bash commemorating the vile liquid and celebrating local music. Psych-pop rockers Secret Colours joined with locals Panda Riot, Calm Palm Vapor, and Minnesota’s Chatham Rise to mourn the passing, hang out with helium, and generally spit alcopop in the eye of prohibition.

The night also saw the premiere of Calm Palm Vapor’s video for 'Run The Tables'. Here’s what the guys had to say about the concept behind the video:

Run the Tables (video) depicts a story of a lonesome bear seeking adventure within the realms of daydreams, books and music. Our ideas flourished as the week of shooting the video began. Brian and I shot back ideas about using animals masks to create a different world, in which our bear friend can go out and do human activities (i.e Space Exploration, Skateboarding and Dance-dance-dancing). We wanted to have fun, goof around and bust out even our own acting abilities to insure a quality video.

A Quick Six with White Mystery

Drowned in Sound sat down with Miss Alex White & Francis Scott Key White of Chicago’s favorite blitzkrieg blues-rawk duo White Mystery right before they left town for SXSW in Austin, Texas. Find out more at their site www.whitemysteryband.com and watch for their new album Blood & Venom (available at their site) to drop on 4/20.

DiS: Your self-titled debut was recorded in a Chicago steel factory? How was that for a creative environment?

White Mystery: It was a practical environment, conducive to recording music with Joel's Gear and Devin Davis.

DiS: White Mystery is a brother/sister act: did you grown up playing music together?

WM: We have been playing music together for a decade and it is our destiny to continue playing.

DiS: The band seems to have a pretty tight aesthetic - is there a graphic artist in the family?

WM: Our mother is a photographer who taught us to keep a keen eye for balancing and arranging visual media. Alex White is an aesthetic prodigy that pushes the boundaries of design along with the vision of Francis White.

DiS: SXSW is on your tour schedule this year. What are you looking forward to about the whole experience? Dreading?

WM: Looking forward to the warm Austin air, dreading the traffic, I guess.

DiS: The new album Blood & Venom is dropping on 4/20. Can you tell us a little bit about it?

WM: Blood & Venom is a heavy, dark, sensory, lyrical album recorded similarly to the first. We are very proud of it.

DiS: Since this is a Chicago column, I've got to ask: what's your favorite venue to play in town, and why?

WM: The volume of shows we play in our home city means we can't play favorites. The world is our stage and Chicago is our favorite venue.

Notes From The Underground

When the weather drops below freezing, musicians hide out in (hopefully) heated studios and turn out amazing songs. Here’s the best of the best in Chicago. Google them, stalk them, haunt their dreams and reveries: these are the bands you need to know about, and most of the releases below are free for download, so get to it!

Loyal Divide sounds like a wholesome indie act that started to hang out with the wrong crowd, picked up a club-n-dub addiction, got chewed-up, spit-out, and landed on the sunny side of the street with a new LP Bodice Ripper. Due out in late winter/early spring, the album promises more of the rock-n-roll-meets-club-banger fusion that has been turning heads since their EP Labrador dropped in late 2008.

The psych-rock outfit VERMA surfaced out of nowhere to start shredding heads in 2010 with their EP Salted Earth. Monster-sized feedback loops, guitar growl, spacey vocal tropes: this band has the drive of Neu, the balls of MC5, and the grit of Black Sabbath. Firsthand witnesses of their set at Chicago’s Psych Fest 2 reportedly “lost their minds”, so expect good things from VERMA in the rest of 2011 and beyond.

Micro-genres come and go, so let’s appreciate when classic Americana gets done right without the frills. Chaperone is Arcade Fire by way of the wheat-filled expanse of the Heartland. Enervating, energetic, enthusiastic; the band can lift you up with hyper-frenzied numbers like “Thomas[!]” and decelerate into sweet country ballads like “Waltzing Topside.” Both songs and more can be found on their impressively precocious EP Cripple King.

Disappears didn’t sneak up on anyone with their latest LP Guider. The band has been a staple of the Chicago underground for years, sporting a sound that mixes full-throttle tremolo-inflected guitar wails, blistering percussion, and reverb-heavy dancehall vocals. The band garnered some extra buzz when longtime drummer Graeme Gibson departed shortly after completing Guider and was (temporarily) replaced by none other than Sonic Youth’s Steve Shelley. The rich get richer, and the rest of us get to enjoy a dynamite album.

The mysterious digital dronecore artist SECRETWARS dropped Satellite Shadows on a Chicago scene that knows its electronica, and received high marks all around. Taut, tense, thrilling lines of ambient trance interweave on the 6-track EP to play the enabler to your aural fixation. Rumors as to the identity of the artist abound – none more intriguing than the Richard D. James hypothesis... Give it a listen and draw your own conclusion.

Nude Sunrise have been making a name for themselves of late with their tireless gigging and their LP Hunks Like Us (album cover pictured here). The band members look barely old enough to drive but the album is remarkably mature in its almost effortless hybrid of acts as diverse as the Grateful Dead, DEVO, Can, and a bevy of soulful southern rock. Hunks Like Us shows a real appreciation for long form, minimalist pop delivery, so reschedule your appointments, spark one up, and bask in the hazy light of a Nude Sunrise.

The latest LP Carousel from electro-pop outfit Save The Clocktower sounds like the soundtrack to all your favorite 80s teen movies. In fact the band name might very well be a reference to the lightning-addled municipal building in Back To The Future. Who knows? Who cares? The synth beats, the angular melodies, the breathy vocals all fire with the icy precision we’ve come to treasure from the “greed is good” generation.