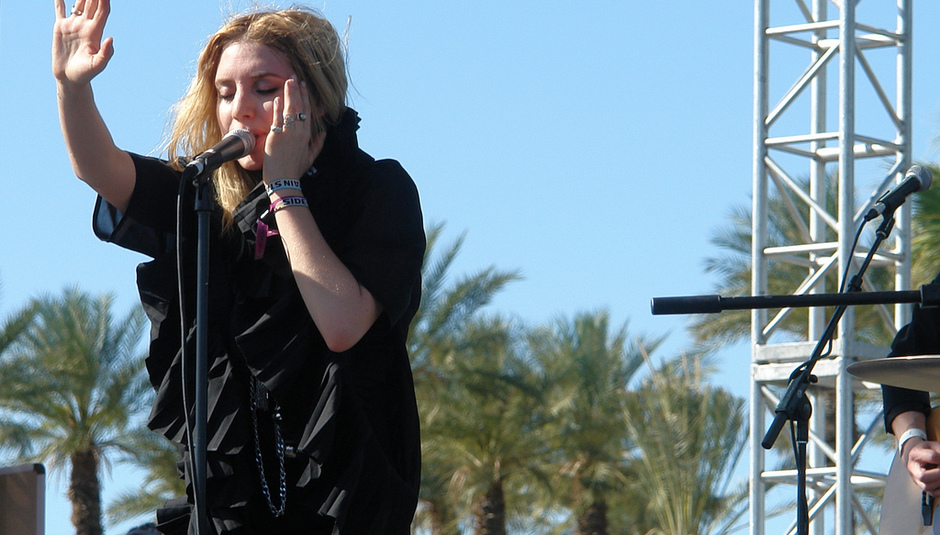 This week's content-themed Spotifriday playlist, featuring songs from Lykke Li, Razika, Beat Connection, Half Man Half Biscuit, Beady Eye and some more bands. Click your mouse here to listen to it and here to browse through our extensive archive of nearly 2 years' worth of Spotify playlists.

It's not often that we (read: me and sometimes Sean) kick off these playlists with Single of the Week but, I think, it'll be something we'll be seeing a lot more of in the next few weeks mainly for the great desire to put some order and meaning into my life. It might not work, but you have to try these things. Anyway, Beat Connection were awarded the top prize for singular cuts of music released on a given Monday, as awarded by Wendy Roby. Read what she had to say about it here.

Lykke Li is one talented person. It seems like a long time since her debut record Youth Novels dropped and garnered some very positive reviews indeed. The new one Wounded Rhymes came out this week and our verdict was perhaps not as positive as we'd hoped. It's still a good record but there are some trappings, thinks Adam Johns. The whole thing is available to listen to on Spotify, but 'I Follow Rivers' is a single, and a good one at that.

A couple of weeks ago myself and fellow DiS writer/scribe/scrivener Wendy Roby went to Oslo for the annual Nordic music congress/festival/conference by:Larm. It was fantastisk. One of the bands which left a deep impression were Deathcrush who I was too scared to stand at the front for. It was still pretty great from the back, mind. Anyway, this one's not about but named after former Metallica Bassist Cliff Burton, who had an unfortunate ending some 25 years back in Sweden, which is not to far from Norway, which is where Deathcrush are from.

4. The Gossip - 'Standing In The Way Of Control'

Do you like THIS version or the OTHER version best? Probably has to be the OTHER one, doesn't it? A bit more dancefloor-friendly, eh? Yup. This doesn't really matter. We interview Beth Ditto the other day and now the results are up. Read the super interview here.

'10,000 Horses Can't Be Wrong' is very much the sort of song title you'd openly dismiss saying it's "silly" only to learn that it's taken from some deep-meaning historical or philosophical context from quite some time ago. Like finding out Little Boots was Caligula's nickname (thanks, University Challenge!). Regardless, SMD have just been announced for this year's Camden Crawl. That is good news.

Also good(ish) news is that Meat Puppets are still around and still releasing music, as we found out this week. They've got their sixteenth studio record on the way, if my maths are anywhere near correct. This is the best MP song, though, isn't it?

Razika were another band who were at by:Larm. As I wrote up there Wendy Roby was also in attendance. She saw Razika and you can find her thoughts on that band - and many more of varying degrees of quality - here. The strange thing about this song is that, although they are singing in Norwegian they appear to be singing it with an English accent. Reminds me of this beauty.

I'll be totally honest here. Nowhere in our content are the popular Nigel Blackwell-fronted band featured on this site. I don't even think they've been mentioned on the boards this week. They did, however, release some tickets for a show at Shepherd's Bush Empire later in the year, though, which is good enough for me. It also contains the great line "NO DRY ICE, NO DRY ICE, HEY JASON THEY'VE GOT NO DRY ICE!".

Yes. It's Battles. With Atlas. Of course. What else? ANYWAY. There were a couple of Battles-related news pieces this week, the first being that they're going to curate a day at ATP's Nightmare Before Christmas and the other was tour-related.

Stricken City are unfortunately breaking up. Or they may have already broken up. Either way, Losing Colour will be their final release. That's quite sad. Then again it's a good record, as we gave it 8/10. It's nice to end a career on a note like that.

Andrzej Lukowski thought not a great deal to the Beady Eye record. He say: "suggesting Beady Eye have done well by actually getting a couple of melodies together is rather like praising a once robust, now ailing relative for not shitting themselves at the dinner table. There are the makings of a decent band here if the people involved cared enough. But they probably don’t, and despite a couple of green shoots, this is a dreary affair." Full review here.

In Photos: The Chapman Family @ The G...