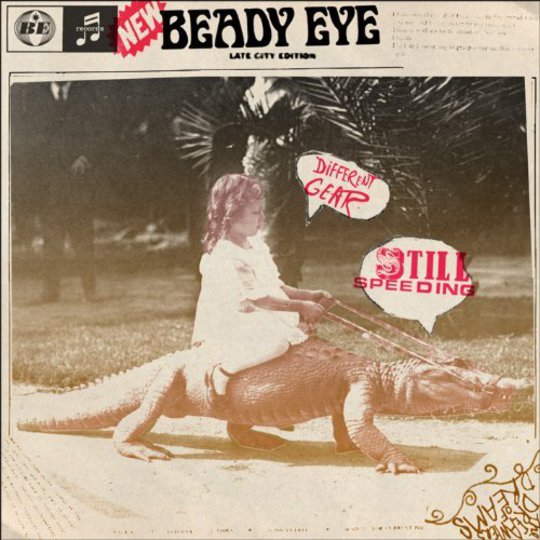 Why do Beady Eye even exist? A gesture of spite directed at Noel Gallagher? That would be kind of rock’n’roll. Money? I mean, maybe… while it’s dispiriting to contemplate the fact that Gem Archer is probably vastly more wealth than anybody who will ever read this review, it's not like rich folks are against getting richer. Is it because Beady Eye's three songwriter members – who’d spent the last several years in a band that was virtually a tribute act to the early songs of Noel Gallagher - were genuinely convinced that the world needed to hear their latest compositions? In his heart of hearts, could even Liam think that? To be honest, I doubt Beady Eye exist for any of those reasons. Beady Eye almost certainly exist because following the departure of Noel Gallagher, nobody else in Oasis – Liam Gallagher, Gem Archer, Andy Bell or Chris Sharrock – could think of anything better to do. Liam’s combination of messianic self-belief and chronic need for attention dictated that he would continue to release music and give fun interviews and the other three… I mean, they don’t look like men with hobbies.

That all accepted, some reviewers have responded with bemused delight to the very fact that with Different Gear, Still Speeding Liam, Bell and Archer can cobble together a half-decent tune. Well, you’d hope so, and latterday Oasis was hardly a one songwriter band - Don’t Believe The Truth, in particular, showed that the others could serve as perfectly solid supporting players. As the main event, though? Hmm.

‘Four Letter Word’ opens the show noisily, a boisterous pub rock cousin to U2’s ‘Hold Me, Thrill Me, Kiss Me, Kill Me’. But while there’s energy here, and intent, it never scales the heights it should; Liam completely chokes the kiss off line “nothing lasts forevva!”, hiccupping timidly through his nasal passages where he should be dispatching it with an old lion’s roar. But ‘Millionaire’… ‘Millionaire’ is twee. I mean, seriously. Crappy twanging acoustic guitars, Liam blandly bleating something along the lines of “medal with me and you’ll meddle with yourself/For there is a higher wealth”… I suppose it’s meant to have a cod-spiritual Beatlesy vibe, but it’s basically beardy crap delivered so limply it'd probably offend Stuart Murdoch. ‘The Roller’ sounds quite a lot like ‘Instant Karma’; which is on the one hand lame, on the other kind of fair enough, as it seems unlikely Beady Eye’s target demographic would be particularly satisfied if there wasn’t a Lennon rip included.

Track four really is called ‘Beatles and Stones’, and features the line “I’m going to stand the test of time like Beatles and Stones”. Now, it’s tempting to be condescending here, but accepting the clanging self-parody of the lyrics, the song’s rough, bar room rock’n’roll, gilded with handclaps and honky tonk piano, is actually something of a departure for all concerned. The title of Beady Eye's debut is so Quo-like that when the – surely intentionally funny – cover art is taken into account, you have to assume that Different Gear, Still Speeding is on some level supposed to be a tongue-in-cheek name. But for the aspirant pendant, it does draw attention to the fact that Oasis were not a band given to speeding at all, dourly clinging to the chugging mid tempos whence lay the anthems. And you know, even with his larynx winding down, it’s nice to hear Liam tackle some music with an actual pulse. ‘Bring The Light’ is a further journey down this raucous road, hammering keys and soaring backing vocals pitching it somewhere between T-Rex and Jerry Lee Lewis. Throwaway, but genuinely quite fun, and if Beady Eye had focussed their energies into creating a good time, pre-Beatles rock’n’roll album they could have sort of been onto something. But as songs like ‘Millionaire’, ‘The Roller’ and the quite terrifyingly dull cod-blissouts of closing couplet ‘The Beat Goes On’ and ‘The Morning Son’ attest, the idea that this group of musicians were ever going to be arsed to make any sort of artistic statement were minimal.

What really compounds the inessentiality of Different Gear, Still Speeding is that a spot of boogie woogie is the last way in which we might have hoped these musicians would shine. Okay, it would have been quite something if Andy Bell had suddenly been permitted to write Ride-esque guitar epics again. Probably he doesn't want to any more. But you know, he could have thrown us a bone. Worse, though, are the indignities that time has wrought upon Liam’s voice. While Steve Lillywight’s production job isn’t desperately convincing, you can’t really blame him for the fact that Liam now essentially sounds like Tim Burgess, that phlegmy roar neutered to a nasal whine.

Different Gear, Still Speeding is not a disaster: by and large it radiates the stolid competence of a band on autopilot, with a couple of flashes of likeable enthusiasm. But suggesting Beady Eye have done well by actually getting a couple of melodies together is rather like praising a once robust, now ailing relative for not shitting themselves at the dinner table. There are the makings of a decent band here if the people involved cared enough. But they probably don’t, and despite a couple of green shoots, this is a dreary affair.