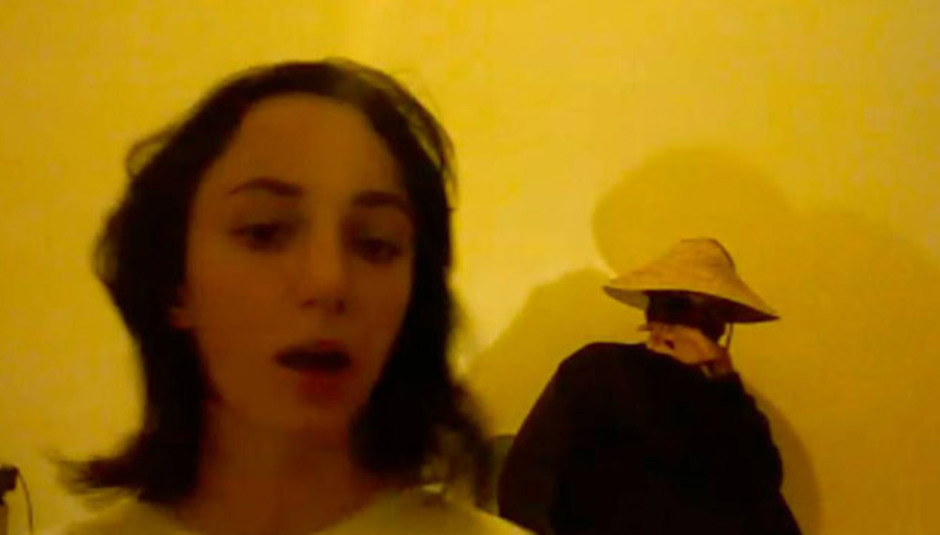 Welcome to the latest edition of armchair dancefloor, where we take a swift tryst round the twisted copper wires and fried circuits of this month’s electronic and experimental music releases.

In lieu of a guest mix, here’s instead a small selection of some of the best recent free podcasts & mixes from across the web.

Oneman – Mix for LuckyMe: In which the DJ extraordinaire and head of 502 Recordings puts together a mix that seamlessly gathers together the disparate corners of the current dubstep melee, while skillfully avoiding heading down irritating ‘post’ and ‘future’ cul-de-sacs. While there’s a great deal of dull, identikit two-step and broken house being made at the moment, this is a good reminder that ‘bass music’ is still in a rugged state of health.

Pinch – RA.247: As one of dubstep’s original innovators, Bristol’s Pinch has continued to push its boundaries outward. Since getting involved with Loefah’s Swamp81 label, he’s begun to explore its slower tempos and dense electro thrum; this mix is a great document of the Swamp sound, and of Pinch’s ongoing relevance in an increasingly wide-open scene, traveling from the junglist crunch of FaltyDL’s ‘Hard’ to Illum Sphere’s ghostly ‘Dreamstealin’, via a heavy set of unreleased dubplates. See also: Swamp81’s Boiler Room session, featuring sets from Pinch, Loefah, Addison Groove and Boddika.

Traversable Wormhole – RA.245: There couldn’t really be a more appropriate name for the rippling, claustrophobic techno of Adam X’s Traversable Wormhole project. This mix is as intense as you’d expect from a tracklist that includes himself, Luke Slater, Ben Klock, Redshape and Surgeon.

Micky nakedlunch – Mix for Futureproofing: Along with Swamp81, the [nakedlunch] label has been ferociously consistent thus far in releasing hybrids that don’t quite fit anywhere else. Label head Micky recorded a brilliant, house-leaning mix for Futureproofing featuring unreleased gems from the likes of Instra:mental, Boddika, Peverelist and Joy Orbison. That there’s a considerable amount of (ahem) hype accumulating around Hype Williams should perhaps come as no surprise; amongst other things, they’re a fair musical embodiment of an increasingly self-referential online world, melting chopped ‘n’ screwed Pokemon chatter and alienated YouTube drawl into frostily beautiful synth sketches. One Nation, their third album in a year, further refines the sound they’ve swiftly made their own. There are no surprises here per se, no dramatic shifts in the duo’s approach, simply an increasingly sophisticated ability to fuse the disparate elements of their sound into a coherent whole. So the abrasive New Age-isms of ‘Ital’ dissolve seamlessly into the fatalistic monologue that underpins ‘Untitled’, and the wonderfully titled ‘Your Girl Smells Chung When She Wears Dior’ sends the vocal from Cassie’s ‘My Addiction’ into tortured orbit around a gaseous backdrop that wouldn’t sound out of place on a Brainfeeder record.

There have been considerable, mostly inaccurate, efforts on the part of some commentators to place Hype Williams into some sort of imaginary H-Pop lineage stemming from James Ferraro/Oneohtrix et al; One Nation further confirms that their music, as in thrall to the passive/active aggression of UK nuum sounds as to post Dilla hip-hop and film soundtracks, stands as far from that canon as the distance that spans the Atlantic. Drexciya/Dopplereffekt man Gerald Donald has operated under a bracing number of pseudonyms during his musical tenure – Zwischenwelt is his latest, as part of an internet-catalysed group of electronic experimentalists aiming to explore themes of paranormal and psychic activity. If that all sounds a bit lofty and arch, it is, to a certain extent – but then Donald is nothing if not a conceptualist. Musically, the group lock into chilly coldwave and electro grooves, Beta Evers’ ice queen vocals playing tag with drums that cut notches in the album’s metallic sheen. The track titles – ‘Telekinesis’; ‘Enigmata’; ‘Segunda Realidad’ – give some clue as to its preoccupations, but one of the album’s major downfalls is that the concept never feels as though it fully owns Paranormale Aktivitat. It functions as secondary to the music itself, which shudders along with little regard for listener comfort but a certain haunted charm, as if giving voice to the ghost in the machine. You know what you’re getting with Kompakt’s Pop Ambient series, for the most part, but then that forms a great deal of its ongoing appeal. This year’s edition delves deeply into melancholy zero-gee psychedelia, with Bhutan Tiger Rescue (aka. October and Ewan Pearson) caught adrift in an open analogue ocean on ‘Beginner’s Waltz’, and Jurgen Paape’s ‘Ein Schoner Land’ effortlessly beautiful, all buoyant wisps of brass and vocal. Crato’s ’30.6.1881’ is an understated highlight, little more than a menacing industrial grind and the merest ripples of melody implied through stacked overtones. Best enjoyed on a long coach journey through the chill February evening, or played at deafening volume through a pair of decent headphones. There’s been much love for Kassem Mosse here at armchair dancefloor over the last few months, what with his accelerating and unerringly consistent release schedule (the decayed beauty of ‘2D’, from his recent Kinda Soul 12” has been on particularly heavy rotation since its release at the end of 2010). This one marks ‘merely’ another essential addition to his back catalogue then, and his first on Workshop since the choppy electro styles of the label's eighth release. All three cuts here are slightly faster than his usual smacked-out deep house pulse, lending the EP an increased urgency that’s only exacerbated by the fucked nitrous stammer of the A-side’s vocal sample; just as druggy, but given a quick blast of adrenaline/amphetamine to enhance the buzz. This one’ll sell out quickly, as Workshop 12”s tend to; grab it fast, before it disappears. Given his label’s former involvement with rapid-fire breakcore and jungle-influenced sounds, it’s unsurprising that Planet Mu’s Mike Paradinas has latched onto Chicago’s footwork/juke sound – it shares the same sheer unrelenting intensity and purity of vision. But despite its incursion into dubstep circles via converts like Addison Groove and the legion of videos footcrabbin’ out of YouTube, it’s often been difficult for UK listeners to pick up a sense of footwork’s local context. The label’s recent Bangs & Works compilation went some way towards redressing that balance after the exhausting sprawl that was DJ Nate’s Da Trak Genious; DJ Spinn’s ‘2020‘ was particularly worthy, eschewing frantic vocal samples in favour of Blade Runner-ish sci-fi noir. His new EP for the label shares its careful balance of muscle and subtlety, bringing an R’n’B-ish ear for melody to the fore on ‘Studio’ and generating all-out dancefloor tunnelvision on ‘Fall Back’. Along with DJ Roc’s The Crack Capone, it’s the best of Mu’s footwork imports so far. Swamp81 are going to own dancefloors this year. It’d be hard not to, when they’re putting out some of the most propulsive sounds to emerge from the dubstep/bass/whatever-the-kids-are-calling-it-today morass. Last year, it would appear, was merely a primer for the main event: as well as upcoming sounds from Addison Groove, FaltyDL and the semi-anonymous crunch of ‘Sicko Cell’, they’re releasing a raft of material from Boddika, one half of Instra:mental. On the evidence of these two tracks, and a host of other dubs floating around, his drum machine acid sound falls somewhere in between four major pillars of dance music – house, techno, electro, dubstep – without actually declaring total allegiance to any of them. That’s largely a good thing. ‘Underground’ ripples, snakelike, around an unsettlingly fluid broken beat, occasionally snagging against cascading arpeggios and subtle breaks in pace. ‘Electron’ is the front seat driver of the two, all throbbing jungle bass and Drexciyan electro rattle. One to keep a close eye on in upcoming months. In advance of his upcoming album on Planet Mu, You Stand Uncertain (which will be covered here in more detail next time round), New York’s FaltyDL has put out another beguiling slice of beat science on Ramp. ‘Hip Love’ is among the best tracks he’s yet put his name to, setting slow elements adrift above beats so busy they blur into a relaxing whirl of noise, and in doing so pulling off a trick beloved of junglists like LTJ Bukem and Source Direct. The result is oddly soporific despite its percussive intensity, and equally affecting, with ribbons of female vocal hanging suspended like oil in water. More thoughts, if you’re interested, are here, in a longer piece I wrote for Always Everything. Hessle Audio is that rare thing: a label in current mutant bass circles that operates with a clear, hype-free vision, both intrinsically connected to the dubstep scene that spawned it and refreshingly irreverent. It helps that two of its founders, Pangaea and Ramadanman/Pearson Sound, continue to fly the flag for the grey regions where dubstep acts as catalyst to spark interaction with other electronic sounds. The former provides the label’s latest, typically excellent, pair of tracks, a subtle step down in pace after the latter’s ‘Blanked’ strafed clubs at the end of 2010. There’s no drop in intensity however; ‘Inna Daze’ is springlike tension crystallized, gradually wound up through dreamy repetition over its seven-minute length. ‘Won’t Hurt’ releases it all in one go, in a flurry of brittle snare hits and whirling strands of melody. UK funky has ended up a far more amorphous entity than initially expected – after a frequently brilliant and promising set of grimey early singles from people like Roska, Crazy Cousinz, Ill Blu and NB Funky, it largely dissolved into soca-infused dubstep and house variations. Those producers still making ‘pure’ funky (whatever on earth that means) seem increasingly unconcerned with sticking to any rigid idea of what it ought to be. Scratcha DVA’s Hyperdub output is one such example; Funkystepz are another. Tapping into an elastic, abrasive groove where house meets grime, ‘Fuller’ and ‘Hurricane Rhythm’ impress through sheer functionality; through a big system their momentum is infectious, all hip-swing and strutting sexiness. You can almost taste the pheromones as they hang thick in sweaty club air.

Rory Gibb co-edits Always Everything, a webzine devoted to the hazy regions where borders between genres (or lack thereof) break down entirely.