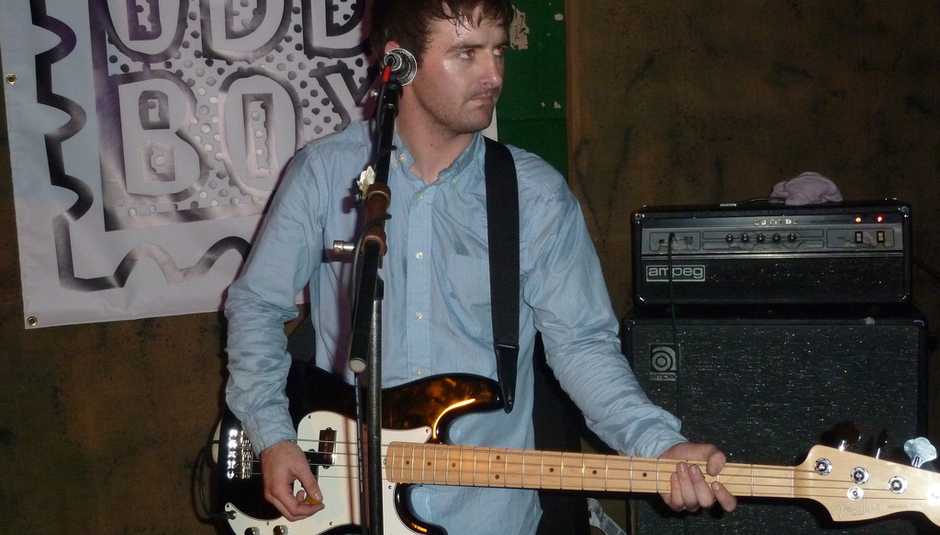 San Francisco three-piece Weekend first came to the attention of DiS late last year courtesy of their excellent debut long player Sports, to which we awarded a more than satisfactory 9/10 in the process. Although school friends Kevin Johnson (guitars) and Shaun Durkin (bass) (main picture) had been toying with the idea of forming a band for several years, it wasn't until the addition of drummer Abe Pedroza at the back end of 2009 that things started to fall in place. Having played numerous low-key shows in basements and bars around San Francisco's underground scene, the emergence of first single 'Youth Haunts' in the early part of last year started the ball of anticipation rolling, combining the reverb-drenched dynamics of My Bloody Valentine with the aural ferocity of A Place To Bury Strangers or Nine Inch Nails. Currently on their first European tour, DiS caught up with them prior to the final date of the English leg, and found a band still visibly overwhelmed at the response they've been getting from wider shores...

DiS: How did the band start?
Kevin: Shaun (Durkin) and I knew each other from 6th grade at school, and we started playing in bands together and talked music a lot. We'd always intended forming a serious band after we finished our studies at college so after our old drummer left it sort of left the door open for Abe (Pedroza) to rejoin us.
Shaun: I guess that doesn't make sense....basically, me, Kevin and Abe actually started playing together in 2005 but he left to do other things and then school kind of got in the way.
Kevin: Abe was playing with another band at the time but then he started playing with us again in the late half of 2009.

DiS: What influenced your musical direction and sound?
Kevin: We all have very different tastes. The one thing that bonds us all is post-punk really I guess, bands like Joy Division, New Order, The Cure and Magazine. I think our sound has developed quite rapidly in the short time we've been taking the band seriously.

DiS: An early quote on your blog states "Weekend have the ferocity of punk, the drama of shoegaze, the ambition of Springsteen and the textures of noise". Do you still stand by that?
Kevin: I said that a very long time ago! I'm not sure about the Springsteen bit either.
Shaun: I think it was more about trying to explain we have a lot of ambition. Too many groups these days are afraid to be up front and aggressive. From the beginning it was something we always set out to be.

DiS: Do you consider yourselves as being a part of the shoegaze scene or do you tend to look beyond all that?
Kevin: I don't consider our music to be shoegaze really. I think we've more in common with punk, certainly in terms of the coarse nature of what we do. Sure, the music can be atmospheric, but that's as near as we get.
Shaun: I don't see Weekend as a shoegaze band either. I think we're pitched somewhere in between My Bloody Valentine and Nine Inch Nails, musically anyway.
Kevin: There's more of a focus on texture than with the latter but primarily I think a lot of the riffs were developed via a shared love of post-punk groups more than anything else.
Shaun: Most of the shoegaze bands I do like seem to have been heavily influenced by post-punk, people like Ride for example.
Kevin: Even My Bloody Valentine don't fit the hazy, dreamy shoegaze template as far as I'm concerned. When we saw them it was the loudest, most in your face show I've ever witnessed! That's kind of what inspires me about shoegaze, bands with that attitude and feel.
Shaun: These days, music listeners are so eclectic that I think we just tend to get thrown into any indie genre.

DiS: Moving onto your album, Sports, which first brought you to our attention here at DiS. How long did it take to record and were you expecting such widespread praise?
Kevin: It took us about a year to record. We did it in little two-day sessions every couple of months, mainly basically we didn't have enough material to fill an entire album's worth when we started making it.
Shaun: What I think 's cool about Sports is that we started writing most of that stuff before we had a record deal, before we had anything really as a band in fact. It was just kinda like us, in a room, playing....we've always had ambitions but there wasn't a real context for where the music was gonna end up, and I think that translates into the rawness of the record.
Kevin: In terms of reviews, we didn't expect that many people to even hear about it let alone like it, so it's all been totally unexpected, but great of course!

DiS: The album seems quite dark in places, songs like 'Coma Summer' and 'Youth Haunts' in particular, while at the same time being lyrically inaudible in parts. Was that a deliberate intention of yours in order to create a certain type of mood or feel with the record?
Shaun: I don't think there was any particular direction when I was writing lyrics. What I really didn't want it to end up like was being a narrative record. I've never been a fan of songs that repeat a sequence like "this happened, then this happened, then this happened..." and so on. It's just about setting a mood and then keeping with the flow. In terms of the vocals I think that's the most shoegaze aspect about Sports. When I listen to records like Souvlaki by Slowdive or Isn't Anything by My Bloody Valentine the vocals create the ambience on so many levels. I've always been a big fan of textural sounds and the ambiguity it can lend.

DiS: At the same time there's a brutal harshness to your sound in places that must make you a producer or soundman's nightmare at times! How difficult is it to replicate live?
Kevin: We have been kicked off stages before!
Shaun: It can be tough because the stage volume is so loud, which is how we pretty much recorded, but then when you have all that going through a microphone, and then connecting with three reverb pedals all coming out of the monitors at the same time it tends to create this loop of shit that leaves soundguys trembling! I don't know though, I guess there is no right or wrong to do what we do, and every show is like a further case of trial and error.
Kevin: One of the great things about learning as a band is being able to adapt your sound to new environments. We've played in basements, house parties, tiny bars and clubs...all kinds of places really, so we could crank the whole thing up as loud as we wanted. Now we're playing in bigger venues it's quite a challenge working with professional sound people because it can be quite frustrating yet at the same time they can make us sound quite amazing.
Shaun: We'll still play basements though. If you can play in a basement you can play fucking anywhere!

DiS: You got signed to Mike Schulman's (formerly of Black Tambourine) label Slumberland Records. How did this come about?
Kevin: We're all huge fans of pretty much every band that's put a record out on Slumberland. When we started playing and we were fantasising about getting signed to a label, Slumberland was always around the top of that list.
Shaun: I remember you joking about it that one day Mike would hear us even though the website said they weren't accepting demos, and that's pretty much what happened. He heard our demo and ended up coming to us.

DiS: Both labels you've been associated with - your first single came out on Mexican Summer Records - have an excellent track record in recent years of discovering raw, untapped talent.
Shaun: Mexican Summer were really cool, because they were the first people that gave us the opportunity to put a record out, and their involvement undoubtedly played a major part in us getting our foot in the door as it were.

DiS: You played several shows with The Pains Of Being Pure At Heart at the back end of last year. How was it touring with them and did you learn much from the way they operate as a band?
Kevin: They were great people to be around, really casual, and they're excellent musicians as well. I think we learned a lot about touring in general from them. It was the first time we'd ever been out nationally and they made it pass so easily, almost like an adventure in many ways.

DiS: You're currently playing in the UK for the first time, having played three shows with post-punk legends Wire earlier in the week. How did you get to support such a prestigious band on your first jaunt over here?
Kevin: I guess we really have to thank our booking agent over here for getting us those dates. There aren't a lot of bands we really feel that comfortable supporting so when we were asked to do the Wire shows it was a real honour. They're one of the few bands from that whole era who still play with a lot of integrity, loud and confrontational as ever.
Shaun: We were talking to Graham (Lewis) from the band and he said that out of all the bands they were offered for those dates we won by leagues!
Kevin: It was really interesting seeing their fanbase, especially in the UK which was just so dedicated. To see these people of all ages singing along to every song was phenomenal, and I think the fact most of them arrived really early meant they got to see us as well, which was cool.
Shaun: A lot of the older punk guys brought their daughters, so I guess you could say we were something for the younger generation at the shows to enjoy!
Kevin: The bricklayer dad, and the University daughter! It was like the third generation punks playing to those that survived the first one!

DiS: Your brief UK tour ends tonight. Are there any plans for you to return in the foreseeable future?
Kevin: Yeah, we're hoping to come back over in April, all being well.

DiS: Finally, do you have any more releases planned in the pipeline?
Kevin: We're putting out a video and seven-inch single for 'End Times' off the album, and our friend Speculator from LA has done a remix of 'Coma Summer' on the b-side. He's turned it into this cool krautrock jam.

DiS: Are there any other bands on the San Francisco scene you think we should be checking out?
Kevin: Terry Malts for a start. They have a seven-inch coming out on Slumberland as well. Wax Idols as well, and our friends Tamaryn too.

For more information on Weekend visit their MySpace, Facebook, Wordpress or Last FM.

"A lot of the Western world is just m...