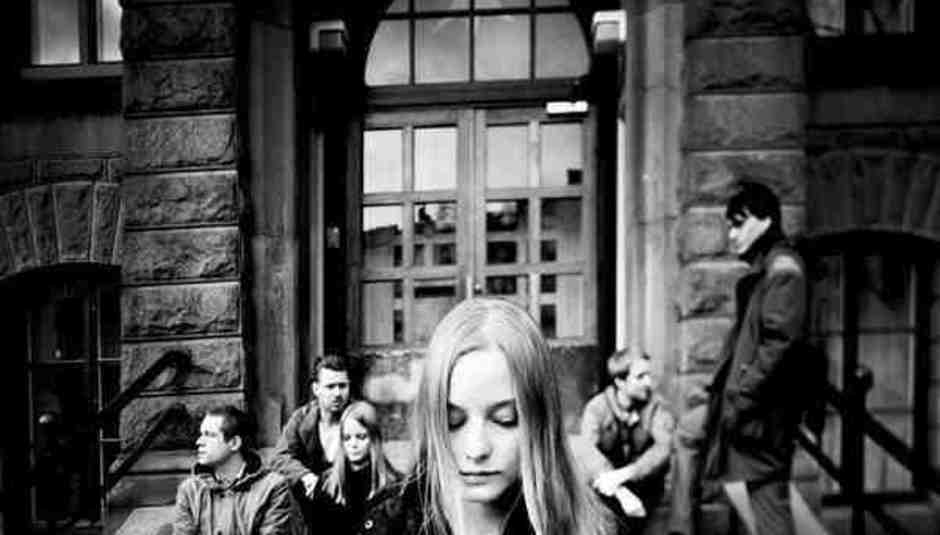 A warning: this week the number of wicked new sounds is in inverse proportion to the number of mangled analogies used to describe them. All this means is that there is quite a lot to get giddy about.

I will not lie, it is easy to become disheartened and not a little bored when you have been sent free records for heaps and ages and they still will insist on arriving at your house with words like ‘SORROW’ written on them - twice - in black, capped alphabets. And it’s not like Indie isn’t trying, it’s done its hair and it is wearing a nice winter coat that makes it look all handsome. ‘Hi, can I come in?’ it salvos - but you have the door on the chain; stubble-chopped Pop is in the dining room with its boots on the table, it is drinking Cinzano and eating all your peanuts one at a time, flicking them up in the air and catching them in its flushed and rashy mouth. ‘Do me a favour, love,’ it bellows from its perch, ‘Whajoowanna havvim rand ere fowar?’ And it would nearly be right - I mean, ‘SORROW, SORROW’ is a fine title when misery is your bedfellow, boss and brethren, but sometimes the world isn’t like that. Sometimes it is made from blindingly primary yellow roses and buttered white, hot toast for every - snatched - repast.

However - and how lucky for we - ‘Sorrow, Sorrow’ is not a wallow; it does not want to drag us through hedges leafed with torment, and it does not want to show us the first edition Camus it once bought in a Parisian back alleyway. Because even though it wants to sing us a song about trying and failing to get rid of its demons, it wants to make said song sound like angels; angels that are dipped in honey, the sort of honey that unlocks locks.

Having wisely dispensed with the waft, Toro Y Moi is backbackBACK this week and he is bringing the bass with him like he had it in his pocket all along; the sly old dog. In many ways, this is the bounciest of toyshop balls made manifest, with a bassline of irresistible vim and verve providing a sturdy climbing-frame for all the noodle to lark about on and hang off of with one arm. All you need to know is that it is lush to hear sounds like this from one like him, it seems to indicate there is something in the gameplan about racking up points by demonstrating he has range; and that not all chill-some, girly-boy vocals need to be backed or accessorized with cascading rainbow reverb and foggy production and kaleido-synths. Well done Toro Y Moi, you have made us a funk workout! We didn’t know you had it in you but it is all very hurrah.

Young The Giant’s lead singing man has one of those voices I am afraid to say I find impossible to resist, there is a lot of tasteful yearn going on. And though I hate to make a point of saying anything is beautifully composed or recorded, ‘Apartment’ really is, it has FM written all over it but it stops short of ANFEM or EPIC because that would be dread, I couldn’t forgive it. Big Indie like this often gets overlooked for being comfortable enough in its own skin to give you all its bulged arteries with both barrels – a mixed metaphor I make no apologies for because I like their single, I would play it in a CAR and me and my best girlpals would sing it LOUD even as our boypanions were reaching for their Kraut compilations and thereby making us wonder a) why we brung them in the first place and b) if we can ditch them at Newport Pagnell.

Visions of Trees’ videothing is mega modern, it has concrete hoodlums and well bad drugs and fights and that. I think this is a bit of a shame because ‘Sometimes It Kills’ is accomplished and wrinkle-free graceful pop that doesn’t upset any horses but isn’t any less boring for its breathy meandering. Hopefully the title does not refer to a doomed romance in which someone got themselves deaded by trying to have Too Much Fun in an unorthodox and illegal fashion - because that would lend this the air of a needy soap opera when Visions of Trees don’t sound like they really need those kind of gimmicks. In the end, this is not a record that will make anyone say ‘When I heard ‘Sometimes It Kills’ in 2011, my life changed irrevocably and forever,’ but I suspect I may be a bit greedy in expecting every single seven to do this.

Okkervil River do not believe in neat starts – I mean, why start a song with a laser-sighted intro when you can spend at least thirty seconds tuning up and making cursory plonks at instruments because you are a REAL BAND. And though ‘Mermaid’ is not as fizzy as a fillum with Darryl Hannah and Tom Hanks in it; and despite my aversion for ack-making music this week, lord only knows 'Mermaid' is darned affecting. In tenor, it is not unlike Smog’s absolutely tremendous ‘Vessel in Vain’, so do be warned, this is almost guaranteed to put you in a ponderous mard of pondering ponder. But a very classy mard all the same. I think it is really and actually a song about pulling a dead lady out of some water. OH SWEET JESUS OKKERVIL RIVER, JUST NOT TODAY, ALRIGHT? I MEAN, IT’S MONDAY.

Young Magic - ‘You With Air’ (Carpark)

Sometimes you walk into a room and it is all you can do to keep up forward momentum, please not this, not all these messy people, not now, Dog. ‘You With Air’ is a bit like that, it is gloopy and treacly and there are children in a playground playing high-spirited, kiss-based chasing games as they try to work out what the point of men and women and bothtogether is. Young Magic is dead set on stopping you from thinking about anything else while you listen to his single, he is absolutely determined you look into his eyes and his alone - and the whole excursion is furious, intoxicating. Mostly it is the boom of the synths that have had all their plastic stripped away; his keyboards are made of wire wool, I think. To listen to this is not unlike putting plugs made of bumble bees into your ear canal; it is sinister, furry, too unsettling to be cute but overall a strange and heady pleasure. Ace.

Cold Mailman’s People wrote to me with a plea for romance, they are absolutely sure this is the song the people of indie should send to their dearhearts if they really want to win them next week. So while everyone else is playing Competitive Couples in vile Pizza Express-o-likes up and down the land of Britayne, maybe you could be the dude who proffers this, wrapped in the finest ribbon you can purloin from Lewises, and accompanied by a postcard that is either kitschily amusing or romantically old - because when something is well old that automatically makes it good. I always think hedging your bets is a good idea, so a Magnetic Fields lyric with a slight prickly double meaning could serve you well here. As for the single, I am happy to report that it is – all smart-arsery aside – the softest of peaches, being a deftly written twinkle of a pop tune that should convince the hardest of hearts. I am also quite smit with the idea of any song whose central tenet ‘Fall in love with me, right’ is given in the form of a polite command. I have never taken well to being told off or bossed about - but when it sounds this damnably romantic, I hardly mind at all. Delightful.

Wendy is on Twitter, here. This week she has been mostly formulating an unpublishable treatise on Age of Adz - the general thrust of which seems to be that Sufjan Stevens finally made it because he finally had a proper shag. Vulgar.