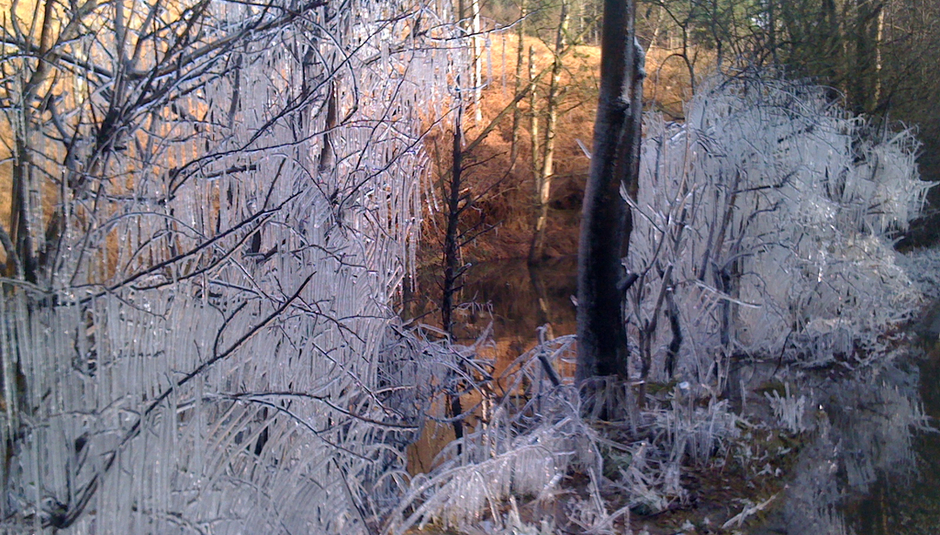 Thomas from Esben & the Witch talks us through the artwork for Violet Cries.

We arrived in fairly mundane fashion, a white van full of dust and crumbs. It was late January, cold, sunny but without snow and we were about halfway through a short tour of the United Kingdom. Snake’s Pass is somewhere between Sheffield and Manchester, various acquaintances had suggested that it was a place worthy of visiting or at the least driving the white van through.

We drove out of Sheffield and the houses and shops dispersed gradually. The road became thinner and began weaving slowly through hillocks and rock outcrops. Snake’s Pass is a quite spectacular place, often on one side the ground drops away entirely revealing sheer drops to valley floors. In places man made reservoirs span the horizon, in others rivers naturally carve their own courses.

At one point the baron expanses gave way all of a sudden and the road turned in on itself and descended sharply into a well hidden hollow. Here the sunlight didn’t reach and in the shade of many broken tree’s a pool of water stood covering one lane of the road. Cars and other white vans had, and in fact still were, speeding through the pool and in doing so spraying the snapped branches of the surrounding trees with water. It froze on the branches. Icicles had formed all around the pool. Huge at the base of the trunks, smaller and more delicate the higher you looked. With a surprising amount of difficulty we span the white van around and drove back to the hollow to look closer. It exuded a cold and hostile chill but was thoroughly wonderful and totally at odds with the land that surrounded it and stretched away in all directions. We stayed for a time, obliging passing motorists by taking photographs for them on their phones which they trustingly dangled out of their windows as they passed. The image that eventually formed the basis of the album cover was taken by our good friend and self titled Loyalty Officer Welland. A fair amount of time passed between the photograph being taken and the final decision to use it as the cover being made. Having said that it always seemed an inevitability that the picture would be used.

The image, as is abundantly clear to anyone who ever lays eyes on it, has been run through Photoshop. This procedure is one we often find ourselves undertaking. Rachel generally oversees it which tends to entail her creating many, many versions of an image, each one almost imperceivably different to the next. Daniel and I then trawl through them looking for the one we feel works the best. We edited the colours of the image to create what we felt was an otherworldly feel, we find it interesting how some swift sleight of some technological hand can transform a picture and its character. In this case we felt only some minor adjustments were needed as we deemed the original image so striking.

We have always felt inspired by landscapes like this one. Not in a direct sense, more in the way that they move us to write but this scene in particular seemed to fit the record for an altogether different reason.

When we wrote Violet Cries we were fascinated with shifting dynamics within songs. We were interested in experimenting with how softer parts sat next to more raw, visceral sections of tracks. It seemed to us then, as it still does now in fact, that by switching between the two without warning it added significance to both. It meant that a simple, beautiful guitar part would sound all the more beautiful if it emerged, suddenly, from a wall of synths and wails. Whilst I’m certain that this is in no way particularly groundbreaking it was an important discovery for all three of us and shaped much of our subsequent songwriting. The image on the album cover and the landscape that informed it seemed to mirror this idea, the abandoned expanses closing in rapidly and culminating in this one dark and claustrophobic space. One extreme accentuating the other.