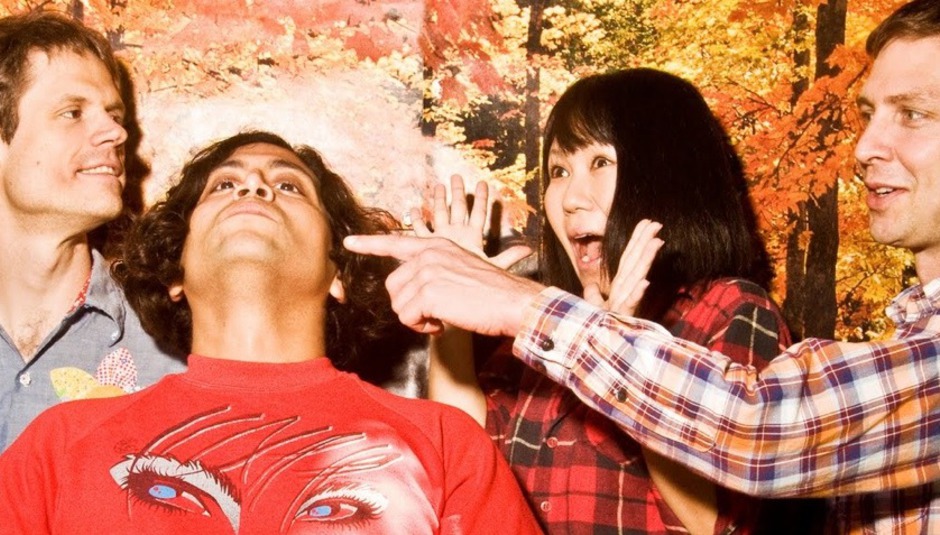 As part of our special Deerhoof takeover day, Satomi Matsuzaki and Greg Saunier have done us their track by track director's commentary-like guide to their new album Deerhoof vs. Evil...

Satomi: Our first Catalan song - and apparently hardly anyone else has made original Catalan songs for looong time. A Spanish friend, Jose Ros, helped me translate over Skype when I was in Ed's house, recording. I stayed up overnight with him over a few days. I was a real "Light Sleeper" then. After the mix, Jose played the song to a few Catalan people and they thought I was from Majorca where they have different accent from mainland Spain. Ha!

Who Sleeps, only Dreams
light sleep, dracula.
i don't want to sleep too much.
night, day, it doesn't matter.
little rest is not bad.
life lasts little.
is it true?
is it not true?
sleeper of light sleep.

Behold a Marvel in the Darkness

Satomi: Love grows and fades.Darkness and shadows of relationships...High to medium to low..or other direction.We are emotional sensitive animals. Grrrrrrl...Prrrrr....Surfy melancholic guitar calms the ocean. Poker face keyboard and cold hearted vocal melodies drift away your tears..float and disappear when time passes. Smile people! Get busy!

Deerhoof - Behold a Marvel in the Darkness by Polyvinyl Records

Satomi: Those cars with super loud subwoofers, they frightened me at night. The sounds present nightmares, fears and darkness. Still I am attracted to them. I play bass to overcome my own fears for loooooowwww heavy frequencies. It's interesting how all the parts are woven in this song. I love Greg's drumming on this one. A bit behind the beat, silences, feel the air, rhythm is leaded by guitars. Imagine going under terrible storm. Thunders, rain, can't see an inch ahead. Then what can we do? Fear goes away. Calmly I am gonna just sing to pray...

Deerhoof - The Merry Barracks by All Tomorrows Parties

No One Asked to Dance

Greg: Ed made a demo of this one by himself. Honestly it sounds a lot like the final version. We were like "this is perfect". Learning to play it has been another matter. Now we have a live version with drum and everything. I made the vocal part and the lyrics. Usually I struggle with lyrics but for some reason these ones just came to me in a flash! Wow! Then I showed them to Satomi and she sang it into the microphone in one take and it was done. If only all songs were so easy!

Deerhoof - No One Asked To Dance by Polyvinyl Records

Greg: Well I could try to sound like a smarty-pants and give details about the Greek movie this came from and the activist hero that wrote the song, but I've never seen the movie and the finer points of Greek politics sometimes elude me. A friend of mine from the band Dymaxion played this song for us once and we all loved it so much, we decided to try to add it to our repertoire. Ed's guitar sounds like an organ but it's a guitar. The version on the record is actually a studio version and a live version piled on top of each other!

Satomi: Good and bad title, made up by Greg Saunier. I love this song! Rave pop rock! Reminds me of 80's neo romantic music..."Me to the rescue!" I am gonna come to rescue you! "You to the rescue!" Please rescue your friends who are lonely...”

Satomi: Train arrives from far away. A lady in a white wedding dress comes out.She tells a groom, "Don't marry me". John's ghostly low whispering voice answers. Sweet, calm and cruel. How innocent and complicated we are. Let's celebrate our failures. Snow magic can cover them up and we can start from scratch. Singing out loud is the initiation for new "you”.

Greg: Eh... My love of Keith Richards is not always encouraged by those around me. But when I am honest, when I am writing my own version of "Life", I have to say that whatever blinding flash hit KR when he was kid hearing Elvis and Chuck Berry for the first time, well that's what happened to me when I heard HIM for the first time. He stuck a musical puzzle in my head that I'm still trying to work out. I wrote this song and played the guitar myself. I'm not a bad Keef imitator am I? Come on now tell the truth! Ed played drums.

Satomi: I wanted to say "I can" many times so I made this song. Positive attitude rules! If I can, you can.

Greg: Such a beautiful song by Satomi. I was in Oakland in John and Ed's practice space, playing drums by myself while they were out having dinner, living the good life. Good vegetarian life. I, monk, tried to perfect my New Orleans beat. Hit record at some point. Sent the drumbeat to Satomi who was in Tokyo. She played the drumbeat mp3 on laptop speakers and pressed record on a cassette walkman from the 80s. Did this mysterious and haunting bass and vocal. Sent us an mp3. We freaked out.

I Did Crimes For You

Greg: I wrote this song for Adam Pendleton's documentary BAND. An amazing three-screen extravaganza based on Godard's Sympathy for the Devil, but with Deerhoof cast in the role of Mick and Keith and the gang. The lyrics combine bits of dialogue from Godard's revolutionaries, and something a concert promoter in Helsinki told me once after she put up Deerhoof posters in all sorts of contrary-to-protocol locations around town: I did crimes for you! The doc shows us recording the song and looking respectable because Adam wouldn't let me wear my Stones T-shirt.

Deerhoof - I Did Crimes for You by Polyvinyl Records

Greg: Lonely character sings from behind banks of keyboards about World War Three and not knowing how to have fun audience… not listening…