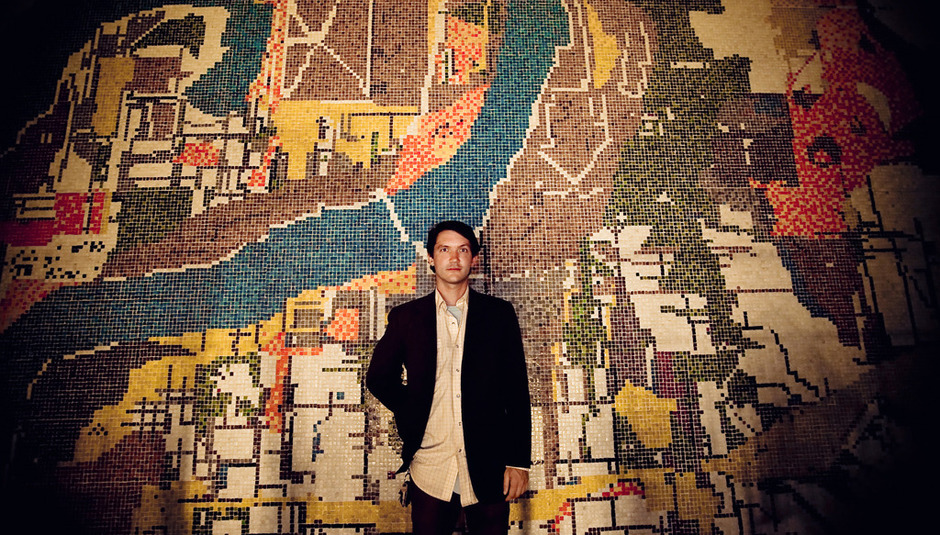 Last year’s The Game of Monogamy saw Omaha, Nebraska’s Tim Kasher take some time out from leading Cursive and The Good Life to turn in one of his most richly detailed, personal and accomplished albums yet (and when you have such searing works as Domestica, The Ugly Organ and Album of the Year under your belt, that’s not a statement to be taken lightly). Peopled by a cast of disillusioned and gradually ever-more dissolute thirtysomethings struggling to maintain a sense of happiness in a world they don’t quite fully understand and packed with spiky, expansive arrangements, it picks up on some of the themes that ran through Cursive’s last full-length Mama, I’m Swollen, such as maturity, self-worth and desperation.

Yet Kasher’s lyrics never tip into the oppressive or the wantonly bleak. His sometimes maudlin nature is leavened with such melody and wit that listening to his music doesn’t, for example, lead me to “feel utterly unnerved about the survival prospects of any romantic relationship,” as a recent blog post by the A.V. Club postulated. Rather, I get the impression of a weather-beaten romantic, one who’s been disappointed and let down so many times (often by himself) that cynicism and gallows humour seem the only sensible option.

We caught up with Kasher as he took a break from rehearsals in his hometown of Omaha and quizzed him on the album, his foray into scriptwriting, and what lies next for him.

DiS: Had you been wanting to put something out under your own name for a while?

Tim Kasher: Yeah, it’s something I figured I’d always do eventually, and the timing was right…it was something I wanted to do before I got too much older.

DiS: How did you find the recording process?

TK: It was a really great experience – there are a lot of good memories that I’ve already attached to it. We were way up in Whitefish, Montana at the time, and it’s already been a year since we were working on it, so now we’re enjoying ourselves, reminiscing about how great a time we had. It was really a unique experience. Very fond memories. Already!

DiS: How’s it been taking it on tour so far?

TK: We did a tonne of dates, it was the longest tour I think I’ve ever done, in the Fall. We were out from I think, like the end of September till mid-December, December the 18th. We had a really great band – we got pretty well-accustomed to it.

DiS: Were there any particularly memorable shows?

TK: We did a lot of dates opening for Minus the Bear, and we’re old friends, good friends, so that was a lot of fun. It’s not really coincidence that Aaron Tate, their drummer, was the drummer on the album. But what was really great for me was some of our own headlining shows, where we were really surprised to have sold-out shows, and it was a great response being the first time we went out.

DiS: The album’s very much concerned with the concept of monogamy. Do you, personally, consider it a pessimistic kind of record?

TK: I think I see it as…realistic. And yeah, it can be pessimistic, and ugly, and I know that. And there are people who want to be pro, always pro-relationships and not want to dwell on these kinds of topics. But there are people who…I guess it really depends on how you perceive it. I’m not out to change the game or anything like that; I just found it interesting to deconstruct what’s such a primary pursuit.

DiS: The song ‘Strays’ is probably the sweetest affirmation of a loving relationship you’ve ever written. But then sequenced straight afterwards is ‘Cold Love’, which kind of…complements it in a weird way, making it all the more poignant. Was that intentional, placing those two songs next to each other?

TK: Well, not necessarily – I mean, there’s a lot of direction and sequence to the album. Songs like ‘Strays’ and ‘I’m Afraid I’m Gonna Die Here’, I placed those together because they’re like, two sides of the same story. And ‘Cold Love’, I think that could go anywhere on the album, as there’s really not a narrative to it. It’s more just about how a long relationship can become…problematic.

DiS: ‘No Fireworks’ I kind of see not so much as pessimistic, more frustrated that things haven’t worked out the way you, or the character, would like.

TK: Yeah. I think that’s probably the way that I’d like that song to be perceived, it’s not that negative, it’s just an earnest couple that’s not actually working, you know. But it’s not for the lack of trying.

DiS: Going back to ‘Cold Love’ for a minute, did you enjoy making the video?

TK: Oh, I loved it. It was a really, really fun experience.

DiS: You did the whole thing yourself, is that right?

TK: Yeah, I guess that’s maybe one of the reasons the experience endeared itself so much to me, that I was able to hire myself [laughs]. It was a lot of fun.

DiS: Will there be any more videos for songs from the album?

TK: Yeah…I do really want to. I have an idea for ‘Bad, Bad Dreams’, but I’m trying to figure out a schedule. Hopefully.

DiS: I’d like to see it. Something that kind of ties in with the last Cursive record, particularly the last song [‘What Have I Done?’], is this state of getting older, being in your 30s and being compelled to continue writing, this idea of “writing another chapter.” I remember reading around the time of that album that you felt you had matured a bit – I guess it’s something you’re still concerned with on this one?

TK: Yeah, I tried to…keep that to a minimum, ‘cause it was elaborated upon on the last Cursive record. And so, I did want to keep it to a minimum on this record, but I did find myself very much compelled to make a few more comments on the idea. I guess maybe for my own personal joke, I put those songs early on in the album. Kind of like to get them done and move on. DiS: Throughout your career, with Cursive and The Good Life, you’ve often put yourself front and centre in your songs, and certainly the new album is no different, where you sometimes talk about yourself in the third person. It makes it difficult, sometimes, to view them just as stories. How personal is the whole thing?

TK: I…I guess I just feel like ultimately it’s not…I write these things that certainly, is a lot to do with catharsis. And I get kind of bored when writers talk about that – the catharsis of writing, through a band. Working through your own issues or your own demons and things like that. I find it weird, and kind of a boring thing to talk about, but I recognise the fact that I’m true to that. There is personal experience, but then there is a whole other stream of stuff to the listener, or the reader. And so, how personal it is isn’t…I don’t think it’s that important. It shouldn’t become important to know. I could ask that same question all the time with writers, with people I’m reading, how personal it all is; I wonder. But then I always try to remind myself at the end of the day, that it’s a novel, or an album. Maybe it doesn’t matter, because I’m taking it in in a way that it’s becoming something universal. To me. Anyway, all of this is kind of coming back to the fact that for me, I always reserve the right to say, it’s just fiction. [Laughs] Because it’s just safer.

But then, a friend of mine and I were talking the other day, about there are all these movies coming out ‘inspired by actual events’. But, you know, what’s not inspired by actual events? And I guess in that sense that’s…another offhanded way of saying, [laughs], these things are based on my own experiences, but I don’t have to hold myself to them, to that.

DiS: Are you still living out in California?

TK: No…I was living out there for a while, and I lived in Montana for a while, where I did this record, and I’m currently back in Omaha, Nebraska.

DiS: It was a few years ago now, but when you made Help Wanted Nights with The Good Life, it was intended as a companion piece to a screenplay?

DiS: Is anything happening there? I heard you had a bad experience with it.

TK: It’s such a difficult…there’s so much money involved. I’m still writing screenplays and I’m still; you know, it’s something I’m very passionate about and I’m still working on, a lot, but no, I don’t have anything on the way or anything. The film kind of fell through and I work so much on music, it’s tough to find a window to do it. But I see it as my personal, lifelong pursuit, along with music.


DiS: Have you ever thought…have you ever written anything in any other format, like for stage, or prose?

TK: Yeah, and again, it comes back to making the time to do stuff like that. Help Wanted Nights actually is a stage play, I wrote it as a stage play, but I haven’t…well, I’ll take these as words of encouragement!

DiS: What are you listening to at the moment? I’ve read that you don’t really listen to much heavy music…

TK: No, I don’t. I think that it’s so much fun, and I think it’s really fun to see live, but I don’t really bring it home very much. Lately I’ve been listening to, become a bit obsessed with Kate Bush. I’ve just fallen madly in love with her.

DiS: I remember around the time of Album of the Year you named Aimee Mann as a big influence…

TK: Yeah. Actually her latest album – well it was three years ago now – but that was a great record.

DiS: Are you reading anything at the moment?

TK: I’m reading Richard Yates, the guy who did Revolutionary Road, which is really phenomenal. I’m just getting into his other books.

DiS: And you’re coming to Europe soon, I think, to play some headlining shows, and a few shows with Iron & Wine and Bright Eyes – are you keen to come back over here?

TK: Yeah, I’m totally keen to come back, it’s been too long.

DiS: Have you heard the new Bright Eyes and Iron & Wine records?

TK: I haven’t heard Iron & Wine’s, but I’ve been listening to the Bright Eyes record. It’s great – everyone’s been really excited about it coming out for a while.

DiS: I’ve only heard ‘Shell Games’, and it wasn’t entirely what I expected…

DiS: Do you have any idea what’s coming up next for you, musically?

TK: Well, I’m touring this album for a while longer, and also, in between tours I’ve been writing a Cursive record.

Tim Kasher tours Europe in February with his band and Mexican Elvis; The Game of Monogamy is out now via Affairs of the Heart.

In Photos: The Cult @ Hammersmith Apo...