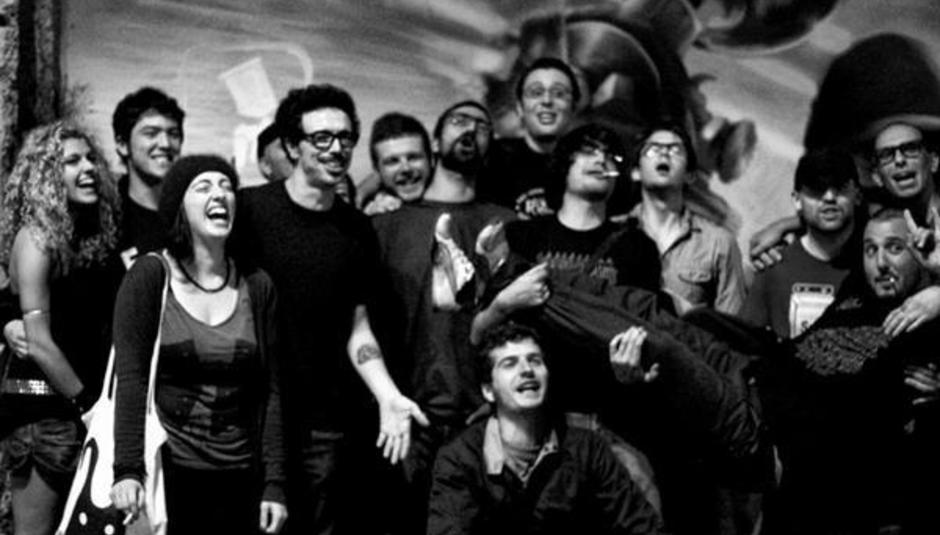 As regular readers (that’s all two of you) of this column will know, the last edition featured only American bands, something that I promised to make up for. With this column, it’s my intention to highlight some of the best, or at least most promising DIY bands active at the minute. It should be noted that this column represents my opinion only; should you disagree, why not leave and comment and tell me which bands I should have mentioned. I bet your mate’s one-man grind project could do with a push. I should also mention that about half of these bands feature ex-members of other bands. This is for two reasons. Firstly, I often find that if I like someone’s first band, then I’ll like their next band. Secondly, it makes for lazy journalism as you can simply describe their new band in terms of their old band. And if there’s one thing I love more then ‘ex-members of’ bands, it’s lazy journalism.

Our first band of the day is Crash Of Rhinos from Derby. Featuring ex-members of The Jesus Years and The Little Explorer, Crash Of Rhinos pretty much sound like a combination of their former bands. So that’s intricate post-hardcore riffs mixed with tricky math-rock drumming and a sprinkle of delicate post-rock quiet bits. Unfortunately they don’t have any recordings online at the minute, though their Myspace[http://www.myspace.com/crashofrhinosband] suggests an LP is in the offing. There are however a couple of songs available on YouTube, such as the one below. As you can see, they still have the same busy drum work as The Jesus Years, coupled with the twinkly guitar lines of The Little Explorer. The screaming/yelling element has been toned down, but the loud parts are still there, and have a kind of Braid feel. The guy on drums remains the focal point and is easily one of the best drummers I’ve heard. It sometimes seems like a copout to describe a band as having potential, but on the basis of what I’ve heard of Crash Of Rhinos they really do have a boatload of potential to be truly great. Watch for yourself.

The Coal Train are a four-piece band from Sunderland comprised of three ex-members of This Ain’t Vegas, plus another guy on guitar. Again, similar to This Ain’t Vegas in a sense, but the songs are more introspective and more relaxed. There’s still a spiky, Fugazi feel to them, but on the whole things seem a little more straight ahead and not as all over the place as This Ain’t Vegas were. ‘You And Him’ is built around a sweet little Victor Villarreal-style guitar riff, complete with mournfully crooned vocals “dreaming about you and him”. It’s very nice, and is hopefully an indicator things to come. It’s on their Myspace.

Our last ‘ex-members of’ band is Elk from Grimsby. Since you asked, they’re ex-members of The Green Acre, Winston, and Andy, Glenn and Ritch. If like me, you felt that Andy, Glenn and Ritch were at times a little too self indulgent in their constant noddle-ing and all the angular riffs and the stop/starts, then you’ll be pleased to hear that such tendencies have been reigned in. Instead Elk have gone in more of a post-punk direction. The stuff online seems much more song based (there are verses and choruses) and not so difficult for the sake of being difficult. Mostly they sound similar to The Van Pelt, though the song ‘Reading Habits’, which you can hear here, sounds oddly like Roxy Music’s ‘Love Is The Drug’. I’ve no problem with that, but Byran Ferry might decide to set the dogs on you. More music can be found on their website.

I’ve only recently got around to checking out Facel Vega, and I’m sorry that I left it too long. Facel Vega play a melodic, emotional strain of hardcore. The guitars are chunky, the rhythms are driving and the vocals are nice and hoarse. There’s an obvious Revolution Summer vibe to Facel Vega, they’re somewhere between Dag Nasty and Rites Of Spring. If you’re into the early Dischord sound, then do yourself a favour and check them out. They’ve done a couple of splits that are worth tracking down. ‘Long Way Down’ from their split with Harbour is total Rites Of Spring worship. Passionately teary eyed vocals, chiming guitars; it’s like Guy Picciotto et al upped sticks and moved to South Wales. Awesome.

Facel Vega also share members with the band Twisted. Twisted are based in Leeds, and like Facel Vega, they take their cues from the early Discord sound. Unlike Facel Vega, Twisted lean more in the direction of garage rock. They retain the feel of classic emo, with the straining vocals and the driving rhythms, but the guitars sound a lot more thin and overdriven rather than being chunky and distorted, and there’s some garage style stops and starts thrown in there for good measure. The influence of uber-obscure DC band Rain can be heard on the song ‘Relief’ from their Stockholm 7” on Art For The Blind records[http://www.artforblind.com/]. Frankly, any band that sounds like Rain has to be good. They have a split 7” coming out at some point in the near future with What Price, Wonderland?, who they also happen to be touring with in August. Dates can be found here.

Our last band of today is The Shitty Limits. They’ve been together for a while now but have had little coverage on DiS so it seems only fair to give them their dues as they’re easily one of the best bands in the country. They once turned down an interview with the NME, so I’m not entirely sure they’d give a fuck about getting their dues from DiS but we’ll carry on regardless. The recipe is simply: equal parts 60s garage, 70s punk and 80s hardcore with a healthy dose of DIY ethics. That’s The Shitty Limits in a nutshell. Their 7”s fly past in the blink of an eye, with most songs clocking in at the one minute mark, so there’s little room for any of the flair that most bands worry themselves with. Instead, The Shitty Limits get straight to the point. And that point is punk rock. Nothing more, nothing less. Their debut LP came out last year on www.lavidaesunmus.com, and whilst not as raging or ferocious as their singles it still packs a punch. They also share some members with The Spectres, who did a split 7” with Facel Vega, which kind of ties everything together nicely.

So that’s it for this column. I hope you enjoyed yourself. If you disagree with anything I’ve said or would like to tell me how I’m not tru punx, simply shout in the direction of your computer. Until next time, I’ll see you in the pit, or more likely, shit talking people on the internet. I’m looking at you Mike. BYE!