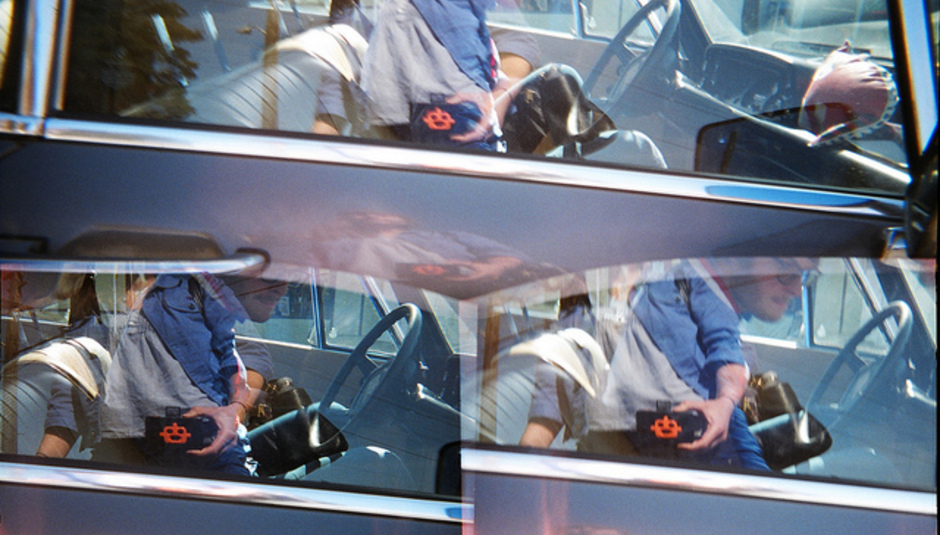 (The Pacific Northwest vs the North of England)

Kaleide is the second record we’ve made in Seattle, Washington. This return visit reinforced my notion that the North of England and the Pacific Northwest are rainy, melodic, kindred spirits. When we went to record The Golden Spike my suspicions were raised on our first shopping trip in the college district; five stores in a row were playing The Smiths. It was pretty spooky. Meeting Michael Benjamin Lerner gave my theory a face. Michael is the man behind the band Telekinesis, he assisted the recording of our first album (including dutifully putting lots of drums Nestor broke back together) and when Telekinesis play live he sings lead vocals and plays drums AT THE SAME TIME (ultimate musical voodoo). He and I are kind of like a pair of musical exchange students. I, a Yorkshire lass, followed my ears to Seattle (via John Goodmanson), and he, a Seattle-ite, followed his to Liverpool to study at LIPA, also spending a lot of time in The Lake District. I decided to put my theory to him...

KH: As a northerner arriving to the PCNW, I was struck by a familiar kind of friendliness; laid-back but with an underlying outdoorsy toughness, can you relate to that?

MBL: Absolutely! The North of England, and the North West of America are not so different at all! I think the landscapes really can depict the general vibe of the city. For instance, in New York, and most major East Coast cities in America, there is a completely different vibe. It's so very similar to the North / South divide in England. The laid back friendliness factor in Seattle is for sure in direct correlation to the terrain. And I think I am guilty of that LBF (laid back friendliness) due to my upbringing. It can become an issue when I visit cities like New York, I think I get eaten alive from my PacNW sensitivity sometimes! I'm not built for a city like that.

KH: We came to Seattle to work with John because we admired PCNW bands he'd worked with like Death Cab for Cutie, Sleater Kinney and Blood Brothers. Would you say there are any specific bands that directly led you to the north of England?

MBL: Absolutely. I was so obsessed with Field Music from Sunderland. They had this S/T record that I thought was just amazing. And the video for the single just so reminded me of Northern England.

And The Futureheads, who are also in with the whole Sunderland scene. And then, Leeds! Sky Larkin will always remind me of Northern England for sure. And Wild Beats, from Leeds as well. They are making some incredibly British music right now. And it's amazing. I'm so fond of them. I met you all in a recording studio in Seattle just a little while after I got home from living in Liverpool. It was like immediately seeing old friends. We talked about Marks and Spencer, and Iron Bru.

KH: How did the northern reality compare with its self-generated musical portrait?

MBL: It was so accurate! Like for example, I got way into The Cribs, I watched this documentary about them, and they just seemed lighthearted and had this great Northern sense of humour. London, and much of the South is just so busy busy, go go go, that I think it's harder to get the friendly vibes from people. I don't think people in London aren't friendly, because I've met so many great people from there, I think it's just inherently so crazy and everything is so fast paced. In the North, it just doesn't seem like that. Even in big cities like Manchester. That city really felt like an accurate picture. When I listen to Joy Division, I totally get it now. Manchester has this incredibly amazing vibe to it, and it really reminds me of Joy Division. I feel lucky to have that perception.

KH: There’s certainly post-industrial similarities between our neighborhoods, your plaid loggers vs our factory towns. And of course there's the rain…

MBL: The rain is very similar! It rains a whole lot in both countries. But it's not just the rain!

KH: I think it’d be fair to say that Manchester and Leeds, like Portland and Seattle, have 'secondary city' statuses in national terms. That relative seclusion seems like a blessing and curse for music, bands have the freedom to develop away from immediate scrutiny... but it’s sometimes hard to get heard beyond city limits. Would you say that’s a common tension that propels a lot of music from our regions?

MBL: Yes, and no. I think for sure it's much cheaper to be an artist in these cities. The cost of living is so much less, and we all know how important that is in this industry. But I think that leads to a saturation of amazing bands in small cities, all struggling to get heard, or migrate to the bigger cities to get discovered. For instance, I'm in Portland, Oregon as I type this, and walking around, it seems like everyone is in a band. Or an artist. And that's good, and bad. There are so many incredible bands coming out of this city, but sometimes it can be a little much. There can be this sort of passive competition. It's weird. In major cities it's much more a struggle. Financially for certain. I think that can really influence the sound of bands musical output. I think in the indie scene that I am involved in, it just seems like a big family. And I love that about it. It makes it feel really great to be involved.

KH: Sounds like the theory that every band or musician in Leeds has lived in (cheap housing estate) The Harolds at some point. Everyone from Hadouken to Henry Rollins, including us. I guess that sheer proximity to like-minded folk breeds creativity. The epicentre is the pinball machine in The Brudenell Social club.