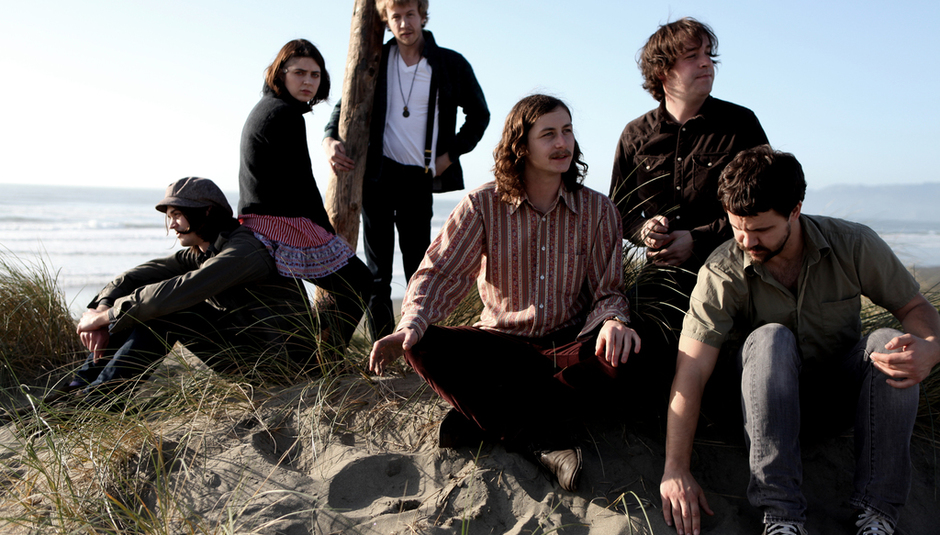 Putting a Californian spin on sludgy rock riffs, Sleepy Sun have managed to get a fair few heads noddin’ since they released their debut Embrace last year. Adding a fried-folk sensation to Black Mountain’s doomy Sabbath-rock, they’ve also managed to work at a sprightly pace that belies their straggly image – two albums released in two years, tours with the likes of Arctic Monkeys plus a host of gigs on UK shores that have had fans of all things riffy speak in reverential tones.

In a further sign that they don’t want to be labeled as slackers, Sleepy Sun have also decided to forgo their native California this summer, heading instead to the sunny climes of Leeds, Edinburgh and Brecon for the psych-folk haven that is Green Man. Before they ventured towards our sun-drenched shores to bring their recent Fever LP to life, guitarist Matt Holliman spoke to us about how they got this far.

DiS: Fever feels like natural progression from Embrace – was there a conscious decision to stay within similar territory on this record but explore it further?

Matt Holliman: Fever and Embrace were written back to back. After recording Embrace we moved to San Francisco and started writing the tracks that would eventually arrive on Fever. This writing took place before Embrace was officially released by ATP and before we started touring full time. So if there's a feeling of continuity between the two, it's simply because there was little to no time between their inception.

If anything, the decision to stay in similar territory was subconscious. We didn't sit around trying to figure out what we wanted to sound like, or how we wanted a record to play out, so to speak.

DiS: What kind of writing process does the band have?

MH: The majority of the tracks on Fever were written and arranged in 2008 while living in San Francisco. It was then recorded in Vancouver BC in April 2009 in between our first US tour and first European tour. The writing process is collaborative with any given member taking the wheel at a time.

This method has its pros and cons: we can channel our collective influences, but often it takes a long time to have a coherent piece of work that we can all agree upon. Usually one member will come up with a rhythm or a melodic pattern and we'll hash it out during practice until we have a few workable pieces and go from there. Additional writing and arrangement took place in the studio, and we were a bit more prepared for this style of creation having previously worked this way (and with the same producer, Colin Stewart) on Embrace.

DiS: What about the lyrics – how do they fit into this process?

MH: There is no formula. Lyrics can inspire the creation of an entire song, or they can be added after the piece is completely written. Usually it falls somewhere between these extremes.

DiS: What kind of records were you listening to while Fever.: was being written?

MH: There wasn't a particular sound or artist we were aiming for while writing Fever. Of course there's the old dogs that seem to attract comparisons: Led Zeppelin, Pink Floyd, Black Sabbath, there's no denying that. Many of our contemporaries and friends supplied motivation for Fever.: Earthless, Assemblehead in Sunburst Sound, Dead Meadow, Howlin Rain, etc... I suppose we're all aiming for a particular spirit of music that has overarching themes and an appreciation of similar artists.

DiS: Listening to your records here in the UK, they do seem to evoke a sense of California. Do you feel that the area has influenced you as a band?

DiS: What’s it like to come together as a band in these areas?

MH: San Francisco has an extremely diverse music scene. When we were first playing shows in the Bay area we would get thrown onto bills with whatever: ambient, electronica, gothic, rockabilly artists, etc. Those were some of my favorite shows, at least in terms of being exposed to artists I probably wouldn't have seen otherwise.

DiS: You’re often compared to the big psychedelic bands of the past: does that bother you?

MH: This doesn't bother us, as many of those bands we’re compared to were influential in creating our sound.

DiS:You’re also often mentioned alongside bands like Black Mountain: do you feel an affinity with acts like them and the music they make?? MH: Sure. We've toured with and been involved with Black Mountain and their affiliated projects for awhile now. Great bunch of musicians and wonderful people to match.

DiS: You're over here in the UK play some gigs soon, do you notice a difference in the audiences you attract compared to back home?

MH: It seems like most Europeans have the whole 'partying really hard' thing down pretty well. We're down with that.

DiS: What about the food and drink over here in Europe – have you been sampling any local delicacies?

MH: Italy is always a great place for that kind of thing. In fact one of the first festivals we're playing this coming tour is Hana-Bi in Ravenna, Italy. Such a great town! We've heard great things about the Green Man festival as well, and are always willing to hook up with some festival food. Fried things in particular. Fried vegetables.

DiS: You’ve also got a reputation as a ‘great live band’ – do you have a preference between playing live and recording?

MH: Recording and playing live are two completely different ballgames. The recordings are snapshots of where the songs have developed up to that point. Additional contributions to songs happen after the fact of recording, so you can expect them to be a little different live. They're continually evolving.

DiS: You’re also releasing a single (‘Marina’), not the kind of thing you might expect from an ‘album’ band like Sleepy Sun. Are you happy to release individual tracks like that?

‘Marina’ captures quite a bit of the encompassing Sleepy Sun sound. Not that it stands as the Cliff-Notes of the record, but it's pretty well rounded, ya know? We aim to make records, not singles. It's fairly easy to spot singles on records that have way more time and effort dedicated to them than the rest of the album. We're not trying to do that.