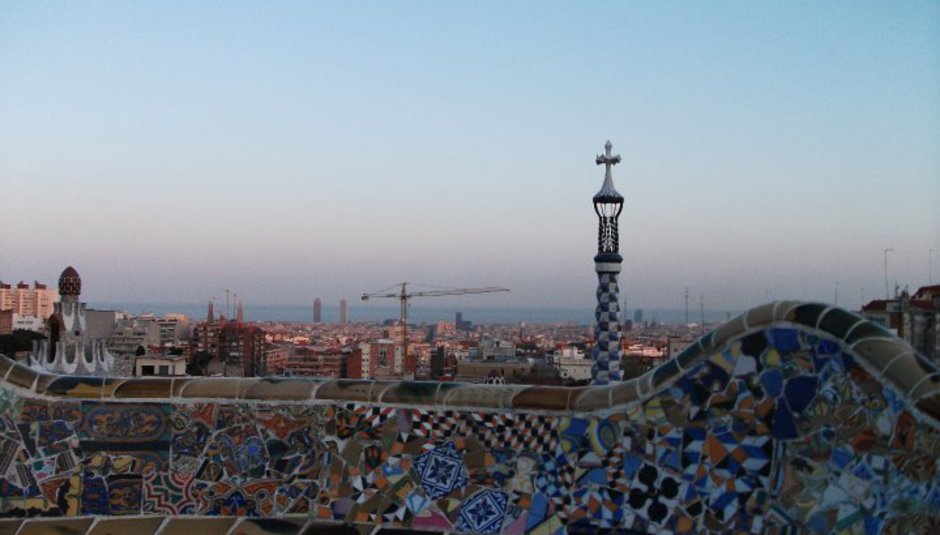 As home to two of Europe’s premier music festivals (click through for our Sonar and Primavera Sound coverage), Barcelona’s credentials as something of an indie hotbed are firmly in hand. In my neighbourhood alone there are countless bars offering live music, from local jazz acts to folk and electronic artists – the narrow streets of Gràcia are perpetually thronging with young city dwellers out for a good time. Expand focus to the city as a whole and it’s all a bit overwhelming. That, in part, is why this article has been such a long time coming (I’ve been living here for a year now): where, exactly, do I begin? There’s the time a friend and I headed to Parc Guell for an early evening stroll only to tumble out of a perfect punk-rock bar in the early hours of the morning; any one of the brilliant shows I’ve seen, touring or local acts both; any number of occasions I’ve been halted by the makeshift stages that pop up around the place; the bar I went to last night even, where the jukebox is both free and exceptionally well-stocked. Barcelona is a vibrant, diverse city: a fantastic place to live and a genuinely exciting one for a music fan to reside in. It is also really, amazingly hot*.

But for all that I love it here, there are times when I’m very conscious of my non-native status. Last weekend was one of them, when over a million Catalans marched through the city in support of greater autonomy for Catalonia. Coming to write this column is another, so instead of me going on a bit, I collared a few of the people I’ve met here into effectively doing it for me. Below lies a wealth of links to all manner of local bands, singers, and venues, courtesy of three ‘industry folk’ each as proud, passionate and accommodating as the other.

Job Description
I book shows with national and international artists I think are worth programming, and I do my best in order that people go see them.

Where are your favourite places to watch live music in the city?
I shouldn’t say it, but I truly think Apolo is the best place: perfect size, great sound, beautiful looks, prestige, tradition and commitment. I also like small, cosy bars like Heliogàbal and the modernist masterpiece that is Palau de la Música.

Do you have a musical highlight of 2010 so far, or anything you’re particularly excited about coming soon?
American-born and Barcelona-based Your Kid Sister has been one of the nicest surprises so far this year, everybody in the audience was in awe when she opened for Lonely Drifter Karen in April; she’s someone I will follow closely. In late March, Megafaun played a gorgeous and magical show also for us: great musicians, great vibes and great beards! And well… Bob Dylan played recently, you know. He’s the king.


Are there any local acts – new or established – you’d like to tell our readers about? Who are your favourites?
I’ve already mentioned Your Kid Sister, though I’m not sure we can consider her a local act but a nomadic one. Luckily for us, she can be seen in Barcelona quite often these days. Then there’s also the folk band Anímic, a collective of multifaceted artists who have recently collaborated with American singer-songwriter Will Johnson (Centro-matic, South San Gabriel) with outstanding results. Someone really close to them and with a similar musical sensitivity is Maria Rodés, who has the most beautiful and haunting voice I’ve heard in years. And last but not least, there’s this young electro-hardcore-punk young band called Furguson. They’re crazy fun, if you don’t dance to their music, you’re dead!

Could you briefly describe the music scene in Barcelona, and what it means to you personally?
I’m uber excited about the current music scene in Barcelona and proud of being part of it somehow. I think we’re living a golden era, with countless artists doing great stuff in a way we haven’t heard before: Catalan and Spanish is being used with a refreshing naturalness and there’s a braveness and audacity in the music that’s being embraced by both the listeners and the media. I guess it’s the result of a generation that has grown up with less prejudices and that has also taken advantage of the new and cheaper technological tools and the internet/blogging facilities. And then there’s the talent, of course.

I’m in Barcelona, but I only have one day and one evening. What should I do and where should I go?
You should walk around, Barcelona is not that big a city. The neighbourhoods of Gòtic, Borne and Gràcia are the nicest in my opinion and have a unique charm. You can also get to the port/beach and get a taste of the Mediterranean, maybe get a paella by the sea. In the evening, you can have a drink somewhere in Raval or Poble Sec and, guess what… go to the Apolo! We have a nightclub every day (except Sundays), and if you get lucky you may catch a good live act.

Job Description
I’ve worked at Houston Party – a record label and booking agency – for five years now, if my brain isn’t lying to me. Or maybe six. I do A&R, communication and publicity. And sometimes I tour manage as well, but not so much lately. I also edit the music website El Lorito, where you can find different sections (reviews of records, songs, movies, news and interviews).

Where are your favourite places to watch live music in the city?
I’d say Sidecar, especially when there are no more than 40 people in the audience, because if the place is packed (its capacity is around 250), it can be difficult to see the stage and musicians. Even more so if you are not a very tall man (as is my case), or if you don’t like to go to the first rows and sweat like a chicken in the farm on a very hot summer day. Also, there’s a bar named Heliogàbal, with a capacity of only 90, where you can sometimes see good shows. I remember one with Mark Eitzel, so brilliant. It was like having him at my living room. When it comes to jazz, I’d choose Jamboree. And Tarantos for flamenco.

Do you have a musical highlight of 2010 so far, or anything you’re particularly excited about coming soon?
I’ve very much enjoyed the new Howe Gelb record made with a band of Southern Spanish gypsies entitled Alegrías. It’s a brilliant musical bridge between Tucson and Córdoba (the Andalucían city where it was recorded) – better and more authentic than the last made by Calexico. The last one by Benjamin Biolay is another winner for me, in the same way than the album that Roky Erickson has done with Okkervil River. And coming soon... I want to listen to the ten outtakes or so that’s getting released around Christmas with the reissue of Darkness on the Edge of Town by Bruce Springsteen.


Are there any local acts – new or established – you’d like to tell our readers about? Who are your favourites?
Yes, there are some. To start, I’ll say three: Fuckin’ Bollocks, Álex Torío and Standstill. And, obviously, the great flamenco artists: Duquende, Miguel Poveda, Mayte Martín... And last but not the least, a singer songwriter from Lleida, Xavier Baró.

Could you briefly describe the music scene in Barcelona, and what it means to you personally?
There are a lot of shows – local, Spanish and international – so from this point of view the scene is very exciting. But there are some things I’m not so optimistic about. For example, there a lot of stupid things around the shadow cast by Manu Chao, trying to sell a ‘Barcelona Sound’ to foreigners that is not connected with our real streets (perhaps only 15% of them).

I’m in Barcelona, but I only have one day and one evening. What should I do and where should I go?
Have a good breakfast in a popular market (La Boquería, for example), no later than 8 or 9am (else you will surrounded by hundreds of tourists), then walk the streets and gardens of Horta. Later go to the beach and sunbathe if possible, before eating a good paella in El Sheriff (in the neighbourhood of Barceloneta), after that go to bar Leo (in Barceloneta too) and dance rumbas to its old jukebox – you have all the paella calories, so you can dance a lot. For the evening, a good walk through the Gòtic streets, some tapas in a Gràcia square at night and after that, a show and drinks in Heliogàbal.

Job Description
We sell tickets for concerts, music festivals and venues in Spain out of our office in Barcelona, working closely with promoters, managers and bands.

Do you have a musical highlight of 2010 so far, or anything you’re particularly excited about coming soon?
My musical highlight of 2010 was Primavera Sound without a doubt! I enjoyed it so much. Grizzly Bear, Pixies, Pavement, and Wilco I loved, as well as my two favourite Spanish bands: Nueva Vulcano and Standstill, who are both integral parts of the scene here in Catalonia. A very special festival.

The city celebrates its ‘Festa Major’ from 23-27 September – the La Mercè celebrations, who is the Patron Saint of Barcelona. Every night there are hundreds of free concerts in the streets. There’s also an independent music festival called BAM, which always has a brilliant, eclectic line-up.


Could you briefly describe the music scene in Barcelona, and what it means to you personally?
The scene here is amazing. Some things I really love include…Standstill, singers like The New Raemon and Joan Colomo, Nueva Volcano, Mishima and Manel. They sing in Spanish, Catalan and sometimes English, and are all big parts of the local scene. We are lucky they play here so much!

I’m in Barcelona, but I only have one day and one evening. What should I do and where should I go?
You should see Gaudi’s Sagrada Familia, Parc Guell and La Pedrera. The Barri Gòtic too. And take a walk in Gràcia, which is a beautiful neighbourhood, like a village just outside the city centre. As for the evening, I really love to drink in Gràcia, especially in a bar called Heliogàbal, which is small but often really crowded, and usually puts on fantastic acoustic shows by some of the most talented acts in Catalonia.

So, there you have it. I realise there is a thriving electronic scene in the city that hasn’t received much attention here, nor have I mentioned the lovely El Guincho or Delorean, but in fairness I do mostly teach English out here, and this will hopefully be rectified at some point. If you are based in Barcelona and think we should be writing about you, do get in touch via my DiS profile.

In the meantime, here are some other sites that might be of interest:

BCN Week - Barcelona’s self styled ‘Alternative Newsweekly’ contains articles written in Spanish and English and does some great stuff, particularly regards offering young writers, artists and poets a viable outlet for their wares.

Relevant and Urban Catarsis also fall under the more progressive banner, though you might want to brush up on your Castellano for the latter.

*this is not always true