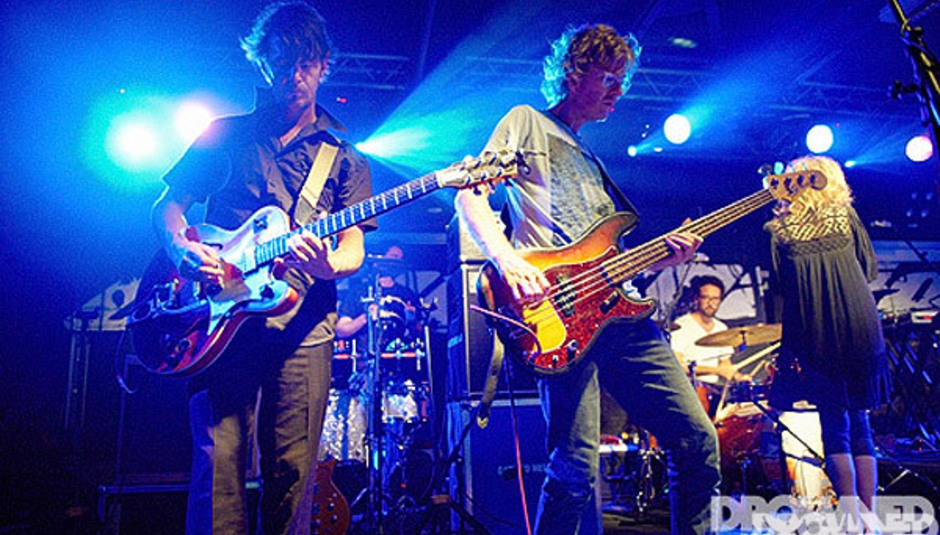 The latest instalment of our weekly Spotifriday playlists, as comprised by bands and artists who featured on the site in the past few days. This one features none other than Standard Fare, Tom Jones, Women, R.E.M., HEALTH, The Wave Pictures, Broken Social Scene and more. Click here to listen to this week's playlist. Enjoy it.

Sheffield's Standard Fare scooped the all-important Single Of The Week award, as decided by the ever-present and ever-brilliant Singles Lady Wendy Roby. Read what she had to say about it - and a few more excellent cuts - by clicking here.

You just can't keep a good band down. Not that Los Campesinos! were ever 'down' at all. But now they're definitely up, and announcing the release of a new acoustic/alternative version EP, featuring many tracks from their current one, which also happens to be the name of this track. Enjoy it and all.

First time for everything - including a Tom Jones track popping up on the Spotifriday playlist. Although I actually suspect this may have happened once before. But that time was the first time. Anyway, he was sounding off to us this week in an interview. He wasn't very happy about some financial bod at the record label sticking his nose in, that's for sure. Stay tuned for the full interview next week.

They don't come much more morose than this lot. Dark and drizzly is what they are, but also quite very good. They revealed a few juicy details about their upcoming record this week. Read all about it here. Pledge your support.

Women's debut self-titled record was - and indeed still is - an absolute corker. Unfortunately their new record leaked. But it's coming out properly soon, and you can find out more about it here including a free mp3. That's something to get your teeth into, whilst I still can't work out the lyrics in the chorus to 'Black Rice'.

Alexander Tudor summed up the new Sun Kil Moon album in the following words "Ultimately, an interesting album within its constraints rather than a hands-down triumph, but there were a lot of constraints…". The review was a bit more in depth than that, however, so you'll do well to read it or just listen to the whole thing on Spotify.

In depth is also a phrase you could use to describe Andrzej Lukowski's re-appraisal of the re-released Fables Of The Reconstruction, which got a well-deserved 10/10. Anyway, read it all here, including an interesting discussion in the comments section.

We like HEALTH. We like Gold Panda. So it made sense to put this on for you, especially as HEALTH released ANOTHER remix album. Is there any need for it. Probably. Is it actually any good? Who knows. Find out here!!!

Spotify lists this album as Alan Pownall Spotify Album which is an unconventional if completely hilarious and functional title for a record. There was another Alan Pownall record reviewed this week, however. This time it's True Love Stories - which is also a fairly functional title. It's full of honest pop songs, apparently. Read the review.

The Wave Pictures do write the most brilliantly bad lyrics, evident none more than in this song. But they should be National Treasures. We know they will not be, so we'll just have to hold them close to our individual bosoms instead. Read our interview with the fellows.

This new Autechre album release surprised us a little. Still, it was the kind of thing you'd like to be surprised with. As opposed to, say, an intruder in the home. We reviewed Move Of Ten here.

I'd just prefer this to be called 'Texaco Bitches'. Photoset of their live Drowned in Sound show here.

The assessment of BBC's latest one was something like: "You've got to hand it to Bombay Bicycle Club: carving a whole record from this minimal aesthetic is brave, to say the least. As the band nakedly expose their talents in a brazen act of plucky self-confidence, we know these boys have balls, even if they haven't dropped yet." Ha. Testicles 1, 2, 3.

It was a choice between the Beasts and the XX. With little competition, in truth. This underrated track is fit to close any album. Except for maybe some of Kool Keith's more unconventional works. Read Mike Diver's review of their show at the Roundhouse here.