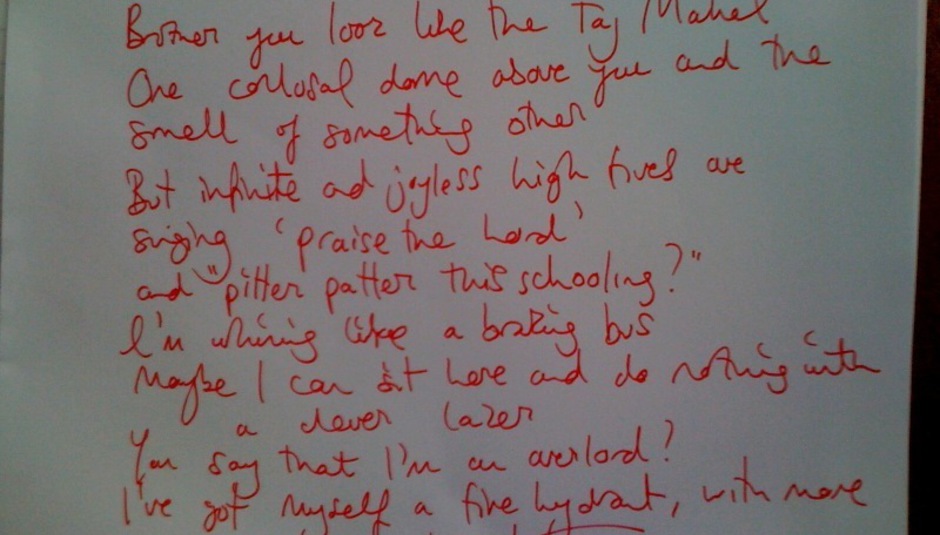 One of the things I like most about The Shins, is their knack in pitching lyrics on the right side of impenetrability. For it seems to me the best lyrics – the ones that compel you to take out your microscope and do more homeworking – are those that proffer enough original imagery to spark your attention, but which still communicate useful stuff about the ol' human condition. And it’s not easy to do; you can end up all wibble and not enough meaning - or worse, Too Much Meaning and not enough delicate. What we’re talking about here, of course, is enigma – and like most mysterious, unpindownable things, there is an optimum quantity. Enough to make you want to know more, but not so much the song in question becomes completely blackened; you can’t see in.

'Schoolin’' is the latest in a (still short) line from Everything, Everything, and I think they do write the sort of lyrics you want to copy out in your fanciest, serify hand - which is why I mither their press person for a lyrics sheet whenever they unleash a seven. For me it's a song about not knowing, and how hallowed halls and turreted language obscure the most important snippets of knowledge; the essential bits we apes need to know, if we're to carry on calling this planet ours. Or you know, maybe not, perhaps it's about sponge baths, Peter Andre, wheelie suitcases. In the end it doesn't matter, when a pop song is this artful and intricate.

One of the more unfair and yet very amusing things about getting old, is having an excuse to stereotype young people. For one thing, it helps you reconcile the fact that your twenties have long since disappeared down the time toilet. And in their place, you get to imagine an Imagined Twenties person, who is constantly having it off to the point that they can barely fit in sleeping and eating. I know this – like most clichés - isn’t strictly true, and I know the rank spectre of people in their thirties pretending to be in their twenties is even dreader; the concept of the ‘Kidult’ makes me want to devour my own brain with béarnaise. And yet. Here is the taybly young Joe Worricker, with a song called ‘We Hug In Bed’. And I am OUTRAGED.

HUGGING IN BED, everyone. At twenty one! I mean, by rights you shouldn’t even have a bed. For what use have you of sleeping furniture when there is all that wild, no-names uckfing in alleys to be done? Worse still, though the press release talks of Joe’s ‘magical lyricism’ the neon headline lyric turns out to be ‘He may have some ugly feet, but the rest of him is nice and sweet’. Quite apart from this being pletely barrassing; and before you remember how in any event, ALL men’s feet are ugly (and if we women allowed such things to get in the way of a good snog, the human race would have died out thrimpty million years ago); you have to contend with Foghorn Joe's singing 'style'. Which frankly gives me triangle shivers. I’m afraid I hated this.

It won't come as a surprise to find that a pop record this achingly lovely should have sprung from a Hot Chip-affiliated label. After all, if the Chips know how to do anything, it's pulsing melancholy; slow longing; they've got that happy/sad axis DOWN. But all obviousness aside, 'Garden' really is a gem - the sort of bouncy-ball-basslined, sun-fading, melodic bit of delightful that could soundtrack any Summer Pash. While you're still on holiday it'll sound Just Right; all perfect, written-just-for-you positives. And when you come back to your grey, you'll see it for the pangy bit of sad it really is. Much like Grosvenor's 'Nitemoves', this is a bit of a triumph.

Veronica Falls have written a pop song about everybody’s favourite place to top themselves and it is really really good. I mean, never has singing along to a graphical location where peepul choose to end it all seemed quite such top larks. This is indie of a very particular, very British, timeless and guileless sort, and it's also enough to remind a person why they plumped for plaid over pop in the first place. Terrific.

Robyn – ‘Dancing On My Own’ (Konichiwa / Island)

Robyn seems to be on a mission to turn all my favourite solitary pursuits into the sort of thing that would get a person certified. And though I played the ish out of 'The Girl & The Robot' last year – with all its wonderful heartbreaking about watching MTV alone while ‘no one’s playing songs for me’ - I am absolutely not having this. For one thing, ‘Dancing On My Own’ does not have an irresistible hook; something that Robyn rarely skimps on. But also, as any wise/mental person will tell you, dancing on your own is an act of rather special abandon [and not in an I Will Wear Purple way – because if Wearing Purple is the height of your abandon, that is PAFFETICK and you don't deserve a pulse]. Also, I’m not sure I am ever happier than when I am giggling to myself and doing Rosie Perez In The Opening Credits Of Do The Right Thing - and not just because it was one of my formative brushes with fierceness. Anyhoo, even if I wasn’t a nutty tart who does things alone in her bedroom, Robyn also appears to be wearing some sort of earring-brooch combination that attaches her ear to her jumper by way of chains. And that is very dangerous. Careful love, it only takes one windmilling twat and you'll have more than a crap boyfriend to cry about.

Seemingly hellbent on destroying their own speakers, The Easter Island Statues are now here to break yours. And you'll probably let them, with this slight, muddy bit of garage pop that still has a firm grasp of the pop reins.

The Declining Winter have a well timed curio about the current Pan-Galactic Soccer Tournament, and it is not half bad. This seems a feat of strange magnificence given our other Wewld Cup musical options - even if the single itself is not without flaws. You see, though there is a gratifying absence of ‘our boys’ in the lyrics, they have included the line ‘Bring back the old silverware’. And even I know you win a gold one.

Stairs To Korea – ‘Paul, Is This How You Wanted?’ (Brainlove)
Stairs To Korea's flights of fancy on Twitter really are a joy. But sometimes I forget that their raison d'etre is not being amusing for our entertainment on the internet, but hactually making records. Like ‘Paul, Is This How You Wanted?’ - which is dead, dead odd and quite, quite good.

Frightened Rabbit - ‘Living In Colour’ (One Little Indian)
It would be wrong of me to suggest that there is a little of the Big Countrys about the latest Frightened Rabbit single. It might even be the tiniest bit simplistic – if by ‘simplistic’ I really mean ‘xenophobic’. So I shan’t.

Pulled Apart By Horses - 'Back To The Fuck Yeah' (Transgressive)

Tracey Thorn - ‘Why Does The Wind?’ (Buzzin Fly)

Wendy is on Twitter here. She has decided to become proper, fountain pen-pals with her 1000th follower, for no reason whatsoever.