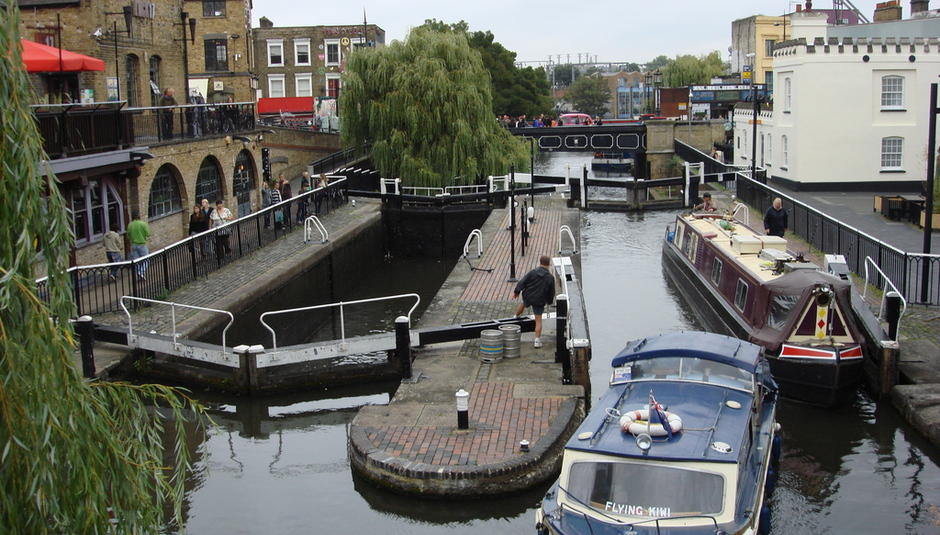 Do you know what I love about Camden? It's the people. If you discount the tourists and examine the locals you will find half the people try too hard, and the other half have just stopped trying. All the punks with their painted leather jackets and hair spiked up just so, the scenesters dressed in ironic t-shirts to the hash dealers on the bridge. They either don't give a fuck or give slightly too much of a fuck, and it's fun trying to figure out who has character and who's a caricature. Whichever way you look at it, the place is a visual treat, with gaudy day-glo nylon rubbing shoulders with shiny black leather. Even if the character it had fifteen years ago has eroded thanks to a gradual invasion of chain coffee shops and eateries, the heart is half-eaten and still just about beating.

Which brings us neatly on to the Camden Crawl, sponsored this year, as it was the year before, by a popular brand of cider. Theirs is not the only corporate endorsement this year, with the outdoors stage being backed by a provider of energy drinks. They sponsor the curiously named Bedroom Jam arena, which is my first port of call. Funny that they've called it an arena actually, as it's basically just a fenced off street with a stage stuck in the middle. Hanging from a window by a noose is an oversized teddy bear. Presumably this is what happens when you give your children drinks that have taurine in them before bed time.

The first band I see are Dissolved In, a four piece from Reading. They're Rock Show fodder: direct, emo, Americanized. The crowd is unmoved by their well drilled machinations, unleashing polite half century style applause. It's too early in the day still, and everyone here is waiting for Kasms. When they arrive onstage, it's a different story. They're a much better band than they were a year and a half ago, with their furious spastic energy pulled back to a level of control that wouldn't have seemed possible back then. Frontwoman, Rachel Mary Callaghan, is sporting a denim jacket with an excellent Metallica patch on the back that is either the greatest charity shop find of all time or handcrafted by the the skilled artisans of Dalston. She's really started to sing now instead of just scream and flail, and the band push forward their figurehead with some force, sounding weirdly like X-Ray Spex without the irony. 'Taxidermy' is great, and Holy Christ, some people are even dancing. In the daytime, outdoors, in the gloomy afternoon. Maybe the sponsors are piping in some kind of gas.

Leaving when they finish, I head towards the Barfly, where John Kennedy is hosting some live sessions. It is, to use base slang, bellybutton to arsehole in here, and the queue for the bar is seven deep. After fifteen or so minutes of Summer Camp taking the indie-pop fight to the largest crowd of their career, I decide to get some air and a drink elsewhere. But the venue, already tearing at the seams, already well over capacity, is still admitting people, who presumably want to come in and camp out for The Drums. It takes a very, very long time to get out of the crowd, and outside, catching my breath, I hear a woman seriously ripping into the security staff about how dangerous it is in there. She is my new hero.

That Fucking Tank begin their sonic demolition of the Dublin Castle as the queue for them builds steadily outside. Inside, two community support officers are doing a quick head count against venue capacity. It's absolutely fine here. That Fucking Tank are making a lot of noise for a two piece, a big guitar sound with intricate patterns layering over bone crushing drums. Never has a band name seemed so appropriate.

Their performance is later topped by perpetual festival winners Bo Ningen at Dingwalls. Before they start, their crowd assembles, and it's a genuine half and half mix. You've got the young and the hip squeezed in to tight jeans and sharp haircuts; and then you've got older gentlemen with slightly faded t-shirts and looser denim, who look like they might be members of CAMRA. Both sub-groups have been brought here by word of mouth, and once more, word of mouth is right on the fucking money. Bo Ningen seem to have slowed down and gained focus a touch since I saw them last. They're still one of the most thrilling bands to watch on Earth, full on psych rock, changing key and tempo and generally freaking out at a moments notice. Taigen is a mesmerizing presence, dressed like a cult leader in a black robe, and a superb bassist. The guitar porn is off the scale elsewhere too, with grown men open mouthed at Kohhei and Yuki's interplay and soloing. For the first time in several years, I see other guitarists bow down en masse and mouth the words 'We're not worthy'. They could have been screaming those words, with the volume and intensity of the show, honestly, it's hard to tell. (N.B: They're playing Barden's this Thursday, for five pounds sterling. If you've never seen them, I can tell you right now that's going to be the best fiver you've spent on a gig all year)

After that, Teenage Fanclub were always going to be a bit of a non-event, but they proved ever likeable, even starting the most mild-mannered, happiest moshpit in history with 'Everything Flows'. There's no 'The Concept' in the set, which was a suprise, but 'Your love is the place where I come from', despite a tiny bit of a fumble early on, is the best song anyone played all day. They'll have won a few new fans tonight, and kept the old ones happy. At this stage of their career, that's better than good enough.

Part two of Tom's adventures hereand look out for our In Photos gallery coming up tomorrow...

In Photos: Tiffany Page @ Sheffield U...