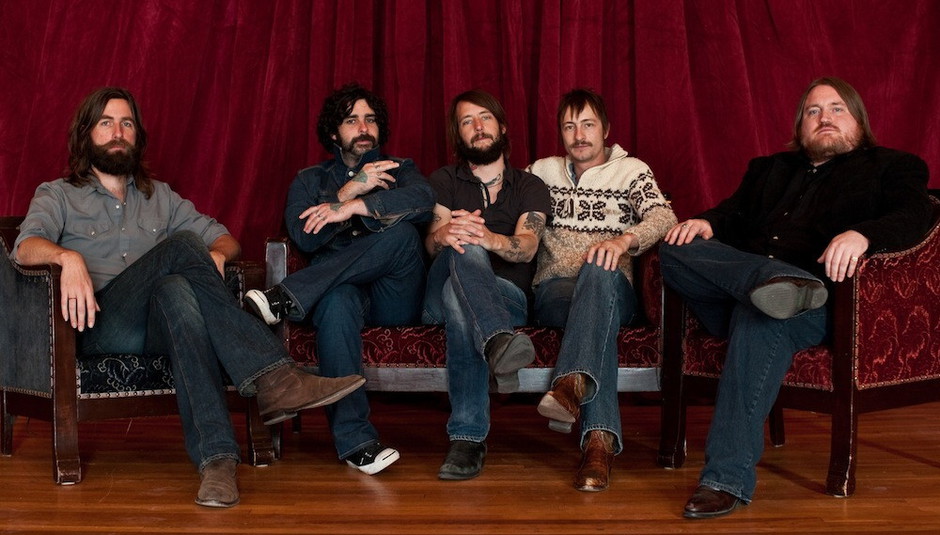 Seattle five-piece Band Of Horses return next week (May 17th) with the release of their third album Infinite Arms. Having released their first two albums Everything All The Time and Cease To Begin on Sub Pop to almost universal waves of critical acclaim, their latest offering will be their first as major label recording artists, having recently signed to Columbia Records. With a UK tour set for June, including a couple of stadium dates with Snow Patrol, Band Of Horses look set to infiltrate the mainstream any time soon.

DiS managed to grab a few words with bass player Bill Reynolds during their recent brief visit to British shores...

DiS: Three years have passed since the release of Cease To Begin. What have you been up to during the interim period?
Bill: We've been touring a lot, hitting places like Japan and Australia. In between touring we went in to the studio a few weeks at a time. Even if we were not on the road or in the studio we were at home or some place remote writing. Each of us had our own place to hide out and write.

DiS: I read in a blog somewhere that you had twenty-seven songs written prior to recording Infinite Arms. How did you arrive at the final tracklisting and will the fifteen songs that didn't make the record be released at some point in the future?
Bill: Well, it ends up in a lot of ways being the path of least resistance. Some things were obvious contenders out of the gate and others were so left field that it took a second to get friendly with them. A few songs just fell off the limb. We started in Alabama and basically documented ourselves trying to recreate the demos. There are songs that we fully flushed out and mixed that we may release later and there are those that may never see the light of day except for the demo versions. It's always good to have backlog stuff cause you never know when you might want to revisit something...

DiS: You also mentioned initially that the new album was going to be called 'Night Rainbows' but then earlier this year announced it would be called Infinite Arms instead. What was the main reason behind this and did the final tracklisting also change as a result?
Bill: Night Rainbows was just a fun name we came up with one night after a session looking at a ring around the moon. Ben (Bridwell) threw it out there and it caught on in the blogs, like a litmus test for fans ;-) Ben had decided for a while that we were gonna name the record Infinite Arms. It's kind of an inside riddle of sorts. With regards to the tracklisting, we fiddled with the order a little but not because of the title.

DiS: Current single 'Compliments' is possibly your most accessible and radio friendly moment to date. Was it a conscious decision to release it as the album's opening single for that reason and do you see it as being representative of a slight change in direction for the band?
Bill: Well it does represent the band very well because it is a live performance captured to tape. This record is our most collaborative record to date and the song represents that in the performance. I'm not 100% sure why we released it as our first single, but I guess it had to be one of 'em, right?!?

DiS: Of the twelve songs on the album, which ones are the oldest, which made the cut at the last possible moment and ultimately, which would you say are your proudest achievements on Infinite Arms?
Bill: I'd say 'Older' was the song that had been around the longest. The last song to make the cut was 'Bluebeard'.. Our proudest achievement was probably making 'Factory'. I had been listening to the radio station in Atlanta that plays some great Symphonic 20th Century music, and it took everything I had to not put every instrument in the symphony on it..!

DiS: You recently played at Koko in London. How was the show from the band's perspective and were the new songs well received, considering the majority won't have been heard before by a UK audience?
Bill: It's always a toss up as to whether or not to play new songs before they are released. With this tour, we knew we had to learn them and play them well so we threw them out there. They were all well received, which was great as we love playing Koko. We were like "Here we go, watch us try this!" I guess it can be exciting to see if we make it through or not...

DiS: You're back in the UK in June for some more shows, most notably supporting Snow Patrol. Are you fans of Gary Lightbody and co's work?
Bill: We love Snow Patrol and are very stoked to play with them.

DiS: August then sees you return one more time for the Reading and Leeds festivals. Will you be doing anything different such as a cover version or old song you haven't played for a long time for example as a one-off for such an occasion?
Bill: It is a real honour to play these festivals. We will have been on tour for a few months at that point, and knowing us we will have something cooked up. We are always tossing around new song ideas, and after doing the Jools Holland show with strings and horns you never know what might be up there.

DiS: Over the course of your career, if you had to choose one album or song as the definitive Band Of Horses statement, what would it be and why?
Bill: That's a hard question. Most artists always love their latest work, right? This record is the definitive Band Of Horses line up and the first record we have all done together, so I guess I'd have to go with Infinite Arms.

DiS: What does the rest of the year have in store for Band Of Horses?
Bill: Hmm, tour, play shows, tour, Christmas, tour...!

Band Of Horses are on tour throughout the summer and can be seen at the following venues:-