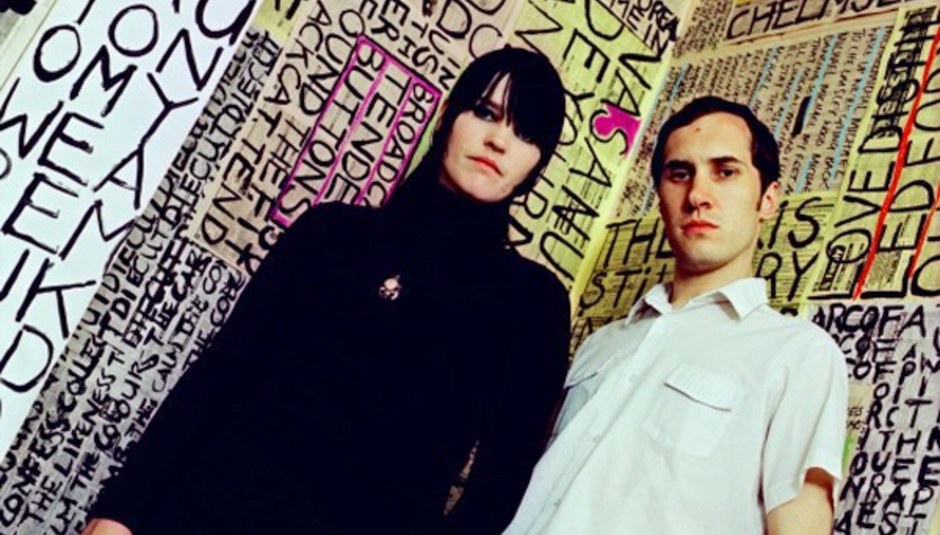 Sixty years ago, on the very spot where Broadcast are playing tonight, stood a Victorian brick tower. Originally for pouring molten lead to create buckshot for the muskets of empire, the Royal Festival of Britain in 1951 saw the tower proudly housing a state of the art radio telescope, which would for public edification beam images of the crowds to the moon and back, images which would appear on a small screen in front of them seconds later. Billed then as ‘likely to create an impression’ what a strange attraction it seems now. Who would tweet about a delayed narrowcast, wrapped in a creaky public promise? Who would see human progress on the South Bank, forces of history, mastery of space, pride in industry, manufacture, science, the forefront of a new world?

No one would, that’s who. The future, as a concept, is retro. British industry has been destroyed by successive neo-liberal governments. Technology is personal, consumable, demonstrated on the global daises of Silicon Valley and in our twitchy hands. No longer do we accept public promises, or trust our salvation to the big stories of science. Telescopes elicit shrugs. But as far as Broadcast carry meaning with their mesmeric, beautifully-worked electronic psychedelia, they provide a story of the ghosts of a past Scientific Age. Enlightenment pop, in a way, but with all the darkness and paranoia of its flipside – Anti-Enlightenment pop is more like it.

Facing each other, marked out by enclosures of wires, keyboards, desks, assorted electronics, James Cargill and Trish Keenan begin building up a set of serious guile, the competent accretion of a decade’s thoughtful knob twiddling and psychedelic exploration that has seen them move from what could almost be called a twee band, a mid-90s Warp oddity, to a fully fledged experimental outifit. Tonight harmonic depths are adroitly plumbed, highs are beautiful and plentiful, texture is tightly controlled. Loops of floral print batchelor space-pad retro jostle with narcotic drones. Throbbing bass freely associates like Gang Gang Dance submerged in chaos, big freeform passages are ladled with electronic texture. A bass guitar is produced by Cargill, and with characteristic deliberateness they set down some of their Fronglais lounge pop against the psychedelic eddying. Later the motorik guitar of Stereolab is de-indiefied, turned into a gangly roughened repetition of chords. All of this contributes to what might be called molecular pop, where the vintage electronic motifs of a primitive positivism jostle with emotional nostalgic landscapes, where each examined note is layered 50 times over and wrung out for every atom.

The radiophonic electrickery of their later work benefits from tonight’s auditorium, where the roomy surround sound can have the wonky bleeps and fairground concrete fire at you from all angles. At times it’s a bit like being inside an old Doctor Who episode directed by The Grateful Dead, where the Doctor is deranged on acid and the Daleks have a sophisticated understanding of sonic texture. Trish Keenan’s vocals are as spacious as the Tardis, with deft control over the reverb knob she creates enormous dripping caverns of sound, occasionally performing a Cocteau Twins liftoff into ether-space where her chanteuse stylings are mixed with the swoops and squawks of the extended technician.

A techie friend once told me the most workable way to understand a computer was a mixture of voodoo and science. And this is precisely what Broadcast deliver. Their darkness conjures something lost, a dark yearning for the atomic age, where science represented powers that bordered on the theological. In which strange forests might reveal a cold war contraption of grey and mysterious purpose, where the eccentric inventor soldering music chips is put in the same trajectory as Hiroshima, where Ritalin and Guitar Hero peripherals were not yet the great blackboxing of youth, and there was mystery in a crystal radio.

Tonight the projection behind them spooled out images of pastoral electronica, grey country skies criss-crossed with telephone wires, pylons and spires. Diagrams of science, rough molecular geometries transposed over trees, a sort of Huxleyian noble-science, experimental witchcraft. A particularly dramatic sequence shows the sweet nostalgia of a birthday candle, curdled by ghostly atomic age effects before snuffing out. When Keenan steps out in front of the projector with her plain shift dress, the molecular patterns on her body make her appear diagrammatic. Against this, her vocals stood even more intensely as the pure residue, the hauntology in the machine, the tragedy of the soul imperfectible by science. The festival of Britain officially sought to ‘make visible a Brave New World.’ With all of the dystopian ambiguity and retrofuturism that phrase implies, Broadcast tonight do the same.